They really want you to know that the guy in the first story is a hippy, don’t they?
What do you guys think about the watch ad on the third page? It seems like a scam to me. Helps if I actually read the article. 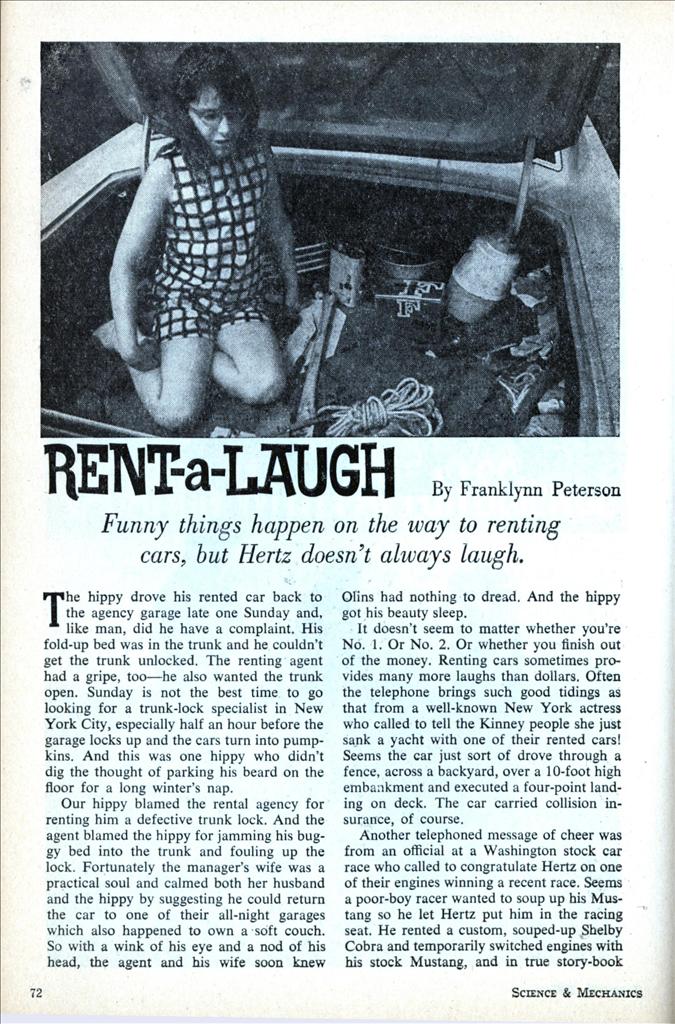 The hippy drove his rented car back to the agency garage late one Sunday and, like man, did he have a complaint. His fold-up bed was in the trunk and he couldn’t get the trunk unlocked. The renting agent had a gripe, too—he also wanted the trunk open. Sunday is not the best time to go looking for a trunk-lock specialist in New York City, especially half an hour before the garage locks up and the cars turn into pumpkins. And this was one hippy who didn’t dig the thought of parking his beard on the floor for a long winter’s nap.

Our hippy blamed the rental agency for renting him a defective trunk lock. And the agent blamed the hippy for jamming his buggy bed into the trunk and fouling up the lock. Fortunately the manager’s wife was a practical soul and calmed both her husband and the hippy by suggesting he could return the car to one of their all-night garages which also happened to own a soft couch. So with a wink of his eye and a nod of his head, the agent and his wife soon knew Olins had nothing to dread. And the hippy got his beauty sleep.

It doesn’t seem to matter whether you’re No. 1. Or No. 2. Or whether you finish out of the money. Renting cars sometimes provides many more laughs than dollars. Often the telephone brings such good tidings as that from a well-known New York actress who called to tell the Kinney people she just sank a yacht with one of their rented cars! Seems the car just sort of drove through a fence, across a backyard, over a 10-foot high embankment and executed a four-point landing on deck. The car carried collision insurance, of course.

Another telephoned message of cheer was from an official at a Washington stock car race who called to congratulate Hertz on one of their engines winning a recent race. Seems a poor-boy racer wanted to soup up his Mustang so he let Hertz put him in the racing seat. He rented a custom, souped-up Shelby Cobra and temporarily switched engines with his stock Mustang, and in true story-book fashion he won the race. A suspicious race official jotted down the engine’s serial number, however, and traced it back to Hertz. Apparently this is one of the unadvertised specials which rental agencies would rather not offer the renting public.

Silence is another virtue which makes rent-a-car people nervous. When a car is overdue, how can they know whether the honest but absent-minded customer is stranded somewhere by one of those unadvertised mechanical bugs, or doesn’t intend to return under his own power. Rented cars in New York State, at least, have distinctive license plates, a number followed by a “Z” and then four more digits. Police are periodically issued lists of rented cars reported “absent without leave,” so every license plate with a “Z” is given extra scrutiny.

New York’s finest recently embarrassed one young man who forgot to renew his rental agreement. He hadn’t intended to steal the car—that would have been dishonest, you see. And money certainly wasn’t his problem because the officers who noticed the missing rented car found tens of thousands of dollars worth of forged checks on the front seat. Seems the absent-minded driver had rented the car to drive around town while cashing checks he and accomplices had stolen from an anti-poverty agency. Let Hertz put you in the hot seat.

Speaking of hot seats reminds one of hot cars, another bug the rental people haven’t been able to avoid. Get-away cars that try harder don’t bother the agencies half as much as the fact their robber customers never seem to return the car when their deposit has been used up! Running gun battles do very little for a paint job or upholstery. And if the FBI gets in on the case—as they do in every bank stick-up— the agency can write the car off as good as gone. After the “feds” finally do tow the evidence back to the garage, the upholstery has been taken apart with the proverbial fine-tooth comb and fingerprinting dust covers every metal surface—just like a car newly worked on by the average body shop.

One unnamed agency in a violent big city had to get rid of another car recently although it was returned in beautiful shape. Not only had the jack and the spare tire been left in the trunk, but also a dead body. Superstitious garage workers wouldn’t go near the car. Among other questionable merchandise returned in trunks have been a couple of machine guns and a bazooka, not to mention the usual list of lost valuables: tents, gloves, cameras, overshoes, picnic lunches and children. Yup, a couple of them have been found sleeping in back seats after the cars were checked in.

A bigger problem than extra merchandise on the return trip is what’s not returned. Jacks and spare tires rate highest, but mirrors and wheel covers do all right too. The case of the missing spare tire is no longer a joke at renting companies, but a several thousand dollar per month headache. Each car that is returned is supposed to be checked for a spare tire, but when a block-long parade of car renters is waiting to get out of the driver’s seat on a Monday morning, tire checks fall by the curbside. Most often the tire simply disappears during the rental period—the renter, of course, claiming there never was a spare. After some agencies started making the would-be renter sign a receipt for the fifth wheel, the fun really started. Less ingenious hustlers would exchange a well-balded spare for the rental company’s new one. but cleverest of all were those jokesters who returned a bicycle tire or a spare motor scooter wheel.

Mileage is a perennial gimmick the renting companies use when battling competition, but some of the customers have their own ideas on the subject. A young California miss took Hertz up on their one-month special but ended the deal with the odometer only a few miles more distant than a month earlier. Remembering used-car lot tactics, some ingenious garage hands wondered if she had driven the car backwards to save mileage charges but overshot the mark. Which turned out to be partly correct—she had driven backwards. The young lady needed parking practice to pass her California drivers license exam and didn’t want to dent her own fenders. There are many ways to turn back the odometer, but guys who show up with 43 miles on the odo and $18 in gas bills really make the renters weep.

At the other end of the great mileage battle, Kinney ended up with what may be an all-time high. 14.000 miles during a four-month rental! Looking a bit beyond the odometer, the agency discovered that two dozen of its cars had been turned into a profitable gypsy-cab business during the summer, which is a violation of the rental agreement—but you gotta get caught first! What peeved the Kinney people even more than the generous free mileage they were stuck for, were the holes drilled top-side for the traditional taxi light.

Police are forever unearthing ways by which people try harder thanks to rented cars, or station wagons in one case. Wayward men in one suburban community were picked up and catered to by a team of professional young ladies who worked only part-time. They didn’t want their neighbors to recognize the family station wagon being used as a make-shift motel, so they let a rental agency put them not only in the drivers seat, but into a simple portable bed as well.

A suspicious cop caught on to the gimmick, pinched the young ladies, and dented the agency’s unwitting but brisk business in station wagons. One of the arresting officers swears he overheard a young lady of Italian extraction telling one of her station wagon customers who was treating her a bit rough, “Itsa Hertz!” •