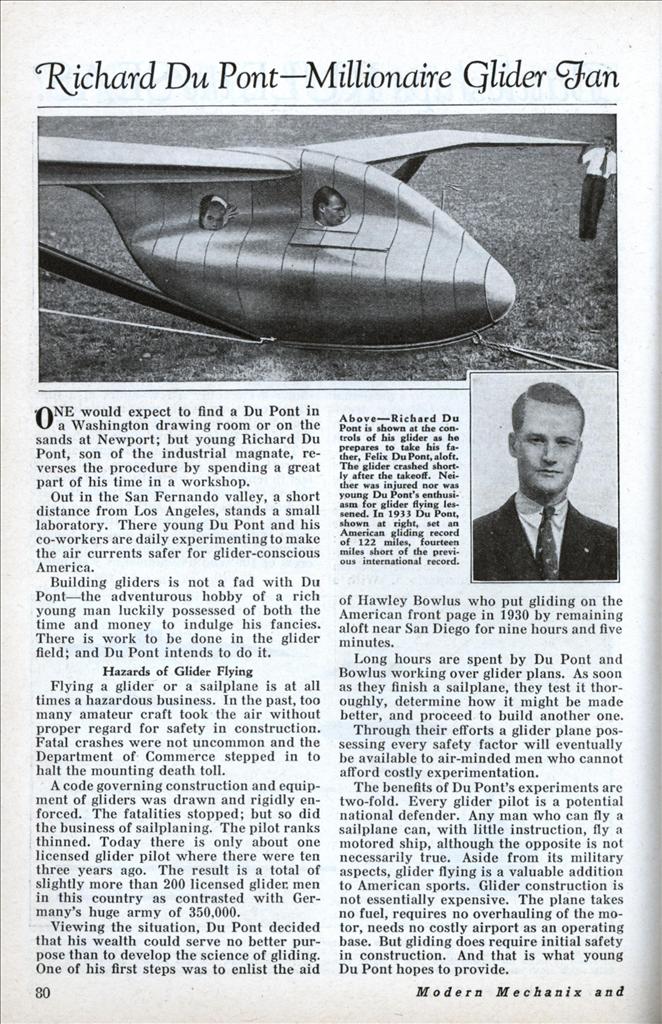 ONE would expect to find a Du Pont in a Washington drawing room or on the sands at Newport; but young Richard Du Pont, son of the industrial magnate, reverses the procedure by spending a great part of his time in a workshop.

Out in the San Fernando valley, a short distance from Los Angeles, stands a small laboratory. There young Du Pont and his co-workers are daily experimenting to make the air currents safer for glider-conscious America.

Building gliders is not a fad with Du Pont—the adventurous hobby of a rich young man luckily possessed of both the time and money to indulge his fancies. There is work to be done in the glider field; and Du Pont intends to do it.

Hazards of Glider Flying Flying a glider or a sailplane is at all times a hazardous business. In the past, too many amateur craft took the air without proper regard for safety in construction. Fatal crashes were not uncommon and the Department of Commerce stepped in to halt the mounting death toll.

A code governing construction and equipment of gliders was drawn and rigidly enforced. The fatalities stopped; but so did the business of sailplaning. The pilot ranks thinned. Today there is only about one licensed glider pilot where there were ten three years ago. The result is a total of slightly more than 200 licensed glider, men in this country as contrasted with Germany’s huge army of 350,000.

Viewing the situation, Du Pont decided that his wealth could serve no better purpose than to develop the science of gliding. One of his first steps was to enlist the aid of Hawley Bowlus who put gliding on the American front page in 1930 by remaining aloft near San Diego for nine hours and five minutes.

Long hours are spent by Du Pont and Bowlus working over glider plans. As soon as they finish a sailplane, they test it thoroughly, determine how it might be made better, and proceed to build another one.

Through their efforts a glider plane possessing every safety factor will eventually be available to air-minded men who cannot afford costly experimentation.

The benefits of Du Pont’s experiments are two-fold. Every glider pilot is a potential national defender. Any man who can fly a sailplane can, with little instruction, fly a motored ship, although the opposite is not necessarily true. Aside from its military aspects, glider flying is a valuable addition to American sports. Glider construction is not essentially expensive. The plane takes no fuel, requires no overhauling of the motor, needs no costly airport as an operating base. But gliding does require initial safety in construction. And that is what young Du Pont hopes to provide.