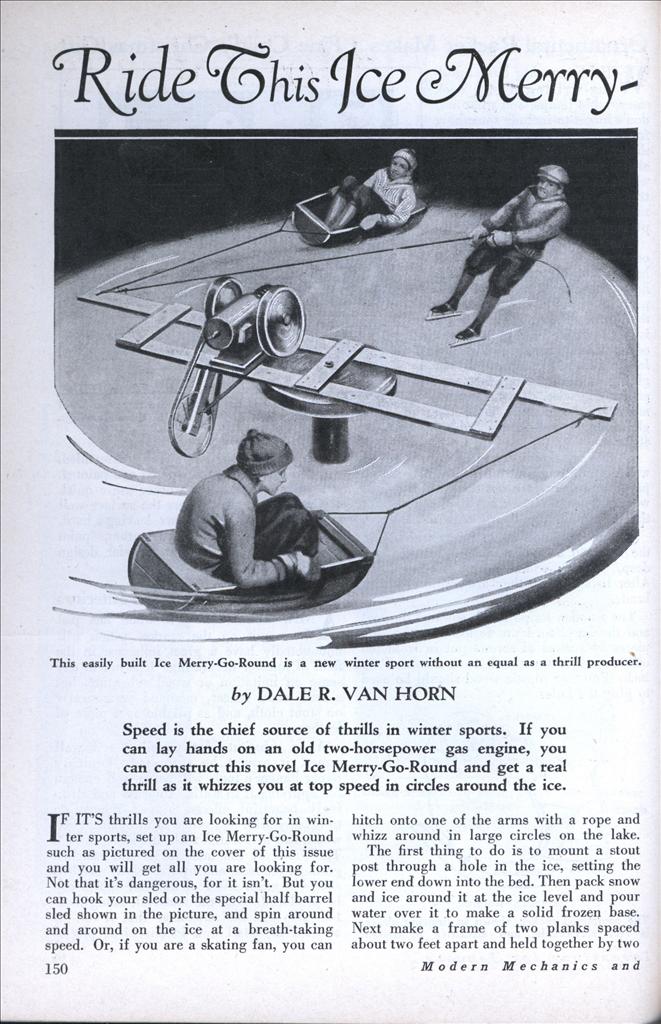 Ride This Ice Merry-Go-Round for Thrills

Speed is the chief source of thrills in winter sports. If you can lay hands on an old two-horsepower gas engine, you can construct this novel Ice Merry-Go-Round and get a real thrill as it whizzes you at top speed in circles around the ice.

IF IT’S thrills you are looking for in winter sports, set up an Ice Merry-Go-Round such as pictured on the cover of this issue and you will get all you are looking for. Not that it’s dangerous, for it isn’t. But you can hook your sled or the special half barrel sled shown in the picture, and spin around and around on the ice at a breath-taking speed. Or, if you are a skating fan, you can hitch onto one of the arms with a rope and whizz around in large circles on the lake.

The first thing to do is to mount a stout post through a hole in the ice, setting the lower end down into the bed. Then pack snow and ice around it at the ice level and pour water over it to make a solid frozen base. Next make a frame of two planks spaced about two feet apart and held together by two other pieces as shown in the accompanying plans. The wheel underneath is mounted on a pin driven into the post.

Now mount a farm engine preferably of the air-cooled type, in the position indicated by the dotted lines at the top. Underneath, fasten two short hardwood arms by means of hinges, and between them set an iron wheel with flat rim. The axle can be an iron rod with washers on each side of each wood arm, and with pins through the ends to hold it in place. The wheel need not be keyed to the shaft.

To hold this wheel firmly against the ice at all times, connect two stiff coil springs between the lower arm ends and the other plank as shown in the drawings.

Now between the engine drive wheel and this lower wheel run a belt studded with a number of copper harness rivets. These studs provide a positive grip on the ice and insure no slipping.

To make a better connection between the frame and the large wheel mounted on the post, set one cross piece directly over the hub, bore a hole for the top of the rod through its center, then set a large washer over this, fastening it down with nails or screws. This makes a firm bearing and prevents wear.

The sleds used are made by cutting a vinegar barrel in halves, lengthwise. Cut the ends of the hooks a little long, then bend these over and nail down to the edges of the staves to keep the staves and barrel held tightly together. Finally, tie these to the ends of the horizontal arms with ropes from 10 to 25 feet long, depending upon the length of the planks used.

Greater fun can be obtained by running four ridges of wetted snow equidistantly apart, from the center post, outward. Round these off on the tops and smooth down before permitting to freeze.