Modern Mechanix
Issue: May, 1936
Posted in: Computers
No Comments on Robot Bookkeeper Actually Thinks (May, 1936) 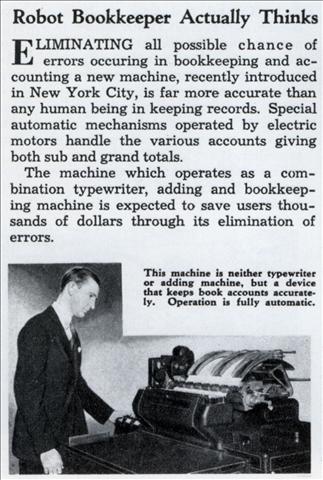 Robot Bookkeeper Actually Thinks
ELIMINATING all possible chance of errors occuring in bookkeeping and accounting a new machine, recently introduced in New York City, is far more accurate than any human being in keeping records. Special automatic mechanisms operated by electric motors handle the various accounts giving both sub and grand totals.
The machine which operates as a combination typewriter, adding and bookkeeping machine is expected to save users thousands of dollars through its elimination of errors.