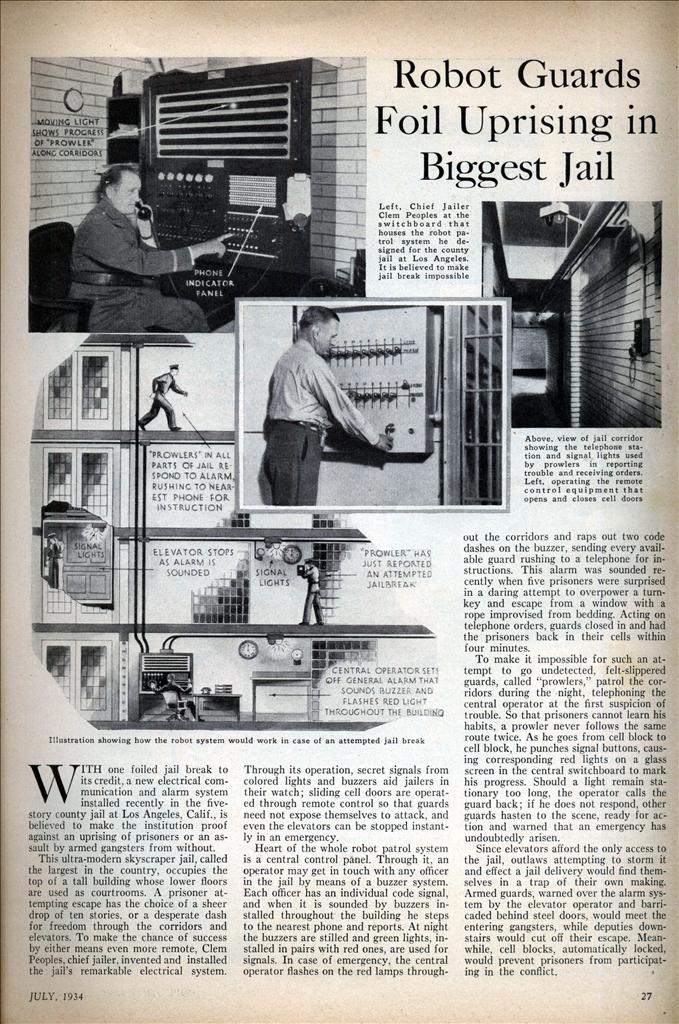 WITH one foiled jail break to its credit, a new electrical communication and alarm system installed recently in the five-story county jail at Los Angeles, Calif., is believed to make the institution proof against an uprising of prisoners or an assault by armed gangsters from without.

This ultra-modern skyscraper jail, called the largest in the country, occupies the top of a tall building whose lower floors are used as courtrooms. A prisoner attempting escape has the choice of a sheer drop of ten stories, or a desperate dash for freedom through the corridors and elevators. To make the chance of success by either means even more remote, Clem Peoples, chief jailer, invented and installed the jail’s remarkable electrical system.

Through its operation, secret signals from colored lights and buzzers aid jailers in their watch; sliding cell doors are operated through remote control so that guards need not expose themselves to attack, and even the elevators can be stopped instantly in an emergency.

Heart of the whole robot patrol system is a central control panel. Through it, an operator may get in touch with any officer in the jail by means of a buzzer system. Each officer has an individual code signal, and when it is sounded by buzzers installed throughout the building he steps to the nearest phone and reports. At night the buzzers are stilled and green lights, installed in pairs with red ones, are used for signals. In case of emergency, the central operator flashes on the red lamps through- out the corridors and raps out two code dashes on the buzzer, sending every available guard rushing to a telephone for instructions. This alarm was sounded recently when five prisoners were surprised in a daring attempt to overpower a turnkey and escape from a window with a rope improvised from bedding. Acting on telephone orders, guards closed in and had the prisoners back in their cells within four minutes.

To make it impossible for such an attempt to go undetected, felt-slippered guards, called “prowlers,” patrol the corridors during the night, telephoning the central operator at the first suspicion of trouble. So that prisoners cannot learn his habits, a prowler never follows the same route twice. As he goes from cell block to cell block, he punches signal buttons, causing corresponding red lights on a glass screen in the central switchboard to mark his progress. Should a light remain stationary too long, the operator calls the guard back; if he does not respond, other guards hasten to the scene, ready for action and warned that an emergency has undoubtedly arisen.

Since elevators afford the only access to the jail, outlaws attempting to storm it and effect a jail delivery would find themselves in a trap of their own making. Armed guards, warned over the alarm system by the elevator operator and barricaded behind steel doors, would meet the entering gangsters, while deputies downstairs would cut off their escape. Meanwhile, cell blocks, automatically locked, would prevent prisoners from participating in the conflict.