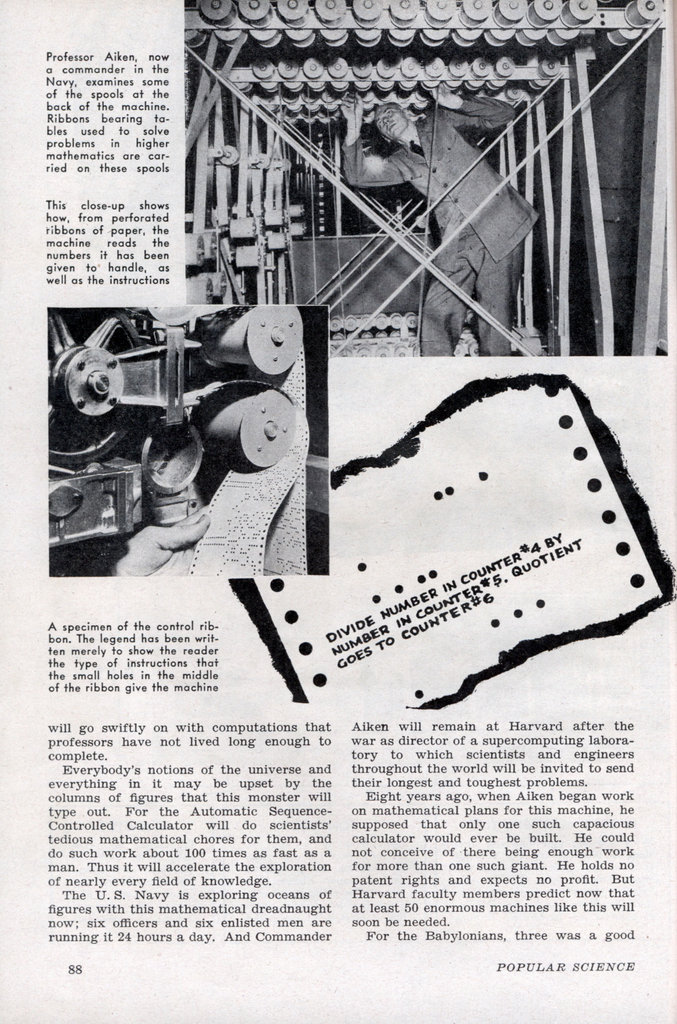 Even Commander Howard H. Aiken, U.S.N.R., the professor in charge of this 35-ton calculating machine, says he does not know what you would call a number that long. It is billions of billions.

But the young man running this figure factory will not need to be a mathematician. If anything goes wrong, a red light will flash, he will make a few simple adjustments, and the mountain of machinery will go swiftly on with computations that professors have not lived long enough to complete.

Everybody’s notions of the universe and everything in it may be upset by the columns of figures that this monster will type out. For the Automatic Sequence-Controlled Calculator will do scientists’ tedious mathematical chores for them, and do such work about 100 times as fast as a man. Thus it will accelerate the exploration of nearly every field of knowledge.

The U. S. Navy is exploring oceans of figures with this mathematical dreadnaught now; six officers and six enlisted men are running it 24 hours a day. And Commander Aiken will remain at Harvard after the war as director of a supercomputing laboratory to which scientists and engineers throughout the world will be invited to send their longest and toughest problems.

Eight years ago, when Aiken began work on mathematical plans for this machine, he supposed that only one such capacious calculator would ever be built. He could not conceive of there being enough work for more than one such giant. He holds no patent rights and expects no profit. But Harvard faculty members predict now that at least 50 enormous machines like this will soon be needed.

For the Babylonians, three was a good enough value for pi now pi has been figured out to 700 decimal places. Many more values used in scientific research and engineering must be ascertained to many more decimal places as the world progresses. The accuracy of weapons, the stability of airplanes, and the reliability of scientific instruments depend largely on mathematical calculations. This machine can determine differences mathematically that are too minute to be measured under any microscope or detected with any other scientific device now available.

Calculators like this can be used to give science periodic mathematical housec leanings. Errors and inadequacies in standard mathematical tables can be detected and corrected. Already, Aiken and his assistants have found 11 major mistakes in a table prepared by a Japanese scholar and published in Germany in 1926. This table has been used in all countries for highly important mechanical and military calculations. At least 200 other such mathematical tables are being used constantly. Dr. Bart Bok of the Harvard Observatory says that in astronomy alone there are enough postwar jobs for Aiken’s robot to keep it grinding away for years. One of the first of these chores may be the compilation of new tables showing the motion of the moon.

Sir Isaac Newton’s theory of gravitation was based largely on comparison of the moon’s movement with that of bodies falling freely on earth. But the moon’s course was charted only roughly; predicting its path involved more than 1,000 arithmetical considerations. The late Prof. E. W. Brown of Yale spent a lifetime working out new and more nearly accurate lunar tables. This machine could have made those computations in about one percent of the time the task took Professor Brown. Now the moon’s motion can be measured with more precision, and the astronomers want still more nearly exact tables.

Another assignment for this portentous, timesaving contrivance may be figuring out the motions of the planets. Some of the most important dynamic equations of the solar system have not been solved yet, simply because there have never been enough mathematicians available. The solution of these and other such equations may affect the theory of relativity and other great scientific concepts.

Calculations made with this machine may tell the experts more about the motions of stars in spiral nebulae, about the oscillating or vibrating stars, about what goes on inside of stars, and about cosmic rays. Difficult problems in physics and chemistry may be solved more rapidly. Calculations that it will make possible may also promote progress in the social sciences, changing our daily lives.

Professor Aiken, indeed, may find it difficult to decide which of the many problems that will be presented to him should be dealt with first. He admits that he cannot compute his own income tax without help. But he would not think of permitting his figure factory to be used for such comparatively simple work. There is no dollar sign on this machine.

There are a half dozen other great mathematical machines in the world, but none of them is as versatile as this one. Some do valid mathematical tricks with cards; others resemble big and very accurate graphs and slide rules. Problems that can be solved as well or better by those machines will be left to them. This Paul Bunyan will stride through forests of figures that might not otherwise be explored for centuriesâ€”if they were ever explored at all.

Commander Aiken modestly ascribes the conception of this device to his own laziness. He is a tall, blond, 42-year-old electrician and scholar. To finish high school, he had to take correspondence courses while employed nights by an Indianapolis power company as a switchboard attendant. This accounts for the construction of the calculator in the form of a switchboard. To complete his thesis for a doctor’s degree at Harvard, he had to make calculations that took him nearly a year. This accounts for his decision to see whether such a machine could not be built.

For two years, he did not mention his breath-taking idea to anyone. He had to convince himself first that it was feasible. Then, in 20 minutes, he interested an International Business Machines Corporation engineer in the idea. Clair D. Lake, a pioneer inventor of mechanisms for I.B.M., was put in charge of work on the plans. Three other I.B.M. experts, Frank E. Hamilton, Benjamin M. Durfee, and James W. Bryce, also became coinventors. It took the company six years and cost more than $250,000 to build the machine. I.B.M. then presented it to Harvard.

This calculator is a generalized or algebraic machine. It does not rely on measurements, but works directly with numbers. Although called a super-brain, it does not really think. It merely obeys a mathematician’s orders, and if he errs, the results are wrong. It enables him, however, to work rapi