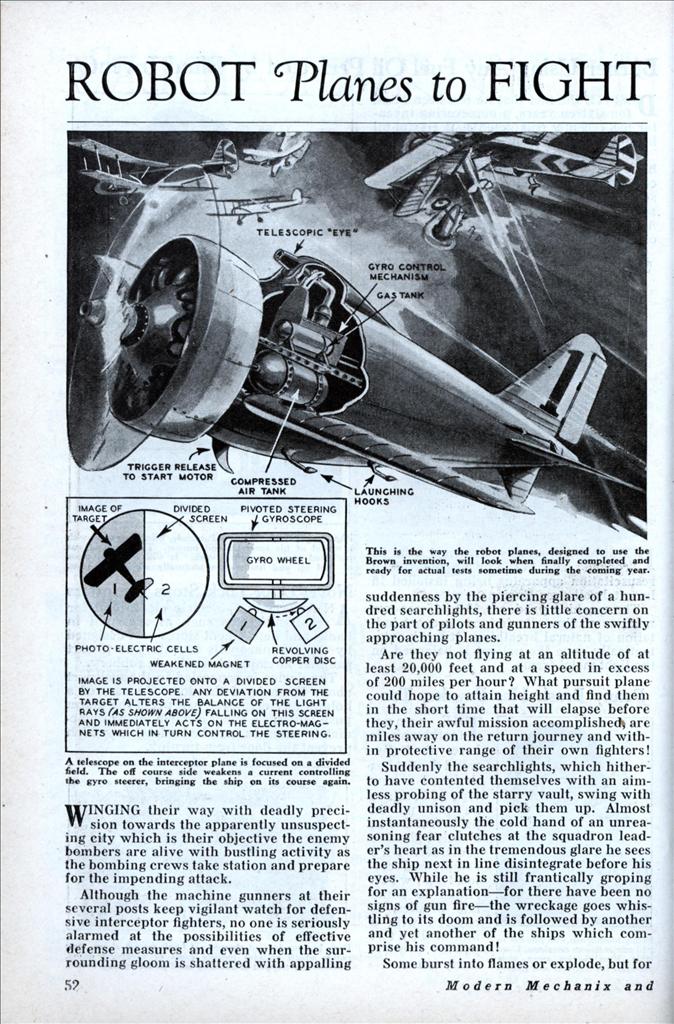 WINGING their way with deadly precision towards the apparently unsuspecting city which is their objective the enemy bombers are alive with bustling activity as the bombing crews take station and prepare for the impending attack.

Although the machine gunners at their several posts keep vigilant watch for defensive interceptor fighters, no one is seriously alarmed at the possibilities of effective defense measures and even when the surrounding gloom is shattered with appalling suddenness by the piercing glare of a hundred searchlights, there is little concern on the part of pilots and gunners of the swiftly approaching planes.

Are they not flying at an altitude of at least 20,000 feet and at a speed in excess of 200 miles per hour? What pursuit plane could hope to attain height and find them in the short time that will elapse before they, their awful mission accomplished! are miles away on the return journey and within protective range of their own fighters!

Suddenly the searchlights, which hitherto have contented themselves with an aimless probing of the starry vault, swing with deadly unison and pick them up. Almost instantaneously the cold hand of an unreasoning fear clutches at the squadron leader’s heart as in the tremendous glare he sees the ship next in line disintegrate before his eyes. While he is still frantically groping for an explanationâ€”for there have been no signs of gun fireâ€”the wreckage goes whistling to its doom and is followed by another and yet another of the ships which comprise his command!

Some burst into flames or explode, but for the greater part the stricken planes appear simply to crumple in the air. The illuminated night is full of falling planes and at this moment the bewildered commander’s fear mounts to sheer terror when his ship staggers under a frightful impact from some unobserved object.

As the few lucky survivors hurriedly retreat from the scene of disaster there is muttered talk about collision in the air but all agree that, even allowing for the blinding glare of the searchlights impinging upon them, it is unthinkable that so many ships would have piled into each other. Yet here is practically an entire squadron destroyed within a few minutes of its objective!

This is the devasting picture painted for the outcome of bombing attacks in the future if Sidney G. Brown, world famous English inventor, develops his latest invention for combating aerial raids.

Realizing how powerless even the most up-to-date ground defenses are in the face of high speed bombing attacks from the air, Mr. Brown proposes to build robot destroyer planes which will bring down or at least incapacitate enemy bombers the moment they are within range of the defense areas.

As this attacking unit, or “destroyer,” carries neither pilot nor armament, and since its entire flight period is a matter of seconds or minutes at the most, Mr. Brown points out that it need consist of little more than a powerful motor and rudimentary wings carrying a minimum of fuel. The steel body containing the steering devices which form part of Mr. Brown’s invention and supporting the control surfaces would be correspondingly small and light. Thus it is perfectly credible that today these “destroyers” can be built to exceed the required attack speed which has been tentatively set at around 450 to 500 miles per hour.

The secret of the steering lies in the use of a telescopic sight which is coupled to photo-electric cells and thence to the gyroscopic controls by means of four electromagnets. Differing from other devices of this nature, the recently suggested control for robot-torpedoes for example, the mechanism is not dependent upon the presence of infrared rays but is controlled by an ingenious arrangement whereby any disturbance of the photo-electric cells is transmitted to the electro-magnets in such a way as to ensure steering at all times in the direction of the sighted target.

Thus when the telescopic sight is aligned on the target the image of the bomber falls on any one or all of the four sections of the photo-cell screen. Should the image deviate from center the balance of the cells is upset and less light will fall on one or more of the cells. Mr. Brown utilizes this simple fact to control the electro-magnets in such a way as to correct any deviation from the target.

In practice these minute but powerful “pursuit ships” would be launched at acute angles from specially designed catapults which would also serve to start the motor of the unit as it left the catapult. Light weight plus great power, assisted by the impulse of the artificial start, are expected to ensure that full speed will be almost instantaneously attained and the “destroyer” thus launched will reach the highest bomber at such speed as to be virtually invisible.

For use against day raiders Mr. Brown proposes that the telescopic sighting “eye” be set on an automatically controlled quadrant and that the destroyers be released at a tangent to the target. The difference in the lines of flight would be gradually taken up as the angle of the telescope is automatically and gradually reduced in flight. Thus the pro- jectile would approach its victim at a fairly normal angle of climb and then attack vertically from beneath.

For use at night in conjunction with searchlights equipped with the latest “electric ears” it would be only necessary to pick up the target and then launch the “destroyer” into the searchlight beam. In this case the telescopic sight would be reversed so as to point backwards into the beam and the projectile would “ride” the light beam to its victim.