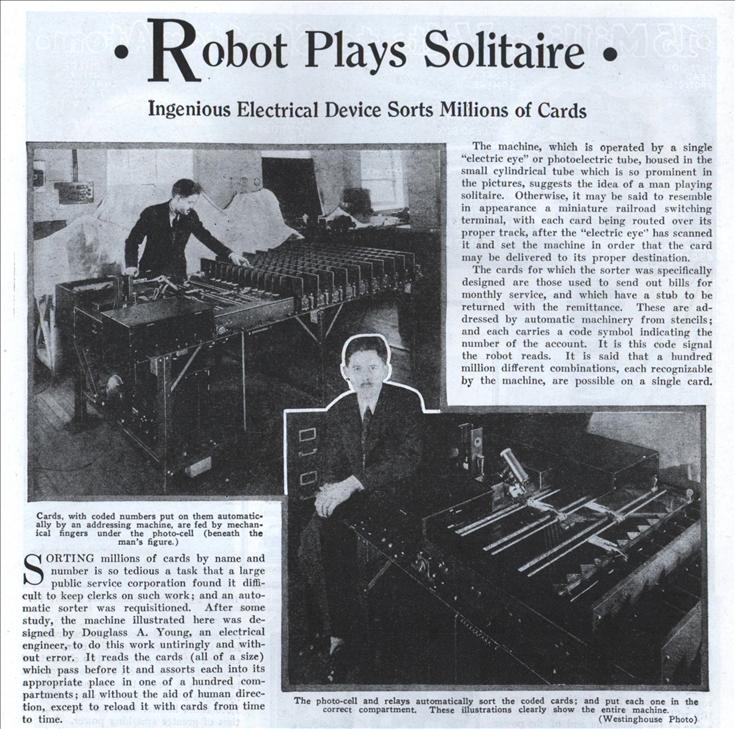 SORTING millions of cards by name and number is so tedious a task that a large public service corporation found it difficult to keep clerks on such work; and an automatic sorter was requisitioned. After some study, the machine illustrated here was designed by Douglass A. Young, an electrical engineer, to do this work untiringly and without error. It reads the cards (all of a size) which pass before it and assorts each into its appropriate place in one of a hundred compartments; all without the aid of human direction, except to reload it with cards from time to time.

The machine, which is operated by a single “electric eye” or photoelectric tube, housed in the small cylindrical tube which is so prominent in the pictures, suggests the idea of a man playing solitaire. Otherwise, it may be said to resemble in appearance a miniature railroad switching terminal, with each card being routed over its proper track, after the “electric eye” has scanned it and set the machine in order that the card may be delivered to its proper destination.

The cards for which the sorter was specifically designed are those used to send out bills for monthly service, and which have a stub to be returned with the remittance. These are addressed by automatic machinery from stencils; and each carries a code symbol indicating the number of the account. It is this code signal the robot reads. It is said that a hundred million different combinations, each recognizable by the machine, are possible on a single card.