Mechanix Illustrated
Issue: Apr, 1948
Posted in: How to, Radio
Tags: how its made
3 Comments on Robot Production Line Makes 3 Radios a Minute (Apr, 1948) 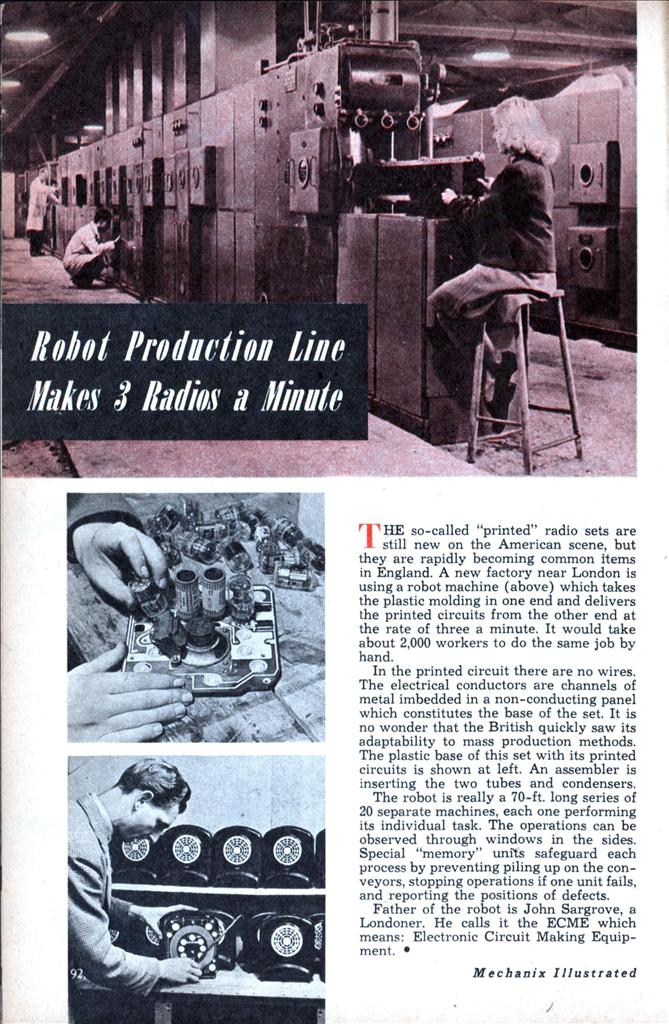 THE so-called “printed” radio sets are still new on the American scene, but they are rapidly becoming common items in England. A new factory near London is using a robot machine (above) which takes the plastic molding in one end and delivers the printed circuits from the other end at the rate of three a minute. It would take about 2,000 workers to do the same job by hand.

In the printed circuit there are no wires. The electrical conductors are channels of metal imbedded in a non-conducting panel which constitutes the base of the set. It is no wonder that the British quickly saw its adaptability to mass production methods. The plastic base of this set with its printed circuits is shown at left. An assembler is inserting the two tubes and condensers.

The robot is really a 70-ft. long series of 20 separate machines, each one performing its individual task. The operations can be observed through windows in the sides. Special “memory” units safeguard each process by preventing piling up on the conveyors, stopping operations if one unit fails, and reporting the positions of defects.

Father of the robot is John Sargrove, a Londoner. He calls it the ECME which means: Electronic Circuit Making Equipment.