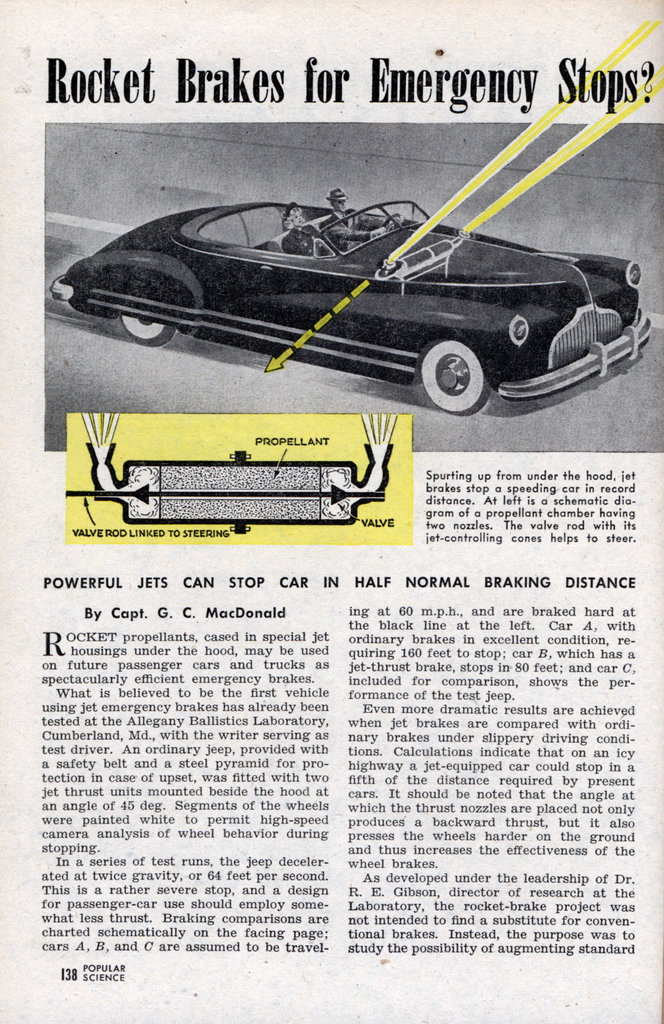 POWERFUL JETS CAN STOP CAR IN HALF NORMAL BRAKING DISTANCE

ROCKET propellants, cased in special jet housings under the hood, may be used on future passenger cars and trucks as spectacularly efficient emergency brakes.

What is believed to be the first vehicle using jet emergency brakes has already been tested at the Allegany Ballistics Laboratory, Cumberland, Md., with the writer serving as test driver. An ordinary jeep, provided with a safety belt and a steel pyramid for protection in case of upset, was fitted with two jet thrust units mounted beside the hood at an angle of 45 deg. Segments of the wheels were painted white to permit high-speed camera analysis of wheel behavior during stopping.

In a series of test runs, the jeep decelerated at twice gravity, or 64 feet per second. This is a rather severe stop, and a design for passenger-car use should employ somewhat less thrust. Braking comparisons are charted schematically on the facing page; cars A, B, and C are assumed to be traveling at 60 m.p.h., and are braked hard at the black line at the left. Car A, with ordinary brakes in excellent condition, requiring 160 feet to stop; car B, which has a jet-thrust brake, stops in 80 feet; and car C, included for comparison, shows the performance of the test jeep.

Even more dramatic results are achieved when jet brakes are compared with ordinary brakes under slippery driving conditions. Calculations indicate that on an icy highway a jet-equipped car could stop in a fifth of the distance required by present cars. It should be noted that the angle at which the thrust nozzles are placed not only produces a backward thrust, but it also presses the wheels harder on the ground and thus increases the effectiveness of the wheel brakes.

As developed under the leadership of Dr. R. E. Gibson, director of research at the Laboratory, the rocket-brake project was not intended to find a substitute for conventional brakes. Instead, the purpose was to study the possibility of augmenting standard brakes in emergency situations, and to provide protection on icy surfaces and in the event of brake failure. Replacement of the propellant, which is entirely consumed in one application, may cost between $10 and $25; but it should be pointed out that even a minor collision involving a smashed-in radiator grille and front fender can very readily involve far greater expense, even assuming no one is injured. Considering the consequences of a mountainside runaway of a trailer truck, caused perhaps by a ruptured air line, the cost of even the large propellant charge necessary is a bargain in disaster insurance.

The installation used in these tests was much bulkier than what is contemplated for possible commercial use. A single propellant chamber, mounted crosswise at the rear of the engine compartment, is a more likely design. The jets would pass through the hood via a pair of “blow-out plates.” A sliding valve rod, linked to the steering gear, would provide a means of steering the car during the stop. If for instance the wheels are swung to the right, the rod would move to the left, cutting down the left jet. This feature is especially desirable since locked front wheels won’t steer effectively, a fact that now contributes to many accidents on icy roads and when curves are entered at excessive speed. Electrical firing of the rockets would probably be used, triggered by extreme pressure or extreme travel of the brake pedal.

Certain disadvantages must be recognized. The propellant offers an additional hazard in case of an automobile fire. However, a fusible plug melting at a low temperature would protect the’ chamber from bursting, though it would not prevent the propellant from burning with about the same effect as several gallons of gasoline. In the event of a collision that both upset the car and fired the rockets, a zone of 10 feet or so in front of each nozzle would be dangerous, due to the high temperature and velocity of the jet gases. If the car remained upright, the jets would blow off harmlessly. Accidental firing of the rockets when the car is either motionless or moving slowly might be risky. This could be eliminated with a centrifugal switch that would only cut in the firing circuit at a predetermined minimum speed.