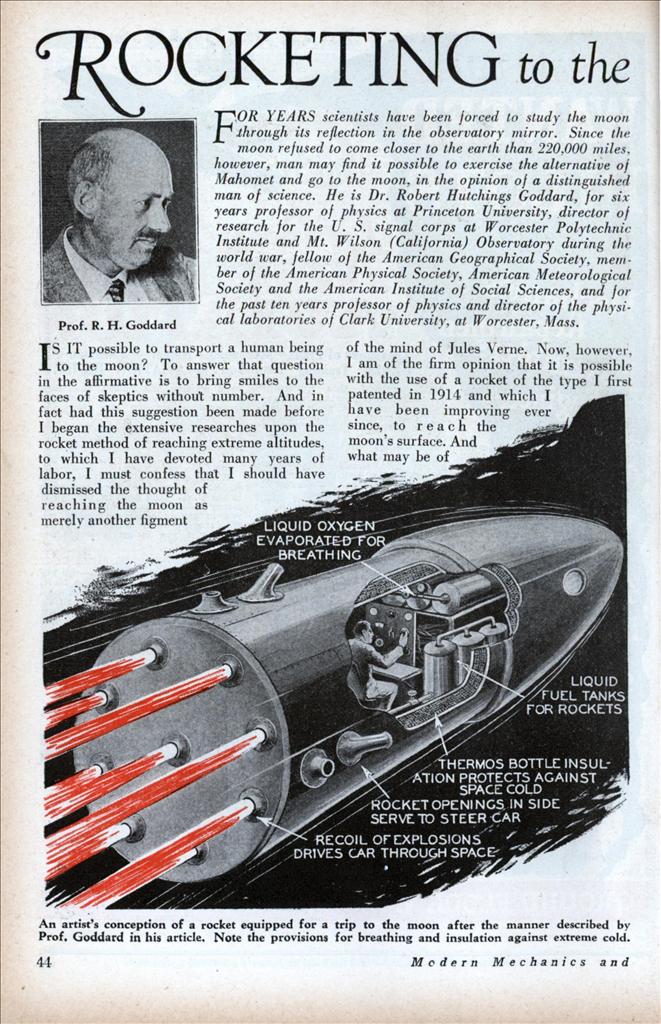 ROCKETING to the Moon

FOR YEARS scientists have been forced to study the moon through its reflection in the observatory mirror. Since the moon refused to come closer to the earth than 220,000 miles, however, man may find it possible to exercise the alternative of Mahomet and go to the moon, in the opinion of a distinguished man of science. He is Dr. Robert Hutchings Goddard, for six years professor of physics at Princeton University, director of research for the V. S. signal corps at Worcester Polytechnic Institute and Mt. Wilson (California) Observatory during the world war, fellow of the American Geographical Society, member of the American Physical Society, American Meteorological Society and the American Institute of Social Sciences, and for the past ten years professor of physics and director of the physical laboratories of Clark University, at Worcester. Mass.

IS IT possible to transport a human being to the moon? To answer that question in the affirmative is to bring smiles to the faces of skeptics without number. And in fact had this suggestion been made before I began the extensive researches upon the rocket method of reaching extreme altitudes, to which I have devoted many years of labor, I must confess that I should have dismissed the thought of reaching the moon as merely another figment of the mind of Jules Verne. Now, however, I am of the firm opinion that it is possible with the use of a rocket of the type I first patented in 1914 and which I have been improving ever since, to reach the moon’s surface. And what may be of particular interest to anyone who might contemplate making a journey thither in this new form of conveyance, I believe it would be possible for him to return to the earth in safety and report to the world the results of the first journey to one of our celestial neighbors.

Contrary to popular impression, I am not at present engaged in an attempt to perfect a rocket which will carry a human being to the moon. That will come later, but it should be understood that what I am now developing is a comparatively small affair and is not intended for reaching heights much greater than just outside the atmospheric envelope of the earth. There are two reasons for this: First, the expense and time for the development are much reduced if the work is carried out on a small scale.

Although I have been engaged in rocket work since 1914 when I was granted my first patents, the public evinced no particular curiosity regarding the possibilities my investigations might open up and the recent interest displayed came in the nature of a surprise.

At this moment I am engaged in the highly important problem of stabilization, and feel that it would be premature to give out data upon the results before this matter has been settled, and the work may be called complete. Nevertheless, the tests I have made, including that of July 17th when my experimental rocket was fired several thousand feet, have demonstrated clearly that the method of propelling it is operative and practical.

This new method involves the use of liquid propellants and makes possible a rocket with most of its weight consisting of propellant material of high energy value. This is the new feature. And it is one that is quite vital if a rocket is to be used for reaching extreme heights. Although all of the basic principles involved in the high altitude rockets were patented by me in 1914, a few of the ideas I advanced at that time have been used abroad but only with black powder rockets.

The liquid propellant I am using is as far ahead of black powder as the automobile is ahead of the horse and buggy. Yet with the use of three black powder rockets, Fritz von Opel, a German, recently succeeded in launching an airplane 75 feet in the air and circling half of a German airport at a high speed before he lost control of the machine.

But the rockets I have been testing for the past nine years, are, so far as I know, the only ones actually constructed that have embodied any considerable number of my original principles.

The first use of the rocket will be to send up instruments which will permit the study of the atmosphere at great heights. Another practical step beyond that, in all probability, will be to send a camera round, and close to, the moon, having it guided throughout the journey by photo electric cells. With the knowledge thus obtained, a trip to the moon may well be planned.

The idea of such a history-making trip appeals most vividly to the imagination and is one to which I have given consider able study.

To the layman, undoubtedly the first thought is: “Who is going to make that first solo flight into the unknown?”

Much risk is to be involved, undoubtedly, but not nearly so much as would seem at first blush were I free to make public the result of my investigations to date. When the time comes to attempt a flight into space the dangers ahead will be proportionately less grave in the light of scientific knowledge than those which seemed apparent when Columbus started west with his caravels over the uncharted seas only to find that the troubles predicted for him were largely imaginary.

And many with the hardihood and the scientific knowledge necessary for this, the most thrilling of all adventures in human experience, will be willing and eager to shove off into the vast unknown.

The great rocket, with a compartment large enough to hold a passenger comfortably with all of the equipment necessary for his task, will not need to carry propellants for the return trip. The chemical elements necessary for refueling exist on the moon to the most careful astronomical observations, and it will be possible for the passenger to take off without any outside assistance for the return journey.

That of itself removes one of the greatest difficulties by restricting the weight of the space cruiser. Successive explosions are necessary to propel the rocket and the speed will be governed according to their frequency. This may be regulated automatically or by the passenger himself, from a control board within his cabin.

“Is it possible to acquire the amazing speed necessary for the purpose in mind?” has been asked.

To answer that I will point to the experiment I made last summer with the rocket I am shown holding in my hand in the accompanying photograph.

That is more than 90 miles per minute— enough to send the gases away from the moon forever if fired straight up from her surface. The earth, however, has four times the gravitation force of the moon, and the velocity of the rocket launched into space from our world will have to be four times that great, or 360 miles a minute. That speed may be easily attained by a larger rocket. And thus it can be readily seen that the time required to leave the earth and penetrate into space will be brief indeed.

But how will it be possible for one to live inside this projectile?

First, I have demonstrated that the rocket can be started without a jar sufficient to endanger life within it. Neither need there be any when the rocket lands. For it will be so equipped that it may be guided to earth as easily and safely as an airplane.

Of course, the passenger must breathe. The simplest plan of supplying oxygen is by evaporating a supply of liquid oxygen carried along. The cold of space would make the transportation of liquid oxygen a comparatively easy matter. Insulation from the cold of space would be by the ordinary “thermos bottle” principle which we know works well down to a temperature nearly that of outer space.

The danger developing from friction would be nil, as no noticeable heat would be generated because the speed through the dense part of the atmosphere would not exceed 2,000 feet per second and the great increase in speed necessary to leave the earth would occur from 20 to 700 miles above terra firma.

According to my calculations, the trip to the moon can be made in 48 hours or an average speed of 4,750 m.p.h., an astonishing rate when compared with the swiftest methods of present-day transportation.