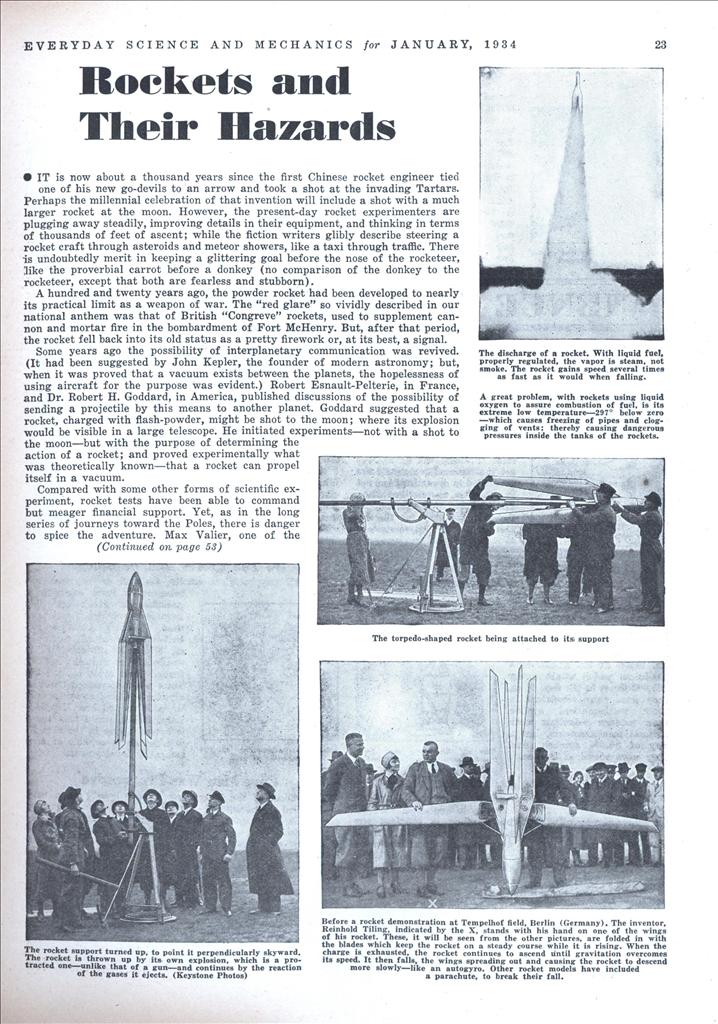 IT is now about a thousand years since the first Chinese rocket engineer tied one of his new go-devils to an arrow and took a shot at the invading Tartars. Perhaps the millennial celebration of that invention will include a shot with a much larger rocket at the moon. However, the present-day rocket experimenters are plugging away steadily, improving details in their equipment, and thinking in terms of thousands of feet of ascent; while the fiction writers glibly describe steering a rocket craft through asteroids and meteor showers, like a taxi through traffic. There is undoubtedly merit in keeping a glittering goal before the nose of the rocketeer, Hike the proverbial carrot before a donkey (no comparison of the donkey to the rocketeer, except that both are fearless and stubborn).

A hundred and twenty years ago, the powder rocket had been developed to nearly its practical limit as a weapon of war. The “red glare” so vividly described in our national anthem was that of British “Congreve” rockets, used to supplement cannon and mortar fire in the bombardment of Fort McHenry. But, after that period, the rocket fell back into its old status as a pretty firework or, at its best, a signal.

Some years ago the possibility of interplanetary communication was revived. (It had been suggested by John Kepler, the founder of modern astronomy; but, when it was proved that a vacuum exists between the planets, the hopelessness of using aircraft for the purpose was evident.) Robert Esnault-Pelterie, in France, and Dr. Robert H. Goddard, in America, published discussions of the possibility of sending a projectile by this means to another planet. Goddard suggested that a rocket, charged with flash-powder, might be shot to the moon; where its explosion would be visible in a large telescope. He initiated experiments—not with a shot to the moon—but with the purpose of determining the action of a rocket; and proved experimentally what was theoretically known—that a rocket can propel itself in a vacuum.

Compared with some other forms of scientific experiment, rocket tests have been able to command but meager financial support. Yet, as in the long series of journeys toward the Poles, there is danger to spice the adventure. Max Valier, one of the pioneers of rocket development, was killed by the explosion of a tank of liquid oxygen; and, a few days ago, Reinhold Tiling, whose spectacular experiments had shown considerable success, met with a similar fate, together with two of his assistants. The rocket is still an uncontrollable device; and its explosive tendencies must be well regulated before it is a means of transportation. Yet this cannot be regarded as impossible.

The liquid-fuel rocket is the evident solution of the problem. Powder contains too little energy. The burden which rests upon the rocket, as on no other motor, is to carry its own oxygen, instead of drawing it from the air. And oxygen is from three-quarters to eight-ninths of the fuel load. It is a gas, which becomes a liquid only at about 300 degrees below zero, Fahrenheit; and that liquid generates a pressure which is tremendous as soon as it warms up a few degrees above that point. Yet the motor of the rocket must generate a heat of several thousand degrees, a short distance from the oxygen tank. In a rocket as big as a ship, this will not be true; but in a model rocket, it is one of the big problems. Several rockets, like that sent up last spring by the American Interplanetary Society at Staten Island, New York, have exploded in the air; and a loaded rocket is viewed by its operators with the caution, due a bomb whose fuse is lighted.

Yet the rocket experiments go on. There has never been any scientific problem so dangerous that no experimenters would tackle it.