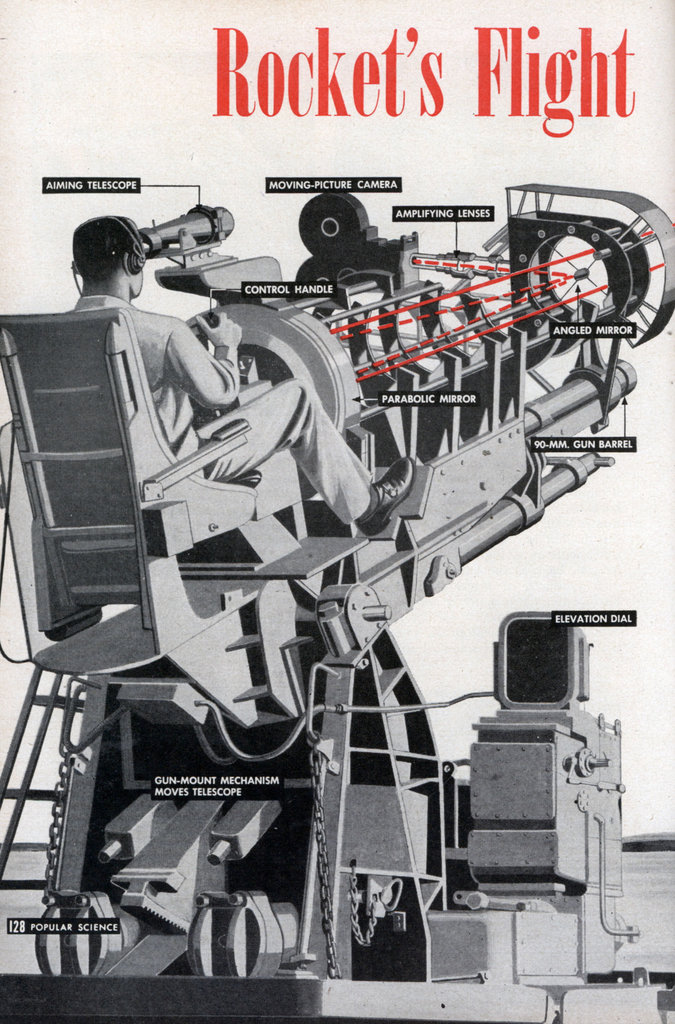 Gun-mounted camera eye keeps movie record of V-2 missile as it speeds into space at 3,500 miles an hour.

POPEYE is a seeing machine. Popeye can see things yon can’t see. His big glass eye can follow a V-2 zooming 3,500 m.p.h, and tell you just what it does at the 100-mile peak of its flight. But even Popeye is no match for enemy guided missilesâ€”he could not spot an attacking rocket soon enough to sound the alarm.

Popeyeâ€”as this Rube Goldbergish invention is unofficially knownâ€”is a 16-inch-wide parabolic mirror, amplifying lenses, and a movie camera, all mounted on top of a sawed-off 90-mm. antiaircraft gun so that it can follow the fast-moving rockets. Despite its fantastic appearance, Popeye has a serious purpose: to find out what happens to high-altitude rockets after they are fired. It will be used on all kinds of rocketsâ€”the new ones made in USA as well as the V-2.

Like Popeye, they are all trying to find out, for every vital second of a rocket’s meteoric flight, where the missile is, when it’s there, and what it’s doing there. These devices are not designed to spot attacking missiles, although one researcher suggests that a big telescope might be fitted with a heat detector (a bolometer or thermocouple) instead of a camera and be used to locate incoming missiles by the heat from their rocket jets.

Astronomers already use such a system to track stars automatically. It would work fine as long as the missile approached along a straight line of sight from high altitudes. But no telescope can see through the earth. An attacking missile might come in to the target at a low level, hidden by the horizon until the last 50 miles or so. At 3,500 m.p.h, a rocket covers those 50 miles in less than one minute!

But the array of observing instruments at White Sands will provide the basic facts needed to make better rockets. They will also benefit other branches of science, for the data gathered should reveal much about the temperature, density, and similar characteristics of air in the mysterious region 100 miles or more above the earth. All these things must be known before men can fly there.

One reason we don’t have space ships yet is that we don’t know how a speeding rocket twists and turns and tilts. If the scientists knew, they might be able to design better controls that would keep the rocket straight. Popeye will tell. Its camera snaps a picture of the rocket 16 times every second. After the flight, experts project each picture on a screen, and measure how much the rocket moves around between consecutive photographs.

The camera also records dials that show time and the angles of elevation and azimuth. The time dial is governed by the ultraprecise “ticks” of a vibrating crystal in a clock located in the control trailer. As a further check on time, radio signals sent every second from the launching site operate a neon glow lamp in the field of view of the camera, making a dark “pip” on the edge of the negative. From all this information on the film, technicians can calculate the speed and path, or trajectory, of the rocket. Explosions and the operation of parachutes and other special equipment also show up on the film.

The telescope itself is similar to those used by astronomers. A 16-inch parabolic mirror gathers light and focuses it on an angled mirror that reflects it to one side toward the camera. Before reaching the film, the image is further enlarged by a set of amplifying lenses that can be adjusted to give an effective focal length as great as 80 feet. The recording cameras are standard Mitchells or Akeleys, like those used in Hollywood studio and newsreel work, modified for their rocket-photographing job.

Popeye watches the rocket flights from an 8,000-foot mountaintop 40 miles away from the launching area. If the telescope were much closer, the technician who “aims it would not be able to move fast enough to follow speeding V-2s as they take off. The high-altitude location also has another advantage, since it eliminates much of the shimmering caused by the normal movement of the air near the ground. This shimmeringâ€”the same thing that causes mirages in a desertâ€”is the reason stars twinkle when seen with the naked eye. As there is less of this effect in the rarefied air atop high mountains, such locations are favored for big telescopes.

Even more accurate than Popeye at tracking the path of a rocket is “dovap,” a radio tracking system also developed by Army Ordnance’s research laboratories at Aberdeen Proving Ground, Md. It uses the Dop-pler effect, the change in the frequency of a radio wave caused by movement of the transmitter or receiver. The faster the transmitter moves, the more the frequency changes.

This same thing happens to all kinds of wavesâ€”light and sound as well as radio. The wailing sound of a passing train’s whistle, for instance, is caused by the Doppler effect. The frequency (pitch) of the Sound from the whistle goes up as the train approaches and down after it has passed. In this case the whistle is the moving transmitter and your ear the stationary receiver. Records of frequency changes give a measure of the speed of the transmitter.

The dovap equipment used at White Sands sends a steady radio signal to a combination transmitter-receiver located just behind the war head of the V-2. This transceiver picks up the signal, amplifies it, and sends it back to a ground receiver. The ground receiver compares the signal from the rocket with the original signal sent out from the ground transmitter. The difference between the two signals, called the Doppler frequency, is recorded on automatic instruments.

Each cycle per second of Doppler frequency received means the V-2 has moved in that second half a wave length farther away from the ground station, or about 6.25 feet in the case of dovap’s 77,000 kilocycle signal (it becomes a bit more complicated when the ground receiver is separated some distance from the ground transmitter, as it is at White Sands). Thus, if the Doppler frequency is 800 cycles per second, the V-2 must be moving 6.25 x 800, or 5,000 feet per second.

A complete record of the Doppler frequency spots the position of the rocket within a few feet and measures its velocity within three-tenths of a foot per second. This information is fed into Aberdeen’s “Eniac” computer (PSM, Apr. ’46, p. 83), which turns out in seven minutes 2,500 numbers indicating more than 800 positions along the path followed by the V-2 (ordinary computing methods would require several weeks of work for the same job).

Other instruments in the battery of observing devices at White Sands measure the same things in different ways. Many types of radar sets follow the flashing rockets. Some have telescopes attached for final, precision adjustment of the aim of the beam. Others are held on their target by a small beacon transmitter in the rocket itself, so that the radar receivers get a strong signal. Phototheodolites, which are essentially movie cameras with big telephoto lenses and accurate direction indicators, furnish the same sort of record as the big telescope, but can follow the rockets only about 50 miles.

Other instruments already in use at White Sands include special cameras and several telescopes smaller than Popeye. And Ordnance researchers are already planning another new telescope, still bigger than Pop-eye, to follow new rockets that will far outdistance the V-2.