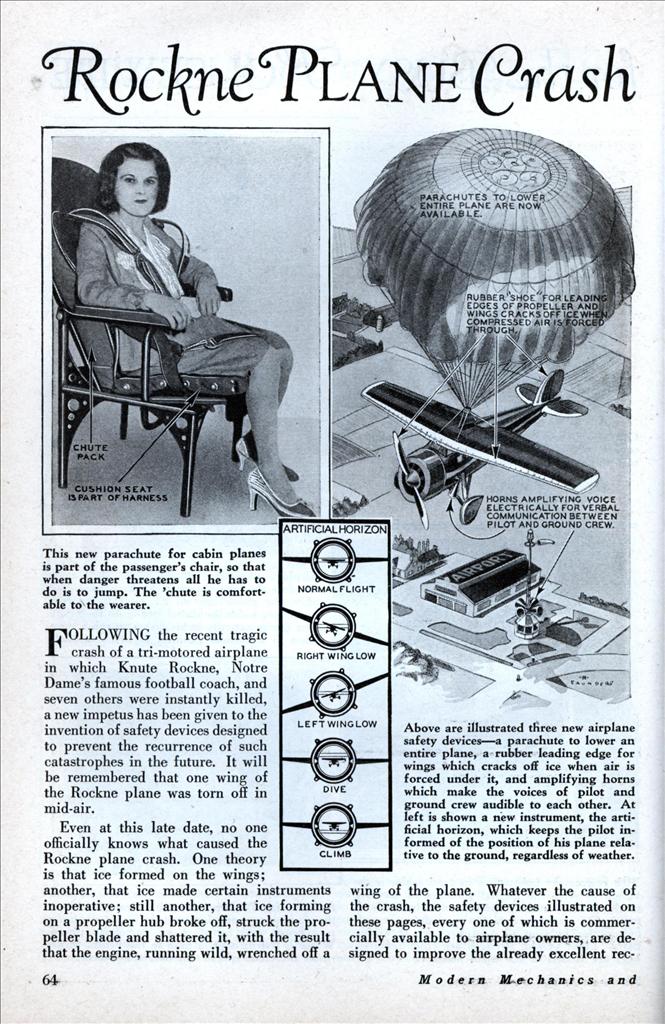 FOLLOWING the recent tragic crash of a tri-motored airplane in which Knute Rockne, Notre Dame’s famous football coach, and seven others were instantly killed, a new impetus has been given to the invention of safety devices designed to prevent the recurrence of such catastrophes in the future. It will be remembered that one wing of the Rockne plane was torn off in mid-air.

Even at this late date, no one officially knows what caused the Rockne plane crash. One theory is that ice formed on the wings; another, that ice made certain instruments inoperative; still another, that ice forming on a propeller hub broke off, struck the propeller blade and shattered it, with the result that the engine, running wild, wrenched off a wing of the plane. Whatever the cause of the crash, the safety devices illustrated on these pages, every one of which is commercially available to airplane owners, are designed to improve the already excellent record of flying from a safety standpoint.
Huge parachutes, large enough to lower an entire plane to the ground, are now for sale by at least one manufacturer. The Rockne plane was flying at a height of some 500 feet when it lost its wing. A plane parachute, released at this height, would have been adequate to lower the ship in safety.

Two methods of doing away with the danger of ice forming on the wings are now available. One, manufactured by the Goodrich rubber company, consists of a thin rubber “glove” placed over the leading edge of wings and tail surfaces, and even of propellers. Underneath this rubber sheet is placed a length of flexible tubing through which air can be forced under pressure. This causes the tubing to expand, moving the rubber glove to such an extent that any ice formed on it is immediately cracked off. Actual tests have proved this device workable.

A second way of fighting ice is illustrated on this page. It is the invention of Archie F. Thompson, and consists of an asbestos base, curved to fit the leading edge of the wing, to which is fastened heating coils of the type used in an electric toaster. Over the coils is placed a surface plate of aluminum alloy. Electric current supplied by a wind-driven generator mounted alongside the fuselage heats the resistance wires and melts any ice which may have formed on the aluminum surface plate.

Super-power horns which amplify the voice to such a degree that verbal communication can be established between an airplane and a ground crew are now available. In case of fog or other emergencies, the value of such equipment is obvious.

One disadvantage of personal parachutes on a cabin plane is that the time required to secure a chute, fasten it, and jump, is likely to be so great that the ship will have crashed before the passenger leaves the cabin. A new type airplane seat in which is incorporated a parachute was introduced at the recent Detroit air show. The passenger sits comfortably on the ‘chute pack, and in case of danger has his safety device already attached so all he has to do is jump.