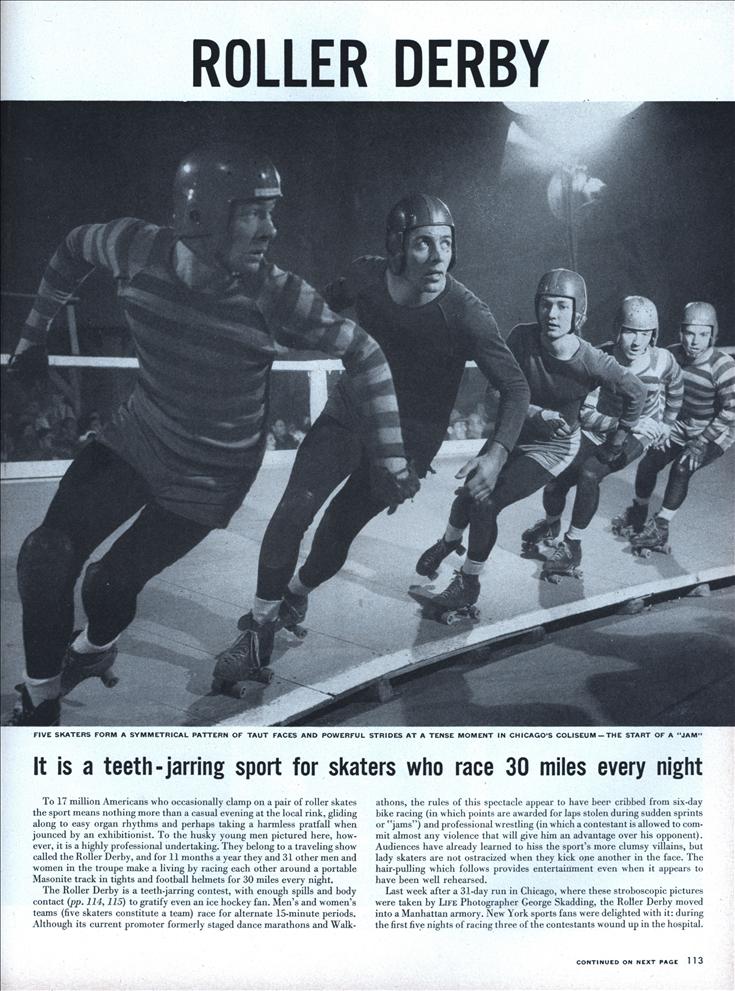 To 17 million Americans who occasionally clamp on a pair of roller skates the sport means nothing more than a casual evening at the local rink, gliding along to easy organ rhythms and perhaps taking a harmless pratfall when jounced by an exhibitionist. To the husky young men pictured here, however, it is a highly professional undertaking. They belong to a traveling show called the Roller Derby, and for 11 months a year they and 31 other men and women in the troupe make a living by racing each other around a portable Masonite track in tights and football helmets for 30 miles every night.

The Roller Derby is a teeth-jarring contest, with enough spills and body contact (pp. 114,115) to gratify even an ice hockey fan. Men’s and women’s teams (five skaters constitute a team) race for alternate 15-minute periods. Although its current promoter formerly staged dance marathons and Walk- athons, the rules of this spectacle appear to have beer cribbed from six-day bike racing (in which points are awarded for laps stolen during sudden sprints or “jams”) and professional wrestling (in which a contestant is allowed to commit almost any violence that will give him an advantage over his opponent). Audiences have already learned to hiss the sport’s more clumsy villains, but lady skaters are not ostracized when they kick one another in the face. The hair-pulling which follows provides entertainment even when it appears to have been well rehearsed.

Last week after a 31-day run in Chicago, where these stroboscopic pictures were taken by Life Photographer George Skadding, the Roller Derby moved into a Manhattan armory. New York sports fans were delighted with it: during the first five nights of racing three of the contestants wound up in the hospital.