Popular Mechanics
Issue: May, 1936
Posted in: Automotive
Tags: trailers
No Comments on Rolling around America (May, 1936) 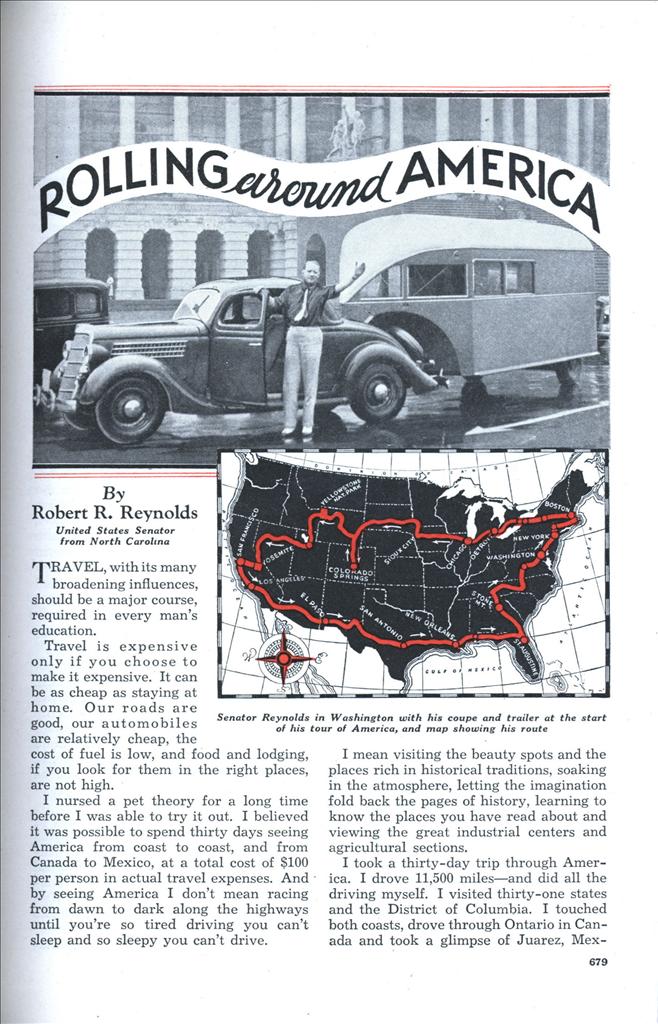 TRAVEL, with its many broadening influences, should be a major course, required in every man’s education.

Travel is expensive only if you choose to make it expensive. It can be as cheap as staying at home. Our roads are good, our automobiles are relatively cheap, the cost of fuel is low, and food and lodging, if you look for them in the right places, are not high.

I nursed a pet theory for a long time before I was able to try it out. I believed it was possible to spend thirty days seeing America from coast to coast, and from Canada to Mexico, at a total cost of $100 per person in actual travel expenses. And by seeing America I don’t mean racing from dawn to dark along the highways until you’re so tired driving you can’t sleep and so sleepy you can’t drive.

I mean visiting the beauty spots and the places rich in historical traditions, soaking in the atmosphere, letting the imagination fold back the pages of history, learning to know the places you have read about and viewing the great industrial centers and agricultural sections.

I took a thirty-day trip through America. I drove 11,500 miles—and did all the driving myself. I visited thirty-one states and the District of Columbia. I touched both coasts, drove through Ontario in Canada and took a glimpse of Juarez, Mexico, passed through three national parks, visited fourteen state capitols, stopped briefly in some 500 American cities and towns—and I did it all for less than $400.

If four young men followed my plan and something of my schedule, they could do the same thing for $100 each and have enough left for an inexpensive present for the folks back home and an occasional movie en route.

Here’s how I did it. I got a trailer, equipped with a combination living room and sleeping quarters for two—berths that made up something like those in a Pullman. There was a folding table, an alcove for a portable typewriter, one for a small library, a radio and reclining chairs, a kitchenette, equipped with a small gasoline stove, a sink, hot and cold running water, a wardrobe for clothes, a compartment for shoes and linen, one for cooking utensils and dishes, one for groceries and an icebox. There was also a shower bath and a telephone connection between the trailer and the power car in front, and electric lights.

This trailer was hitched to the back of a small coupe. I started from Washington and returned thirty days later with more sights and memories and new facts and new friends than I ever in all my life packed into thirty days. And while I did all the driving because my companion did not know how, I got back feeling better than when I started. I saw more than many people see in a lifetime. And I traveled almost as cheaply and just as comfortably as I ever traveled before.

Perhaps you say I was able to do this because I had a trailer and not many people have one. Mine was unusually fine, but all trailers do not have to be equipped with electric lights and running water. Any ingenious boy, with the help of a mechanic, can build a good enough trailer to carry pup-tents, cooking utensils and the equipment he needs. Or they can be bought for prices starting remarkably low.

Here are some of the things we saw in thirty days. We started from Washington and drove to the Naval Academy at Annapolis, and made stops to view historical points in Baltimore, Wilmington, Philadelphia, Trenton, New York City, West Point, Plymouth, Boston, Albany, Buffalo and Niagara Falls.

At Niagara Falls, we crossed the International bridge into Canada and traveled 300 miles across Ontario to Detroit where we visited an automobile factory and saw what no American should miss—Henry Ford’s Greenfield Village and Museum which brings places of interest for you to see instead of making you go thousands of miles to see them.

In Chicago we visited the packing plants, then went through Iowa and into the Black Hills and the Bad Lands of South Dakota. Then came Lead, S. D., home of the largest gold producing mine in the world, and Rushmore National Park, where Gutzon Borglum, the sculptor, is carving giant likenesses of Washington, Jefferson, Lincoln and Theodore Roosevelt from the solid granite of a mountain top.

We spent an exciting night here when we encountered a steep grade without an opportunity to gain momentum. We crept almost to the top when the engine, boiling over, went dead. We were stalled on a steep mountain road at night with a precipice on one side and a towering cliff on the other. We worked for two hours trying to nurse our load up that hill, but we couldn’t make more than a foot at a time between “breathing spells” of the motor. Finally we went to sleep in the woods beside the road, afraid to sleep in our comfortable bunks in the trailer. It was daylight when we awoke, with a car stopped on the road and a man standing over us. He- was Mr. Borglum’s son.

“Brother,” I said, “your father got us into this mess. I drove thousands of miles to get here and see his work. So you have to get us out.”

And he did. He hitched us on behind with a tow rope and took us clear to the top of the mountain. If you are really in trouble on the road, you’ll always find a friend to help.

We visited Wyoming state park; then Cheyenne, Denver, Colorado Springs, Pikes Peak, the Garden of the Gods, and Cody, Wyo., home of the Buffalo Bill Museum, then crossed the Yellowstone National Park, and turned southward through Montana and down to Salt Lake City. We visited Reno and the capitol at Carson City. We drove through the Yosemite National Park—then continued westward to San Francisco. We spent several days in southern California, took a peek at the movie industry, then drove eastward to the petrified forest of Arizona, stopped at the famous Carlsbad Caverns, then dropped into Texas and across into old Mexico at El Paso. Then to San Antonio and the Alamo Mission. From Houston and Beaumont, we drove to Baton Rouge, then to New Orleans, then across Alabama and Florida to St. Augustine, and up to Atlanta. Tennessee followed with stops at Chattanooga and Knoxville and then toward North Carolina and Tennessee’s Great Smoky Mountain National Park. Then came historic King’s Mountain, Charlotte, and on into Virginia, over the Natural Bridge, through the Shenandoah valley and its hundreds of crystal caverns to Charlottesville, and the famous homes and shrines of Jefferson, Monroe and Madison. From these historic places we drove to Fredericksburg, then back to Washington.

During this trip of thirty days we slept in the trailer at night and parked it wherever we wished, cooked our supper which usually consisted of a big steak, light bread and milk, and got to sleep early. Breakfast consisted of nothing but fruit and a steaming cup of black coffee. Then we started driving just about dawn. I found the best time for driving was between dawn and ten o’clock in the morning. Sometimes, we drove at night. We covered an average of about 375 miles daily, depending on where we wanted to stop and what we wanted to see.

I found many people had never seen a United States senator and they usually expressed surprise at seeing one dressed in overalls and unshaven. At Sioux Falls, S. D., I parked the car and was walking along the street when a nice looking fellow came along. I accosted him, intending to ask where the telegraph office was.

Without pausing he said: “Sorry, I haven’t got a dime” and increased his pace.

There were days at a time when we enjoyed the “luxury” of not shaving, bathing or changing clothes. We had a few breakdowns, but someone always happened along and gave us a hand. The roads were good everywhere. However, those in South Dakota and Wyoming could stand a lot of improvement. In the Yellowstone and Yosemite parks many stretches were rough and dangerous.

Now, about expenses. I used about 850 gallons of gasoline and spent approximately $250 for gas and oil. We didn’t cook all our own meals as people along the route entertained us frequently at noon and supper. Food purchased along the roadside can be bought from twenty-five to thirty per cent cheaper than in the city markets or stores. With $350 going for food and fuel, the only other additional expenses were tunnel and bridge tolls and the fees to museums and national parks.

Anyone taking such a trip will need a red lantern, rope or chain for towing, flashlights, a tent, provided the trailer does not have sleeping accommodations, first-aid kit, water bucket and a small gasoline or kerosene stove if you do not want to gather wood for fuel. The trip should be carefully planned. One wise method is to procure literature describing the country you intend to visit.

Don’t tie yourself down to a too definite daily schedule. Stop at the places which appeal to you, have a good time and don’t work yourself to death merely trying to cover ground. In every state there are comfortable and cheap tourist camps and the national parks have fine camp sites.

Don’t let someone tell you, “It can’t be done.” I had that said to me many times. Well, I did it. And if I can do it, you can. But you can’t do any loafing and you can’t waste any money if you try to cover the United States and take a glimpse of Canada and Mexico all within thirty days and for $100 each for four persons.

But here’s luck if you do undertake it and I’ll venture the assertion that when you get back you will feel healthier and stronger and be more enthusiastic about your country than ever before.