In 1930 airplanes of the 94th Pursuit Squadron were flying around with little swastikas on the side of their planes. (second page, second picture) I wonder how long that lasted. 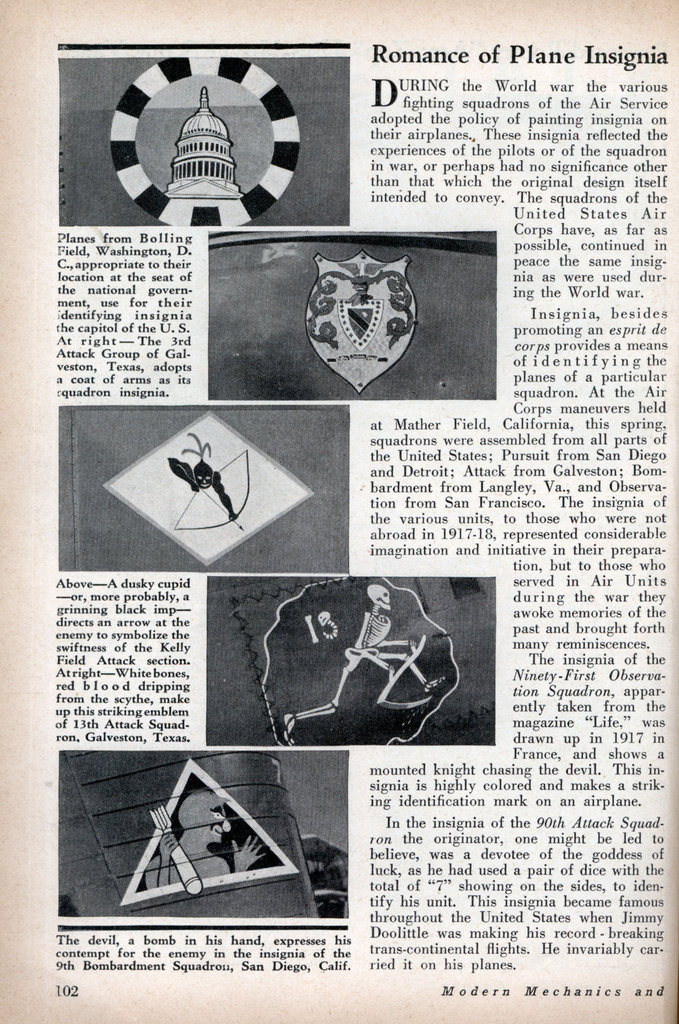 DURING the World war the various fighting squadrons of the Air Service adopted the policy of painting insignia on their airplanes.. These insignia reflected the experiences of the pilots or of the squadron in war, or perhaps had no significance other than that which the original design itself intended to convey. The squadrons of the United States Air Corps have, as far as possible, continued in peace the same insignia as were used during the World war.

Insignia, besides promoting an esprit de corps provides a means of identifying the planes of a particular squadron. At the Air Corps maneuvers held at Mather Field, California, this spring, squadrons were assembled from all parts of the United States; Pursuit from San Diego and Detroit; Attack from Galveston; Bombardment from Langley, Va., and Observation from San Francisco. The insignia of the various units, to those who were not abroad in 1917-18, represented considerable imagination and initiative in their preparation, but to those who served in Air Units during the war they awoke memories of the past and brought forth many reminiscences.

The insignia of the Ninety-First Observation Squadron, apparently taken from the magazine “Life,” was drawn up in 1917 in France, and shows a mounted knight chasing the devil. This insignia is highly colored and makes a striking identification mark on an airplane.

In the insignia of the 90th Attack Squadron the originator, one might be led to believe, was a devotee of the goddess of luck, as he had used a pair of dice with the total of “7” showing on the sides, to identify his unit. This insignia became famous throughout the United States when Jimmy Doolittle was making his record – breaking trans-continental flights. He invariably carried it on his planes.

The 13th Attack Squadron has a very striking insignia, woven around Death swinging his scythe. The figure “13” on this emblem is composed of skulls and bones. In the original insignia, used during the World war, the scythe had nicks on it, one for each victory by a member of the 13th Squadron, over a Hun airplane. At the bottom of the insignia were little tombstones in the shape of crosses to indicate the number of victories by the Squadron.

The 11th Bombardment Group has, too, an outstanding insignia, with the humorous element predominating. It shows Mr. Jiggs, the well-known cartoon character, carrying a bomb under his armâ€” evidently for the purpose of hurling it at Maggie at the first available opportunity! In the insignia of the 20th Bombardment Squadron we have a pirate about to hurl a bomb through space. The emblem was, apparently, originated during the time this squadron was in Panama, and has been continued since the organization returned to the United States.

A mule crouching in a position to deliver a “double barrelled’ blow, at the slightest provocation is the picture that identifies the 95th Pursuit Squadron The idea of the wallop from the heels of the mule developed in France after one of the squadron had brought down several Huns. The 17th and 27th Pursuit Squadrons very appropriately adopted as insignia birds diving through space on their prey. The 17th Squadron used the White Owl and the 27th the Falcon, both depicting the bullet-like drop through space when the aerial attack is driven home. Birds have always been popular in designating airplanes.

One of the best insignia seen at the maneuvers was that of the 489th Pursuit Squadron, which depicts a puppy being given chase by a wasp which clings persistently to the end of the dog’s stubby tail.