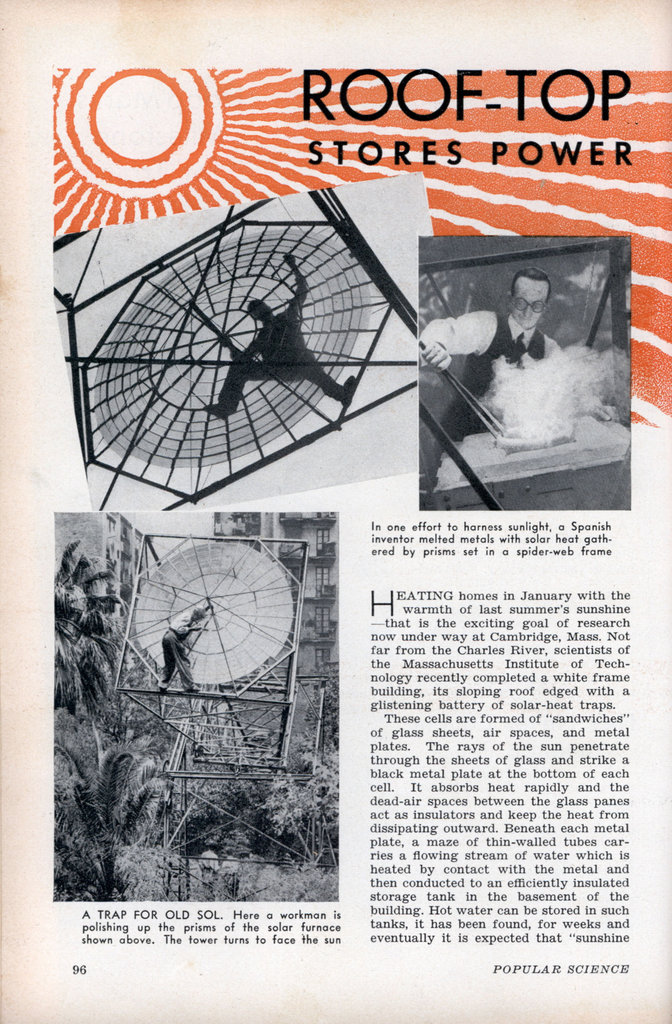 HEATING homes in January with the warmth of last summer’s sunshine â€”that is the exciting goal of research now under way at Cambridge, Mass. Not far from the Charles River, scientists of the Massachusetts Institute of Technology recently completed a white frame building, its sloping roof edged with a glistening battery of solar-heat traps.

These cells are formed of “sandwiches” of glass sheets, air spaces, and metal plates. The rays of the sun penetrate through the sheets of glass and strike a black metal plate at the bottom of each cell. It absorbs heat rapidly and the dead-air spaces between the glass panes act as insulators and keep the heat from dissipating outward. Beneath each metal plate, a maze of thin-walled tubes carries a flowing stream of water which is heated by contact with the metal and then conducted to an efficiently insulated storage tank in the basement of the building. Hot water can be stored in such tanks, it has been found, for weeks and eventually it is expected that “sunshine furnaces’ of the kind will be able to hoard summer heat for midwinter use.

For more than twenty centuries, experimenters have been striving to store up summer heat and trap the endless flow of power from the sun. Recent efforts to crack this age-old scientific nut range from Dr. C. C. Abbot’s solar furnace to the “sunshine sandwiches” of Dr. Bruno Lange, of Berlin, Germany. His photo-electric cells generate current when struck by the sun’s rays. Other experimenters have employed mirrors, titled by clockwork, and giant lenses, concentrating heat to melt metals.