This is the ultimate stoner car. Use the hookah up front to get stoned, then when you get the munchies you can just hop in back and grill some hot dogs. 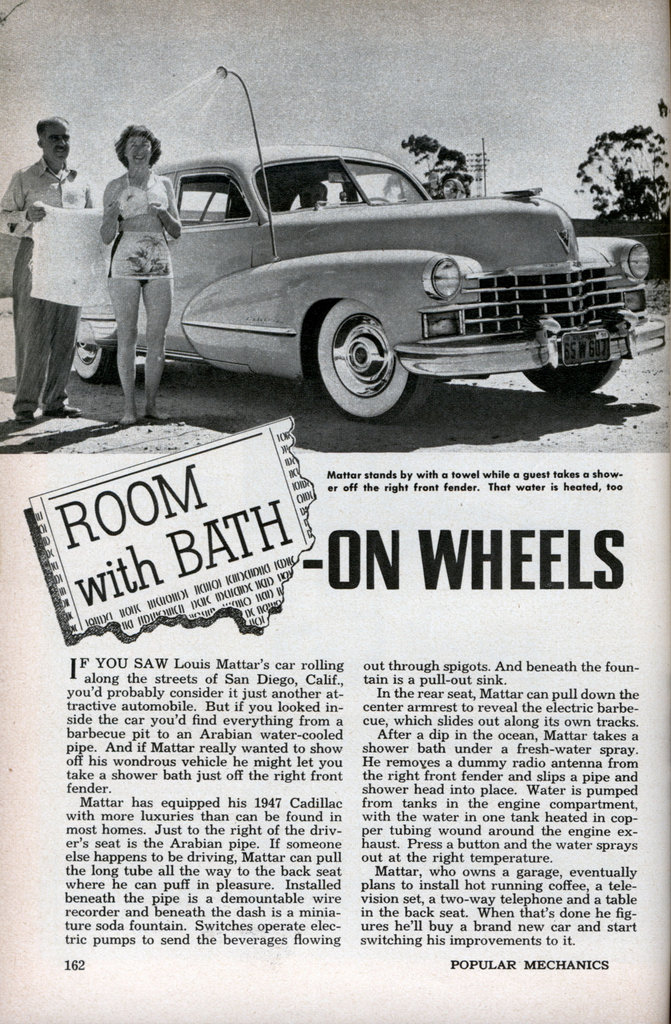 Room with Bath – On Wheels

IF YOU SAW Louis Matter’s car rolling along the streets of San Diego, Calif., you’d probably consider it just another attractive automobile. But if you looked inside the car you’d find everything from a barbecue pit to an Arabian water-cooled pipe. And if Mattar really wanted to show off his wondrous vehicle he might let you take a shower bath just off the right front fender.

Mattar has equipped his 1947 Cadillac with more luxuries than can be found in most homes. Just to the right of the driver’s seat is the Arabian pipe. If someone else happens to be driving, Mattar can pull the long tube all the way to the back seat where he can puff in pleasure. Installed beneath the pipe is a demountable wire recorder and beneath the dash is a miniature soda fountain. Switches operate electric pumps to send the beverages flowing
out through spigots. And beneath the fountain is a pull-out sink.

In the rear seat, Mattar can pull down the center armrest to reveal the electric barbecue, which slides out along its own tracks.

After a dip in the ocean, Mattar takes a shower bath under a fresh-water spray. He removes a dummy radio antenna from the right front fender and slips a pipe and shower head into place. Water is pumped from tanks in the engine compartment, with the water in one tank heated in copper tubing wound around the engine exhaust. Press a button and the water sprays out at the right temperature.

Mattar, who owns a garage, eventually plans to install hot running coffee, a television set, a two-way telephone and a table in the back seat. When that’s done he figures he’ll buy a brand new car and start switching his improvements to it.