Popular Mechanics
Issue: May, 1924
Posted in: Movies
No Comments on Rubber “Actors” Lend Realism to Movies (May, 1924) 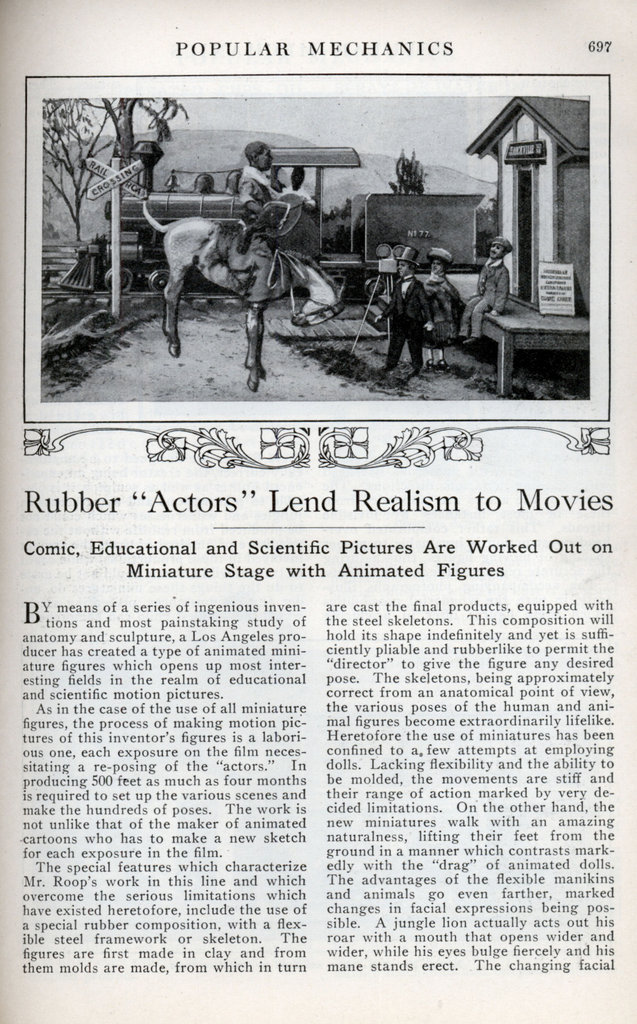 Comic, Educational and Scientific Pictures Are Worked Out on Miniature Stage with Animated Figures

BY means of a series of ingenious inventions and most painstaking study of anatomy and sculpture, a Los Angeles producer has created a type of animated miniature figures which opens up most interesting fields in the realm of educational and scientific motion pictures.

As in the case of the use of all miniature figures, the process of making motion pictures of this inventor’s figures is a laborious one, each exposure on the film necessitating a re-posing of the “actors.” In producing 500 feet as much as four months is required to set up the various scenes and make the hundreds of poses. The work is not unlike that of the maker of animated cartoons who has to make a new sketch for each exposure in the film.

The special features which characterize Mr. Roop’s work in this line and which overcome the serious limitations which have existed heretofore, include the use of a special ruhber composition, with a flexible steel framework or skeleton. The figures are first made in clay and from them molds are made, from which in turn are cast the final products, equipped with the steel skeletons. This composition will hold its shape indefinitely and yet is sufficiently pliable and rubberlike to permit the “director” to give the figure any desired pose. The skeletons, being approximately correct from an anatomical point of view, the various poses of the human and animal figures become extraordinarily lifelike. Heretofore the use of miniatures has been confined to a, few attempts at employing dolls. Lacking flexibility and the ability to be molded, the movements are stiff and their range of action marked by very decided limitations. On the other hand, the new miniatures walk with an amazing naturalness, lifting their feet from the ground in a manner which contrasts markedly with the “drag” of animated dolls. The advantages of the flexible manikins and animals go even farther, marked changes in facial expressions being possible. A jungle lion actually acts out his roar with a mouth that opens wider and wider, while his eyes bulge fiercely and his mane stands erect. The changing facial expression is made even more natural by the use of movable eyes, a feature on which a patent has been sought. The eves used are of glass and are set in sockets in such a way that by inserting a pencil or other instrument in the hole corresponding to the pupil, their position can be changed as desired. Movable lids are provided also, which add to the realistic effect. In conjunction with the use of these figures is the special stage. It is equipped with numerous overhead wires running in various directions. The figures of the actors are suspended from these in most instances by invisible threads. This rather complicated overhead construction is invaluable to proper spacing of moving figures, thus assuring the accurate register of the actor’s motions.

The accompanying photographs illustrate, in part, the wonderful possibilities which these figures offer in producing comics. There is a realism about actual photos of these skillfully designed figures and the stage furnished with the minutest care, which heightens the enjoyment for both juvenile and adult spectators. But while comics offer an important and alluring field for use of these lifelike miniatures, there is an equally attractive field in teaching natural history. As these figures are designed to be anatomically correct, the creator being an experienced hunter as well as sculptor, it is possible to plan actions and show scenes in jungles and wildernesses which could not be produced from real life without the expenditure of hundred of times the amount involved in these productions, while caged or trained wild animals could not be made to do the things these miniatures do, under any circumstances, presenting scenes which the simplest child can comprehend.