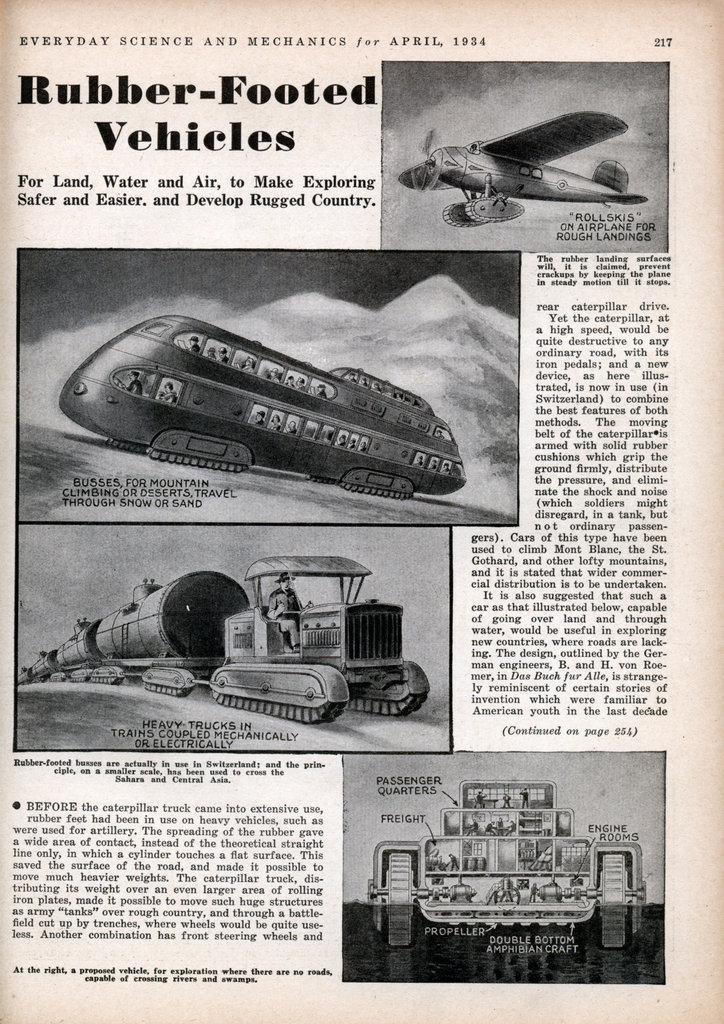 For Land, Water and Air, to Make Exploring Safer and Easier, and Develop Rugged Country.

BEFORE the caterpillar truck came into extensive use, rubber feet had been in use on heavy vehicles, such as were used for artillery. The spreading of the rubber gave a wide area of contact, instead of the theoretical straight line only, in which a cylinder touches a flat surface. This saved the surface of the road, and made it possible to move much heavier weights. The caterpillar truck, distributing its weight over an even larger area of rolling iron plates, made it possible to move such huge structures as army “tanks” over rough country, and through a battlefield cut up by trenches, where wheels would be quite useless. Another combination has front steering wheels and

rear caterpillar drive. Yet the caterpillar, at a high speed, would be quite destructive to any ordinary road, with its iron pedals; and a new device, as here illustrated, is now in use (in Switzerland) to combine the best features of both methods. The moving belt of the caterpillar#is armed with solid rubber cushions which grip the ground firmly, distribute the pressure, and eliminate the shock and noise (which soldiers might disregard, in a tank, but not ordinary passengers). Cars of this type have been used to climb Mont Blanc, the St. Gothard, and other lofty mountains, and it is stated that wider commercial distribution is to be undertaken. It is also suggested that such a car as that illustrated below, capable of going over land and through water, would be useful in exploring new countries, where roads are lacking. The design, outlined by the German engineers, B. and H. von Roemer, in Das Buch fur Alle, is strangely reminiscent of certain stories of invention which were familiar to American youth in the last decade

of the Nineteenth Century—those about Jack Wright and Frank Reade. The greatest difficulty, however, would be that of power. We might suppose an explorer’s vehicle equipped with gas and wood-alcohol producers, utilizing wood for fuel—as this is available where petroleum is not.