This looks like it’s ripped straight from a Bond movie. Well, either that or GI Joe. I love the inflatable camouflage rocks. 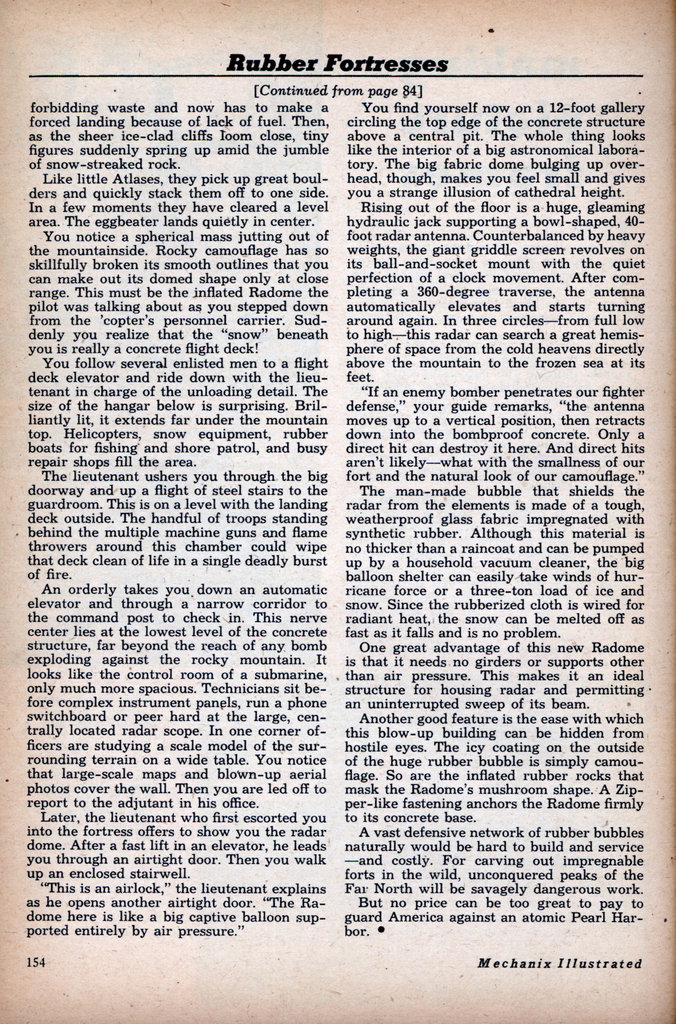 Here’s how the Air Force’s new air-building can hide the radar sentries guarding America against attack.

CAN we avert an atomic Pearl Harbor? Yes, we canâ€”with rubber bubbles!

For a string of giant rubber bubbles, housing radar sentries, hidden in the icy peaks of America’s northernmost mountains, could be our first line of defense against any A-bomb attack. The secret of these amazing rubber fortresses is the new Radome, a revolutionary shelter of rubber and glass textile, developed by the Cornell Aeronautical Laboratory Inc. for the Air Force research center at Red Bank, N. J.

These radar outposts could be the modern equivalent of the frontier forts of Indian days. Miles apart in practically impassable wilderness, each must be a well-hidden, self-contained fortress, capable of guarding its precious equipment securely against any sneak attack. And sudden assault is just as sure as death and taxes. For if war comes again, the blinding of an enemy’s eyes will be the first step before wholesale atomic destruction!

Based upon the latest military and scientific developments, here is a closeup picture of how the far-flung radar ring depicted in the February 1949 issue of Mechanix Illustrated can protect our country:

To obtain maximum radar range and permit easy defense by a minimum garrison, our rubber forts, like castles of the ancient barons along the Rhine, must roost on the most inaccessible arctic peaks. For concealment and protection against bombing, most of the installation must be buried in the rock and heavily sheathed with concrete. The parts above groundâ€”the balloon dome protecting the radar antenna and the level helicopter deckâ€”will be well camouflaged by air-inflated rubber rocks. These will be fastened down in set patterns but can be easily removed to clear the way for flying operations.

All ground approaches to the fortress and any nearby areas that might be used for paratroop landings, will have been blasted away or neutralized by gun bunkers. The only way to reach the fortress will be by helicopter. As machine guns and flame throwers can sweep the landing platform, the chances of a successful assault by air will be nil. A ‘copter ferry service will supply the garrison with both troops and provisions.

In addition to the command post in the bombproof lower level, the station will have comfortable, air-conditioned living quarters for its technical experts and guards. Unusually complete recreational facilities will help cut down the morale problems inevitable in such a confined life. A large, circular lounge, two stories high, will give the illusion of space indoors. A good library and well-equipped music, movie, television and card rooms will provide the men with plenty of entertainment during off-duty hours.

Beneath the landing platform will be a combination hangar and gymnasium with a running track inside the base of the Radome. Athletic facilities here will permit the men to take part in vigorous sports despite the worst polar blizzards outside. Several small patrol helicopters, based at the fort, will fly hunting, fishing and mountain-climbing parties to the most favored spots in the vicinity. At frequent intervals the men will take turns going on short furloughs to Alaskan and Canadian cities in order to prevent “cabin fever” and thus keep the garrison on its toes.

Let’s suppose you are a Signal Corps officer just assigned to a rubber fortress. A transport plane takes you to the most northerly air base in the area. Here, in what already looks like a virgin wilderness, you transfer to a big helicopter on the snowy apron. It is a twin-rotor job with a combination cargo and personnel carrier slung beneath its belly.

The giant eggbeater levels off at 5000 feet and heads toward a notch in the distant mountains. After hours of flying high into the cold blue yonder, the ‘copter finally hovers over a rocky peak.

The craft starts windmilling slowly earthward. There’s no sign of life on the bare crags. You wonder if the pilot has lost his way in this forbidding waste and now has to make a forced landing because of lack of fuel. Then, as the sheer ice-clad cliffs loom close, tiny figures suddenly spring up amid the jumble of snow-streaked rock.

Like little Atlases, they pick up great boulders and quickly stack them off to one side. In a few moments they have cleared a level area. The eggbeater lands quietly in center.

You notice a spherical mass jutting out of the mountainside. Rocky camouflage has so skillfully broken its smooth outlines that you can make out its domed shape only at close range. This must be the inflated Radome the pilot was talking about as you stepped down from the ‘copter’s personnel carrier. Suddenly you realize that the “snow” beneath you is really a concrete flight deck!

You follow several enlisted men to a flight deck elevator and ride down with the lieutenant in charge of the unloading detail. The size of the hangar below is surprising. Brilliantly lit, it extends far under the mountain top. Helicopters, snow equipment, rubber boats for fishing and shore patrol, and busy repair shops fill the area.

The lieutenant ushers you through the big doorway and up a flight of steel stairs to the guardroom. This is on a level with the landing deck outside. The handful of troops standing behind the multiple machine guns and flame throwers around this chamber could wipe that deck clean of life in a single deadly burst of fire.

An orderly takes you down an automatic elevator and through a narrow corridor to the command post to check in. This nerve center lies at the lowest level of the concrete structure, far beyond the reach of any bomb exploding against the rocky mountain. It looks like the control room of a submarine, only much more spacious. Technicians sit before complex instrument panels, run a phone switchboard or peer hard at the large, centrally located radar scope. In one corner officers are studying a scale model of the surrounding terrain on a wide table. You notice that large-scale maps and blown-up aerial photos cover the wall. Then you are led off to report to the adjutant in his office.

Later, the lieutenant who first escorted you into the fortress offers to show you the radar dome. After a fast lift in an elevator, he leads you through an airtight door. Then you walk up an enclosed stairwell.

“This is an airlock,” the lieutenant explains as he opens another airtight door. The Radome here is like a big captive balloon supported entirely by air pressure.”

You find yourself now on a 12-foot gallery circling the top edge of the concrete structure above a central pit. The whole thing looks like the interior of a big astronomical laboratory. The big fabric dome bulging up overhead, though, makes you feel small and gives you a strange illusion of cathedral height.

Rising out of the floor is a huge, gleaming hydraulic jack supporting a bowl-shaped, 40-foot radar antenna. Counterbalanced by heavy weights, the giant griddle screen revolves on its ball-and-socket mount with the quiet perfection of a clock movement. After completing a 360-degree traverse, the antenna

automatically elevates and starts turning around again. In three circlesâ€”from full low to highâ€”this radar can search a great hemisphere of space from the cold heavens directly above the mountain to the frozen sea at its feet.

“If an enemy bomber penetrates our fighter defense,” your guide remarks, “the antenna moves up to a vertical position, then retracts down into the bombproof concrete. Only a direct hit can destroy it here. And direct hits aren’t likelyâ€”what with the smallness of our fort and the natural look of our camouflage.”

The man-made bubble that shields the radar from the elements is made of a tough, weatherproof glass fabric impregnated with synthetic rubber. Although this material is no thicker than a raincoat and can be pumped up by a household vacuum cleaner, the big balloon shelter can easily take winds of hurricane force or a three-ton load of ice and snow. Since the rubberized cloth is wired for radiant heat, the snow can be melted off as fast as it falls and is no problem.

One great advantage of this new Radome is that it needs no girders or supports other than air pressure. This makes it an ideal structure for housing radar and permitting an uninterrupted sweep of its beam.

Another good feature is the ease with which this blow-up building can be hidden from hostile eyes. The icy coating on the outside of the huge rubber bubble is simply camouflage. So are the inflated rubber rocks that mask the Radome’s mushroom shape. A Zipper-like fastening anchors the Radome firmly to its concrete base.

A vast defensive network of rubber bubbles naturally would be hard to build and service â€”and costly. For carving out impregnable forts in the wild, unconquered peaks of the Far North will be savagely dangerous work.

But no price can be too great to pay to guard America against an atomic Pearl Harbor.