Modern Mechanix
Issue: May, 1932
Posted in: General
Tags: alternative energy
4 Comments on Rubber from the SUN – and Power Too! (May, 1932) 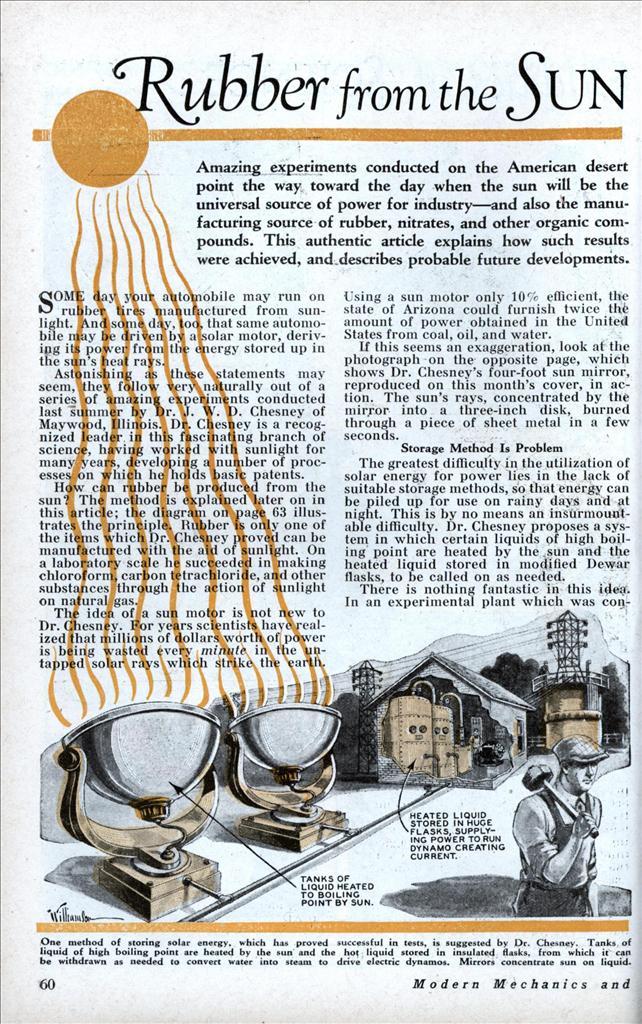 Rubber from the SUN – and Power Too!

Amazing experiments conducted on the American desert point the way toward the day when the sun will be the universal source of power for industry—and also the manufacturing source of rubber, nitrates, and other organic compounds. This authentic article explains how such results were achieved, and describes probable future developments.

SOME day your automobile may run on rubber tires manufactured from sunlight. And some day, too, that same automobile may be driven by a solar motor, deriving its power from the energy stored up in the sun’s heat rays.

Astonishing as these statements may seem, they follow very naturally out of a series of amazing experiments conducted last summer by Dr. J. W. D. Chesney of Maywood, Illinois. Dr. Chesney is a recognized leader in this fascinating branch of science, having worked with sunlight for many years, developing a number of processes on which he holds basic patents.

How can rubber be produced from the sun? The method is explained later on in this article; the diagram on page 63 illustrates the principle. Rubber is only one of the items which Dr. Chesney proved can be manufactured with the aid of sunlight. On a laboratory scale he succeeded in making chloroform, carbon tetrachloride, and other substances through the action of sunlight on natural gas.

The idea of a sun motor is not new to Dr. Chesney. For years scientists have realized that millions of dollars worth of power is being wasted every minute in the untapped solar rays which strike the earth.

Using a sun motor only 107c efficient, the state of Arizona could furnish twice the amount of power obtained in the United States from coal, oil, and water.

If this seems an exaggeration, look at the photograph on the opposite page, which shows Dr. Chesney’s four-foot sun mirror, reproduced on this month’s cover, in action. The sun’s rays, concentrated by the mirror into a three-inch disk, burned through a piece of sheet metal in a few seconds.

Storage Method Is Problem The greatest difficulty in the utilization of solar energy for power lies in the lack of suitable storage methods, so that energy can be piled up for use on rainy days and at night. This is by no means an insurmountable difficulty. Dr. Chesney proposes a system in which certain liquids of high boiling point are heated by the sun and the heated liquid stored in modified Dewar flasks, to be called on as needed.

There is nothing fantastic in this idea. In an experimental plant which was con- structed, thin metal tubes were passed through the hot liquid. When water was poured through the tubes, heated by the liquid, it was transformed into steam. Still another storage method would be to convert solar radiation into thermo-electricity by concentrating sunshine on hot junctions and charging storage batteries. This stunt has actually been done in Chicago. Sunlight concentrated on hot junctions, 100 pairs, produced enough electric current to charge a 6-volt storage battery or to run an electric motor which operated small toys.

Sun Generator Will Come The world awaits a thermo-electric generator; some day it’s bound to come, for present sources of power—coal and oil— are definitely limited. Within a comparatively few years they will be entirely exhausted. Considering these facts, it is amazing how scientific research has lagged behind in this field. Dr. Chesney is convinced that if a small fraction of the money now used in attempts to smash the atom were expended on sun power development, the power question would be forever solved. Suppose, for instance, that you could harness and store the sunshine that falls on the roof of your home. Assuming that you have an average bungalow, 30×40 feet, the amount of sunlight that falls on the 133 yards thus represented equals 220 horsepower—roughly equivalent to the power of four average motor cars, as illustrated in the accompanying drawing. Why, then, are you buying coal, gas, and electricity?

No less interesting than the power possibilities of the sun are its photosynthetic abilities (meaning the capacity of building up compounds with light).

We have already mentioned rubber as being manufactured in this way. Let’s see how Dr. Chesney did it. First he constructed a chromium-plated cylindrical reflector, illustrated herewith, which concentrated the sun’s rays on a fused quartz tube. Quartz was used because it transmits the sun’s ultra-violet rays.

Then he passed a mixture of acetylene and hydrochloric acid gas through mercuric chloride (a catalyst) and vinyl chlorid was formed. Vinyl chlorid, when exposed to the shorter rays of sunlight in the presence of certain uranium salts, is converted into caoutchouc chloride. Caoutchouc is raw rubber, which remains after the chlorine radical is removed from the compound.

Dr. Chesney reports the process of manufacture as very simple, but, because of price, not commercially feasible at present.

Sun chemistry is not a mysterious science. You yourself, if you have ever taken a snapshot with a camera, have performed a successful experiment in sun chemistry, in which refracted sunlight, acting on the sensitive emulsion of plate or film, changed one silver salt into another and thus produced a photographic negative.

Design of Solar Reflector There was nothing in the least complicated about Dr. Chesney’s apparatus. The reflectors used in his sun chemistry experiments can easily be built by almost anyone. Sheets of chromium-plated copper were fastened to a wooden base, as shown in the photographs on this page, producing such a high concentration of solar energy at the focus that it was necessary at times to use water-cooled cells to avoid burning up the end products of the experiments. Temperatures of 2000 to 3000 degrees centigrade were easily obtained by concentrating sunlight.

At this temperature it is possible to make nitrates from the atmosphere. Oxygen and nitrogen from the air is caused to unite at this heat, and if cooled very quickly will dissolve in water as nitric acid. It is difficult to over-estimate the importance of this particular process when one remembers that nitrate fertilizer is the only means of restoring the productiveness of farm land exhausted of its mineral riches through constant use.

Making Chloroform From Natural Gas With this same type of apparatus natural gas was caused to combine with chlorine under action of solar radiation, producing chloroform and many other compounds. Thus far the process has only been conducted on a laboratory scale, but all great chemical discoveries start in the laboratory and are later expanded to commercial proportions. The great American southwest, with its perpetual sunshine and burning deserts, may some day be dotted with hundreds of factories using the sun not only as a source of power for moving their wheels, but also as the prime mover in the process of manufacture.

Sun Baths Taken Internally Sun baths have in recent years become a popular health fad. The ultra-violet rays of the sun convert the ergosterol of the skin into vitamin D, which passes into the circulation and brings about the utilization of certain minerals. Knowing this to be true, Dr. Chesney’s staff attempted to convert ergosterol into vitamin D with natural unconcentrated sunlight. Ergosterol was dissolved in various solvents and exposed to the sun.

In every case success was attained in getting activation in some slight degree, but not in sufficient concentration to make it a commercial feasibility. Refinements now being conducted indicate that the day may come when, instead of exposing our bodies to the sun, we may achieve the same health results by adding a concentrated vitamin source to the diet.

To return to the power possibilities of the sun, one of the photographs on this page shows an experiment which you can easily duplicate if you are skeptical. The direct rays of the sun, streaming through a basement window, struck a reflector and were focused on the hot junction of a Cenco thermo-electric magnet. In a few minutes sufficient electricity was generated to hold up a bucket containing 100 pounds of pig lead.

In a variation of the experiment, under the same condition, sun coming through the window was concentrated on the slit of a thermocouple, and the current produced detected on a galvanometer. With 25 couples a small electric motor was caused to run. Any experimenter can perform part of this feat if he has a delicate galvanometer, a parabolic mirror, and a small amount of copper and wire for thermocouples.

Checking the accepted figures which give the solar constant as 1.7 horsepower per square yard, Dr. Chesney found the total to average slightly higher than this. Reduced into terms of dollars and cents this means that every second $478,000,000 worth of solar radiation is wasted.