I scanned this primarily because the first page looks like part of a poster for a James Bond film, and Gernreich looks like he should be a Bond villain. 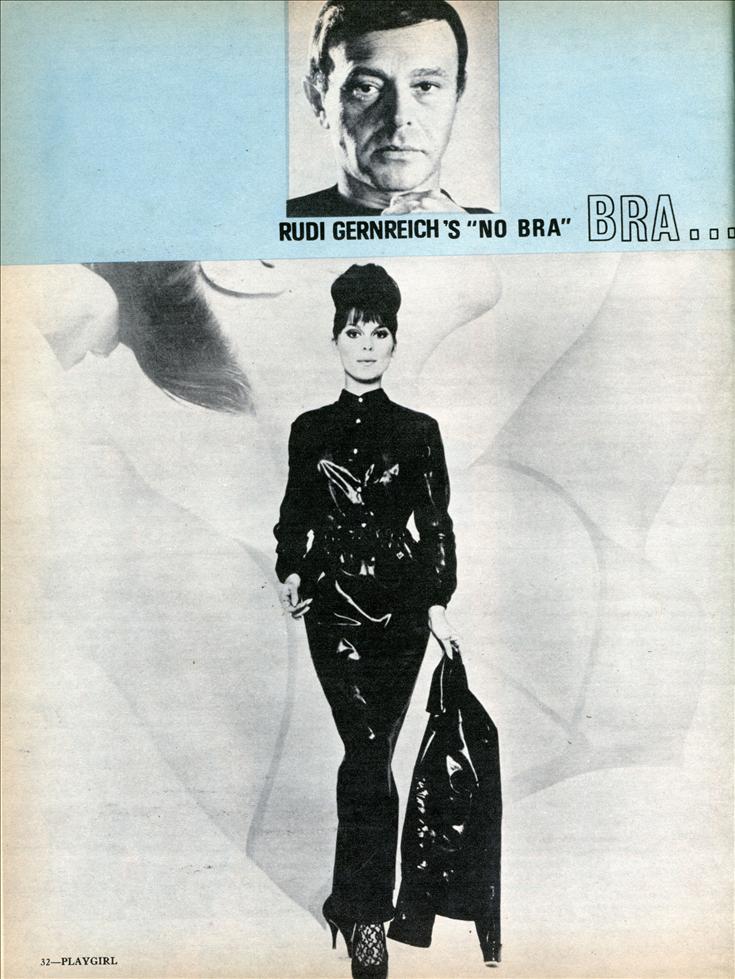 If you design a revolutionary “No Bra” bra, and it’s sales skyrocket beyond the wildest dreams, because it’s popular with playgirls everywhere… what do you do for an encore?

Why, you design a “NO SIDE,” also a “NO BACK,” and even a “NO FRONT” bra. Naturally not just for a tour-de-force, nor even for a gag, but because playgirls who are wearing the “No Bra” bra have gotten “hooked” on its new-found liberation and the feeling of freedom it gives them and they don’t want to go back to wearing old-fashioned harnesses under a variety of decolletages that rule out wearing a bandeau underneath, no matter how sheer.

“In the past, the only excitement in our field came from new test-tube fibers. There have been no real innovations in undergarment styling for close to 25 years,” says an executive for Exquisite Form, which has an exclusive contract with Rudi Gernreich for the design of bras and foundation garments.

“Our industry was literally starved for design freshness and talent. In Gernreich we have found a fresh, exciting, vital talent, a talent that had never done this before, in an industry that had never done it before, either. The ‘No Bra’ bra he designed for us last fall started a whole new trend in the undergarment industry. And anyone who imagines that Gernreich merely lends his name for use on the labels, simply doesn’t know Gernreich, nor the anguished and protracted labor pains involved in bringing forth, after what must have run literally into hundreds of tentative working samples, the exact, and exactly engineered, technical masterpiece which Rudi has envisioned, and obstinately kept holding out for. We not only had to devise new skills and invent new techniques for him, but also new machinery. The present quartette of ‘No’ bras are produced by us. But the styling is, every millimeter of it, Rudi Gernreich’s.”

The “No SIDE” bra is the new 1965 version of the original “No Bra,” a backless bandeau except for the narrow stretch that also edges the sheer nylon tricot cups and then continues around to the back to hook closed . . . sans sides. Just two sheer bust cups, cantilevered by a continuum of stretch tapes strategically placed. As in all four “No” bras, the transparent tricot bust cup is entirely seamless, ingeniously cut part on the bias, part on the half-bias, with just a tiny dart to consolidate its cup shape. It will come in sizes 32 to 36, A and B cups, in white, black, and nude.

The “NO BACK” bra—and this one’s a real beauty— is bare to the waist in back, held in place with a narrow contour stretch-waistband. The cups and midriff are the same transparent nylon tricot. But, to compensate for the non-existent back, it has sides of a more persuasive nature, in the form of sheerest Lycra spandex power net. It will come in two lengths—the longer waist for the longer-waisted girls; and the regular length for the average woman. Sizes 32 to 36, A, B, and C cups, in white, black, and nude.

The “NO FRONT” plunge all-in-none maillot is the most revolutionary; technically the most perfect, and withal, the most practical and most lithe and unencumbering foundation garment you have ever seen or worn. Its top is the most “nothing on under” garment in existence, but the rest is sheer Lycra spandex power-net that exercises softest control over the lower ribcage, waistline, abdomen, hipline and buttocks, and also offers the needed support many women with quite good figures require to ward off body fatigue.

It derives its “No Front” name from the fact that the transparent tricot bra cups are literally half cups. They start at the shoulder . . . join the tricot under the cups (for artful support) and then plunge down to mid-ribcage. The narrow stretch bands, which continue right from the shoulder, edge the plunge and then crisscross to outline the front panel of the power-net portion, in what may be the neatest bit of cantilevering this side of the new Verrazano-Narrows Bridge. This true miracle of a wunder-under will come in sizes 32 to 36, in white, black, and nude.

Having set off a whole chain reaction… liberating women from torturous, rigid “corseting” with the “No Bra” bra, it was only natural that the combined skills and talents of Exquisite Form and Rudi Gernreich should now follow with the most carefully thought out, most technically advanced and dressmaker-oriented variety of companion undergarments to meet a variety of outerwear needs. The first time a woman puts on any of the “No” garments, she inevitably expresses pleased surprise at how “free” and “natural” she feels . . . and how surprisingly supported. And once women have known this new-found freedom, they mean to keep it.