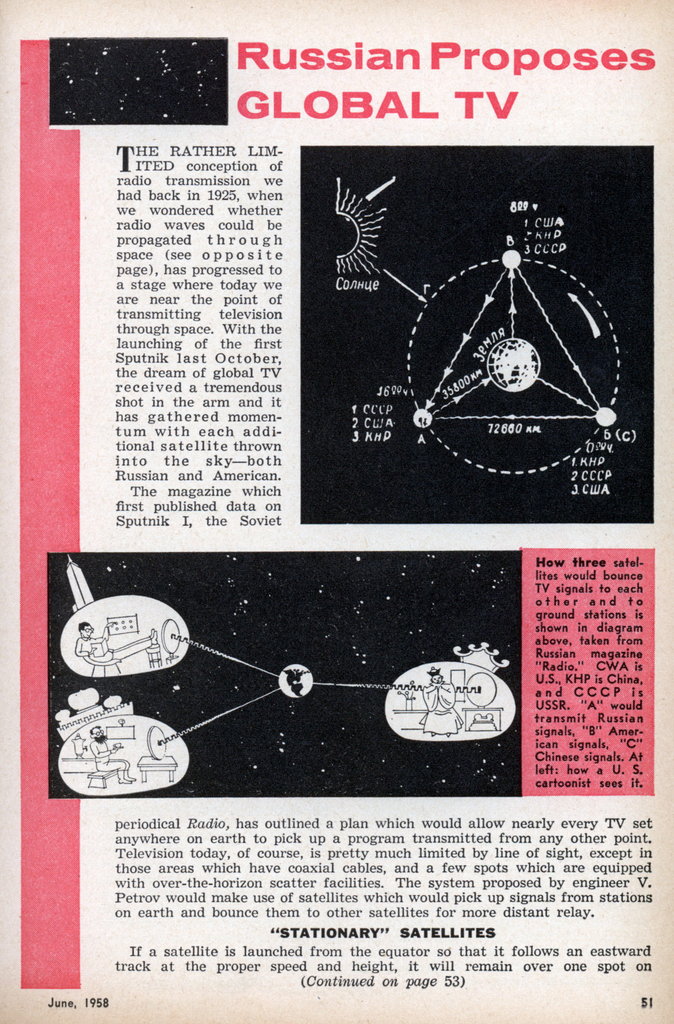 THE RATHER LIMITED conception of radio transmission we had back in 1925, when we wondered whether radio waves could be propagated through space (see opposite page), has progressed to a stage where today we are near the point of transmitting television through space. With the launching of the first Sputnik last October, the dream of global TV received a tremendous shot in the arm and it has gathered momentum with each additional satellite thrown into the skyâ€”both Russian and American. The magazine which first published data on Sputnik I, the Soviet periodical Radio, has outlined a plan which would allow nearly every TV set anywhere on earth to pick up a program transmitted from any other point. Television today, of course, is pretty much limited by line of sight, except in those areas which have coaxial cables, and a few spots which are equipped with over-the-horizon scatter facilities. The system proposed by engineer V. Petrov would make use of satellites which would pick up signals from stations on earth and bounce them to other satellites for more distant relay.

If a satellite is launched from the equator so that it follows an eastward track at the proper speed and height, it will remain over one spot on the equator. In other words, if it went into orbit over Belem in Brazil, or Stanleyville in the Belgian Congo, or Singapore in Malaya, it would remain fixed in the sky over that spot. This is becauseâ€”if the velocity and height are correctâ€”the speed of the satellite will exactly match the eastward rotation of the earth. It will be making an orbit of the earth once in 24 hours (compared to the 90 to 106 minutes or so for the present satellites. Since the earth rotates on its axis once in 24 hours, there will be no relative motion between the two spheres.

According to Mr. Petrov’s article, the satellite would have to be orbited at a height of about 22,000 miles above the earth, launched at a speed of about 27,500 miles per hour. However, there is apparently some discrepancy in the latter figure, perhaps due to a typographical error in the magazine Radio, since at that speed a rocket would shoot out into space (“escape velocity,” the speed at which a body will free itself from the pull of gravity, is slightly over 25,000 miles per hour). The speed estimated as needed to reach such an altitude to maintain a 24-hour orbit is somewhat under 25,000 miles per hour.

Mr. Petrov points out that due to the unequal distribution of the earth’s mass near the equator, “the plane of the satellite orbit will slowly shift around the earth’s axis with an angular velocity of 20 seconds an hour.” In addition, there might be some deviation caused by the pull of the moon and sun. This is not considered a drawback, since the system would require three satellites set in orbit a fixed distance from each other. All three would be subject to the shift, so would remain in the same relative position.

“Let us imagine,” writes Mr. Petrov, “that three artificial earth satellites are launched from one place situated on the equator. To accomplish the object of a global relay of TV broadcasts, the satellites must be launched with an interval of just eight hours apart. In addition, all three satellites placed in a 35,800-km. distant orbit must be spaced 120Â° from each other and will then be 72,660 km. (45,121 miles) apart in space. In this case, all three satellites will be motionless with respect to each other and the earth, since their angular velocities are identical and equal to the earth’s angular velocity.

“Thus, each of the three satellites will be over one and the same terrestrial TV center (with a shift of 0.3 minute of arc per hour). At the same time all three satellites will, in relation to world space, be moving with a global velocity of 3076 km. hour or 1810 miles per hour.” [It is believed in the U. S. that a more accurate figure would be about 6000 miles per hour.]

“Bearing in mind the annual rotation of the earth with its moon around the sun and the equatorial position of the earth’s artificial satellites, each of them can conduct reception of TV programs from the earth through the western satellite and transmit this program simultaneously to their central TV stations on earth. It must be borne in mind besides that the direction of radiation from the sun should never coincide with the communication line direction, as this can create serious interferences.

“Let us assume that one satellite is over USSR, the second is over the Chinese Peoples Republic [Red China] and the third over USA. The transmitting TV center operates from 0000 to 0800 hours (by local time); this secures reception from the western satellite from 1600 to 2400 hours. With such an arrangement of stations, the USSR can operate on USA, the USA on China, and China on USSR. To use three other combinations of TV transmission corresponding to the same reception intervals (from 1600 to 2400), each of the TV centers must operate from 0800 to 1600 hours.

“Under such a time schedule and system of transmissions, the direction of the solar radiation will never coincide with the communication line direction. An exception is moments of shifting from transmission to reception at point A [in diagram on page 51], when the direction of solar radiation coincides with communication line earth â€”C; at the same time, however, the artificial earth satellite situated at point C is screened by the earth.

“The second case when solar radiation direction coincides with communication line occurs when the satellite arrives at point r; however, at the same time, the sun’s radiation is directed toward transmitting waves coming from the earth. Thus, the sun does not shine on the satellite’s reception antenna.

“All the aforesaid permits assuming that with directional antenna systems interference from solar radiation will not have a significant effect on the quality of TV transmissions.”

WHICH BANDS WILL BE USED?

While transmission on u.h.f. short waves is desirable from the viewpoint of the

weight and size of requisite relay units as well as gain in narrow antenna radiation patterns, the Russian designer is inclined to reject this possibility because it requires too exacting stability in the position of the orbiting satellites.

Current satellite exploration in orbits of 200 to 2000 miles from earth should throw new light on wave propagation in outer space, according to Mr. Petrov, who adds: “. . . but it can already be said that satellite reception of TV programs from earth will most probably be realized on the meter wave band, and satellite to earth transmission will be on microwaves, or even millimeter waves, in view of the desirability of minimal weights and dimensions.

“The attenuation of radio waves in cosmic space at a distance of 35,800 km. from earth will be the deciding factor,” Mr. Petrov stated. “The bulk of the weight of radio equipment will be the power source; therefore, conversion of atomic energy to electric power is a most important problem of the global TV relay system.”

A minimum of 10-kw. antenna power, with 100-kw. power source, is what Mr. Petrov estimates for a projected TV space station. He suggests that TV transmission in the future by pulsed instead of continuous radiation may cut down power requirements to one hundredth of the figure now estimated.

“At any rate,” Mr. Petrov concludes, “the speed of development in peaceful use of atomic energy permits assuming that lightweight atomic power supply sources will be brought into being a great deal sooner than an earth satellite will be put in orbit at 35,800-km. altitude.”