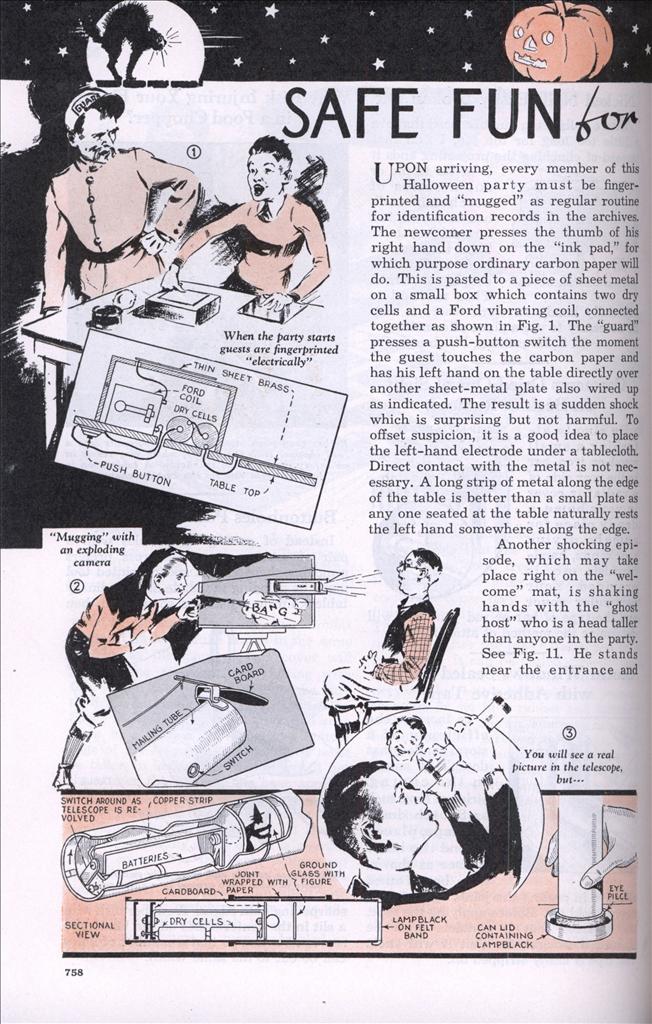 UPON arriving, every member of this Halloween party must be fingerprinted and “mugged” as regular routine for identification records in the archives. The newcomer presses the thumb of his right hand down on the “ink pad,” for which purpose ordinary carbon paper will do. This is pasted to a piece of sheet metal on a small box which contains two dry cells and a Ford vibrating coil, connected together as shown in Fig. 1. The “guard” presses a push-button switch the moment the guest touches the carbon paper and has his left hand on the table directly over another sheet-metal plate also wired up as indicated. The result is a sudden shock which is surprising but not harmful. To offset suspicion, it is a good idea to place the left-hand electrode under a tablecloth. Direct contact with the metal is not necessary. A long strip of metal along the edge of the table is better than a small plate as any one seated at the table naturally rests the left hand somewhere along the edge.

Another shocking episode, which may take place right on the “welcome” mat, is shaking hands with the “ghost host” who is a head taller than anyone in the party. See Fig. 11. He stands near the entrance and extends his hand to the guest who takes hold of a cloth glove having four wiggly coil-spring fingers. These and a metal door mat are the electrodes, and are connected to a vibrating coil or a toy shocking machine operated by someone behind the ghost. The ghost has pearly eyes, which look as if they were suspended in void space of an empty hood.

The next job to get the records straight is mugging. This is done in a semidarkened room with a cardboard camera as in Fig. 2. The startling effect comes when the light is suddenly flashed and a cap pistol is fired at the same instant. After this, everything tried on the newcomer will be looked upon with great suspicion but he may be convinced to observe Mars without a shock or a scare. He will actually see something through the enchanted telescope, pictured in Fig. 3. When the star gazer first puts it to his eye he sees nothing, and is told to revolve it until he does. The eyepiece has a felt rim dipped in lampblack, which leaves an interesting ring around the eye. However, the victim has his reward for with one complete revolution of the telescope, a swinging switch lever makes contact and a small light inside reveals a witch or comic figure. To make the telescope, use a mailing tube about 14 in. long and 2-1/2 in. in diameter. Cardboard partitions hold the lamp bulb and the revolving switch, which are joined by a copper strip. The switch must work freely. By making the tube in two parts, the assembly is easy. Paper wrapped around it completes the joint. Four bands of black paper are wrapped around the telescope to make the sooty eyepiece less conspicuous.

Fig. 4 shows an elaboration of the popular “grab-bag” idea. In this case a large carton is equipped with three shelves, which fold up against the sides of the box, giving free access to the favors for guests in the bottom. Lights are arranged so that the inside of the box is dark. After two or three merrymakers have drawn prizes from the box, an attendant “in the know” lets down one of the shelves by means of a concealed string. This shelf may have on it a shallow pan of lard, or a sheet of paper coated with lampblack or graphite and oil, or red grease—anything that will not flow when the shelf is in the vertical position. In the laughter which follows the victim’s predicament, the attendant draws up the shelf and another guest is invited to draw from the box, this one of course brings out a favor. Eventually the other two shelves are let down to provoke more laughter.

A collapsible chair can easily be made from a common kitchen chair, and, if others of the same design are placed in the room, the tricky one will not be noticeable. Remove the legs and round off both ends as in Fig. 6. They are then joined in two pairs consisting of one front and one back leg connected with a rung. Coil springs, concealed inside of thin tubes are substituted for the front and rear rungs.

The tubes should fit into the holes formerly occupied by the rungs, and are painted to resemble them. As soon as a guest sits on the chair the tubes pull out and the chair sprawls. Strong tension springs should be used.

A most surprising effect is afforded by the “X-ray” helmet shown in Fig. 7. This, briefly, is a cardboard box with two mirrors arranged to throw the vision directly behind. The user of the helmet will have the strange sensation of seeing what appears to be the foreground receding from him as he progresses, and although there may appear to be an open door ahead, more likely he will fetch up against a wall.

For a confetti blizzard, an electric fan is rigged as shown in Fig. 8. This also can be operated by an extension switch. Make a large cardboard cylinder to fit over the fan frame, paste a disk of tissue over the front end, just enough to hold it until the blast strikes it, and then fill the space half full of confetti. When the unwary guest steps in front of the fan, he is deluged with a shower of confetti.

Ideas for Halloween costumes are pictured in Figs. 9 and 10. The frog suit is an ordinary union suit dyed a light green, with dark green cloth spots sewed or cemented on. Cardboard, plywood, wire and doth are all that is necessary to make the turtle costume. By cutting the back halves as indicated and joining along the ridge with adhesive tape, a very convincing shell can be made. The anchor is simply made of plywood and cardboard, and the wearer should be clad in trunks and have tattoo figures on arms and legs painted with harmless coloring, such as fruit juice.