If you build one of these, you too could be this cool. 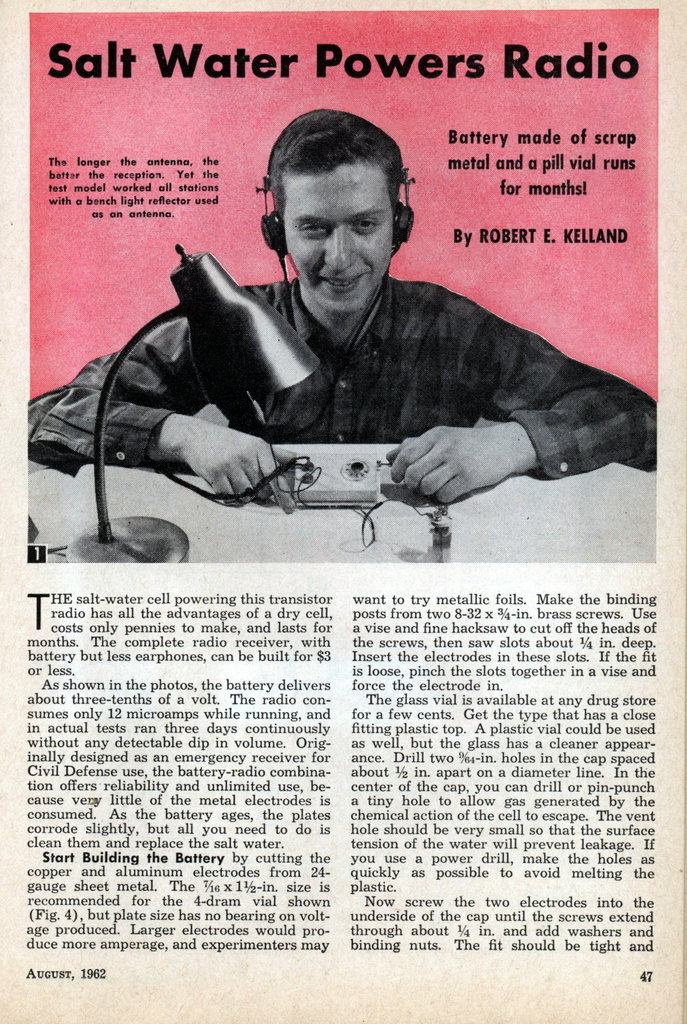 Battery made of scrap metal and a pill vial runs for months!

THE salt-water cell powering this transistor radio has all the advantages of a dry cell, costs only pennies to make, and lasts for months. The complete radio receiver, with battery but less earphones, can be built for $3 or less.

As shown in the photos, the battery delivers about three-tenths of a volt. The radio consumes only 12 microamps while running, and in actual tests ran three days continuously without any detectable dip in volume. Originally designed as an emergency receiver for Civil Defense use, the battery-radio combination offers reliability and unlimited use, because very little of the metal electrodes is consumed. As the battery ages, the plates corrode slightly, but all you need to do is clean them and replace the salt water.

Start Building the Battery by cutting the copper and aluminum electrodes from 24-gauge sheet metal. The 7/16 x 1-1/2-in. size is recommended for the 4-dram vial shown (Fig. 4), but plate size has no bearing on voltage produced. Larger electrodes would produce more amperage, and experimenters may want to try metallic foils. Make the binding posts from two 8-32 x 3/4-in. brass screws. Use a vise and fine hacksaw to cut off the heads of the screws, then saw slots about 1/4 in. deep. Insert the electrodes in these slots. If the fit is loose, pinch the slots together in a vise and force the electrode in.

The glass vial is available at any drug store for a few cents. Get the type that has a close fitting plastic top. A plastic vial could be used as well, but the glass has a cleaner appearance. Drill two 9/64-in. holes in the cap spaced about 1/2 in. apart on a diameter line. In the center of the cap, you can drill or pin-punch a tiny hole to allow gas generated by the chemical action of the cell to escape. The vent hole should be very small so that the surface tension of the water will prevent leakage. If you use a power drill, make the holes as quickly as possible to avoid melting the plastic.

Now screw the two electrodes into the underside of the cap until the screws extend through about 1/4 in. and add washers and binding nuts. The fit should be tight and waterproof. To test the battery, fill the vial about three-quarters full with clean water and add a pinch of salt. Check output with a VOM. Though it may not seem like a large current, you’ll find it adequate to operate may low current projects. Provided that resistance of the circuit is kept high, the battery will be suprisingly constant.

The Transistor Radio uses a minimum of parts and can be assembled in half an hour. The author used a 2N1265 transistor and an IN64 diode, but you can substitute other general purpose units (See Materials List). Editor’s Note: The assembly shown in the photos was tested in a basement lab, with the antenna lead clipped to the reflector of a lamp. After tuning the ferrite coil, reception was crisp on all Chicago-area stations. The radio ran constantly for 85 hours. An amplifier was connected to the earphone jacks and music came through surprising clear and free of background noise.

Drill the holes for the tuning capacitor, antenna coil, and headphone jacks and mount as in Fig. 4. The miniature capacitors must be kept clean and handled carefully to avoid damaging the plates. You can use a socket for the transistor or simply solder it into the circuit as shown. Make sure you use a heat sink to dissipate soldering heat. Hold the iron to the joints only long enough to make a good connection, otherwise the parts may be ruined.

Feed the battery and antenna wires through holes in the top of the back of the box. Color code the battery leads red, positive (to copper) ; and black, negative (to aluminum), and attach a small alligator clip to the antenna lead wire so it can easily be hooked to various antennas you may want to try.

Test the radio by connecting the battery and plugging in a high-impedance (2000 ohms or more) earphone or headset. Be sure battery polarity is correct. If you connect backwards, you won’t harm the transistor, and may actually get reception, but it will be far lower in volume. Clip the antenna lead to any suitable ungrounded metal object such as a bare spot on a telephone dial, a bed spring or a metal clothesline and tune for a station. If your connections are correct and all components working properly, you should be getting plenty of earphone volume on one salt-water cell. Adjust the antenna coil by setting the tuning condenser to a known station, then turn the knob on the ferrite core until the volume is at a peak.

Once the ferrite core is set for a certain antenna, the set should require no further adjustment. An on-off switch is not provided because the battery circuit breaks when you pull one of the phone plugs. Leaving the radio on will run the battery down after a few days, but the effect is not permanent. Clean the metal plates, replace the salt water and the battery is as good as new.