“You sunk my salvo!” doesn’t have quite the same ring to it. 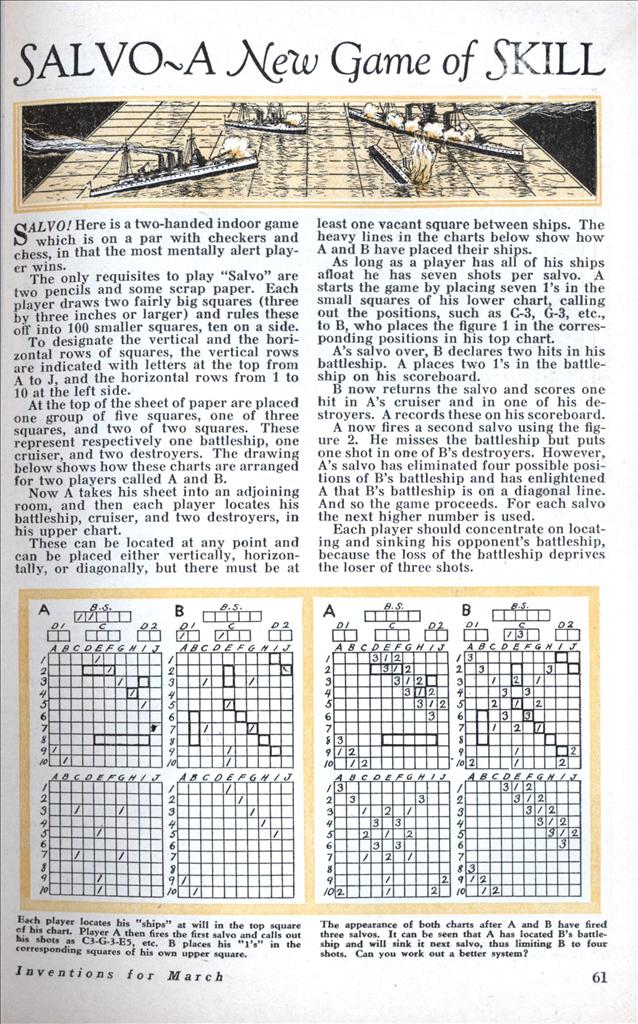 SALVO ~ A New Game of SKILL

SALVO! Here is a two-handed indoor game which is on a par with checkers and chess, in that the most mentally alert player wins.

The only requisites to play “Salvo” are two pencils and some scrap paper. Each player draws two fairly big squares (three by three inches or larger) and rules these off into 100 smaller squares, ten on a side.

At the top of the sheet of paper are placed one group of five squares, one of three squares, and two of two squares. These represent respectively one battleship, one cruiser, and two destroyers. The drawing below shows how these charts are arranged for two players called A and B.

Now A takes his sheet into an adjoining room, and then each player locates his battleship, cruiser, and two destroyers, in his upper chart.

These can be located at any point and can be placed either vertically, horizontally, or diagonally, but there must be at

least one vacant square between ships. The heavy lines in the charts below show how A and B have placed their ships.

As long as a player has all of his ships afloat he has seven shots per salvo. A starts the game by placing seven 1’s in the small squares of his lower chart, calling out the positions, such as C-3, G-3, etc., to B, who places the figure 1 in the corresponding positions in his top chart.

A’s salvo over, B declares two hits in his battleship. A places two 1’s in the battleship on his scoreboard.

B now returns the salvo and scores one hit in A’s cruiser and in one of his destroyers. A records these on his scoreboard.

A now fires a second salvo using the figure 2. He misses the battleship but puts one shot in one of B’s destroyers. However, A’s salvo has eliminated four possible positions of B’s battleship and has enlightened A that B’s battleship is on a diagonal line. And so the game proceeds. For each salvo the next higher number is used.

Each player should concentrate on locating and sinking his opponent’s battleship, because the loss of the battleship deprives the loser of three shots.