Remember: be nice to old people who look homeless, they might be rich! 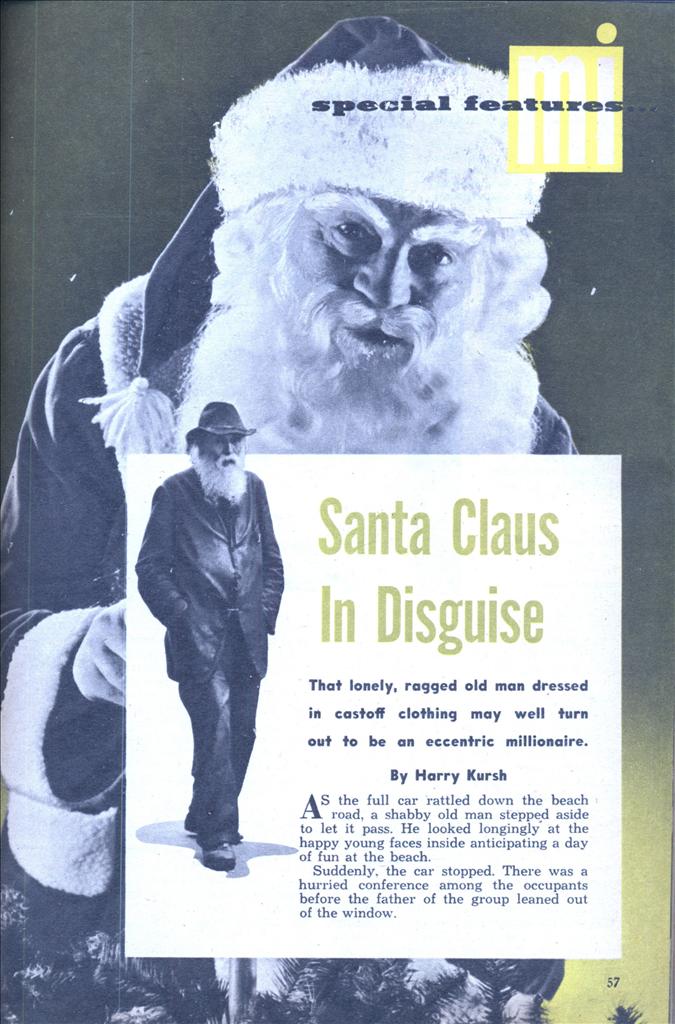 That lonely, ragged old man dressed in castoff clothing may well turn out to be an eccentric millionaire.

AS the full car rattled down the beach . road, a shabby old man stepped aside to let it pass. He looked longingly at the . happy young faces inside anticipating a day of fun at the beach.

Suddenly, the car stopped. There was a hurried conference among the occupants before the father of the group leaned out of the window.

“Sir,” he asked respectfully, “would you care to join our family at the beach? We have room.”

The old man was obviously taken aback at. this unexpected kindness. It was clear that such gestures were unknown to him.

Thirty years later that dirty old man, Charles Babonet, died in Los Angeles. Out of his half-million dollar fortune, he left $100,000 to the family that picked him up!

He hadn’t ever seen them after that fateful afternoon—in fact, he didn’t even know their name was Tyson. But he’d made a note of their ancient car—a Hayes—and took down the auto license number while they were swimming. So, it didn’t take very long to trace down the family. And when notified of their good fortune, they could remember the incident only vaguely.

You’ll never come into contact with a Santa Claus in disguise like Charles Babonet, you say? Well, chances are you’ve known many like him in your lifetime. Maybe you’ve seen him picking at piles of junk in your own hometown dumps. Or, you may have known him as that ragged old man who wore castoff clothing and lived a lonely life in a shack across the tracks. Or you may have seen him sitting alone in the square without a friend in the world.

More and more each year the records of social welfare agencies reveal astonishing stories of eccentric recluses, men and women who have secret wealth but for strange reasons of their own prefer to live as if they don’t have a cent.

For instance, what would you think if you saw a man like Patrick Foley who made his home in a decrepit flophouse in New York’s Bowery? In torn and tattered clothing, he was a familiar sight as a pushcart peddler along Bowery side streets. How could he possibly have any money?

Well, when Pat died recently at the age of 76, his will revealed that he had amassed . a fortune of $122,000. To four close relatives, Pat left 10 per cent each. But to a man who had befriended him—the man who had allowed him to live the way he wanted to live by supplying him with pins and needles for peddling—Pat left the balance of his secret wealth.

Recluses are not restricted to Bowery-type neighborhoods, either. In an elite suburb of Boston, snooty neighbors paid no attention to a 79-year-old spinster recluse who lived among them. But, when she died early last June a lot of eyebrows hit the sky. The “poor” spinster had left a million dollars. And in her will she asked that it be shared by three of her pet institutions and a handful of friends who had been kind to her.

Yet people usually avoid recluses, not only because most of them dress in rags, but because these retiring people invariably acquire strange habits. Take the case of Fred Nordenholz. In his tiny third-floor Kansas City apartment, Fred liked to collect all sorts of string and rope. Nobody knew why. In fact, nobody cared. He was” only a poor old recluse.

A few months ago, at the age of 80, he died. At first, all that could be found were 88 pennies, a can of rusty nails and miles of rope and string remnants. Officials were getting set to provide a pauper’s funeral for him when two bank employes discovered no less than $25,000 sewed inside the pockets of his familiar, ragged coat. Later, a will revealed that in death the old recluse was eager for friends. He stipulated that anyone attending his funeral should be compensated the amount of his daily wage.

Shortly after that, New York welfare authorities were arranging a Potter’s Field burial for a Bowery recluse who had died with nothing but a key in his pocket. No relatives, no friends could be traced. At the last minute, somebody suggested that i the key he left might fit a safe deposit box in some bank. And it did.

In the box that was finally located were four bank books with deposits which added up to a cash estate of $300,000!

Neighbors of recluses are often amazed at the huge amounts of cash found lying carelessly amid piles of odd furnishings and assortments of junk. In Philadelphia only two years ago, an elderly woman recluse lived in a dark, uninviting nine-room house in a once-fashionable section of town. She seldom left the house; no one had ever seen a visitor enter. One day a city fire official, out making a routine check, broke into the house when he grew tired of not finding anyone home for three weeks in a row.

The recluse was dead, but he had to plow through a small mountain of rubbish before he could find that out. At the edge of a five-foot mound of rubbish was the dead woman surrounded by old cereal boxes, a glass oil lamp, a rusty coffee pot and an old frying pan. Yet at her command in that pile of junk was a $200,000 fortune.

There’s more than enough evidence to prove that many recluses show an almost insane disregard for wealth. In Chicago, 79-year-old August Richter lived with his sister in a five-room flat. He seldom left his apartment—without friends, he had no reason to. He always paid his rent on time through a tiny opening in his door, handing over 15 crisp, new, one-dollar bills. When he died, what police found in his flat caused them to throw an immediate 24-hour guard around the building.

Spread all over the place was a total of $43,000 in cash and a key to a downtown safe deposit box which yielded an additional $105,300 in cash and securities.

In Jersey City, N. J., police last summer came upon one of the weirdest scenes ever unfolded in the growing list of strange-recluse cases. It all began when a real-estate agent called at the slovenly home of Clara and Marie Fafflock, elderly spinster sisters long known as recluses.

He knocked loudly several times but got no answer. Yet he knew that like typical recluses the sisters rarely left home. Suspicion aroused, he called for the police. They found Clara Fafflock sprawled out in bed, dead from stomach cancer and malnutrition. Unconscious on the floor, lay her sister, Marie, in critical condition due to undernourishment. Right next to them lay their household pet, a black raven, legendary symbol of death and disaster, dead from starvation!

Police found $23,940 scattered all over the house in envelopes, waste-paper baskets, a green metal box, an old billfold and , under Clara’s pillow. Seven bank books were turned up, with at least one showing deposits of more than $10,000.

But that wasn’t all! Next day police had to call in Treasury officials. They had dis- covered $38,085 in old bills and coins that hadn’t been minted in over a generation. This brought the cash find to more than $60,000. Chances are, however, it’ll take some time before the total fortune is figured, since one of the last things found in the house was a portfolio jammed with hundreds of property mortgages covering some of the choicest sites in nearby Hudson County.

Recluses don’t always live in run-down homes, though. Very often they just seem to be alone—no real friends, no known relatives—living quietly and harmlessly. Perhaps one of the most spectacular of all such cases was Mrs. Minnie Rosser Weigle, a 70-year-old resident of a modest New York hotel.

In the fall of 1946, she was found dead in her bathtub. There was a routine investigation and police wrote it off as the death of an old eccentric apparently due to heart attack. As far as the police were concerned, the matter ended there.

But not for a distant relative in the Army. He strongly suspected that his recluse relative was the quiet owner of a sizeable fortune and hired a lawyer to conduct a search. The apartment was sealed off and gone over inch by inch for nearly two months. Nothing was left unturned. But nothing showed up.

The search was called off and a porter came up to start the moving-out process. First thing he began to cart away was one of the recluse’s empty trunks. Just then the lawyer got a hunch. “Wait a minute!” he shouted. “Put that trunk down. We’re not through yet.” Then he put in a call for a trunk expert.

“This is an old-fashioned trunk,” explained expert Frank Schrader of the Airline Luggage Shop in New York, upon his arrival. “If there’s anything here it would probably be in a secret compartment which, in the old days, used to be built into the sides of drawers and not the bulging top.”

Schrader was right. He pulled out the top drawer, slid his hand along the right-hand side and broke into one of those I-told-you-so smiles as he withdrew a soft cloth bag.

One recent case stunned the entire world. The recluses involved were two brothers—an admiralty lawyer and an engineer. For 38 years they shared the same house in a once-fashionable section of New York. One day, they boarded up their windows and gradually stopped paying water, electric and gas bills. They cooked on a small kerosene stove and got water from a source four blocks away.

On the morning of March 21, 1947, one of the brothers, calling himself Charles Smith, phoned police headquarters.

“Please come to my house,” he pleaded, “there’s a dead body here.”

In a matter of minutes, police were at the house. It was a faded brick-and-brown-stone structure that looked as rotten outside as it was unkempt inside. But the doors were solidly locked and iron grilles shielded the windows. Police sent for reinforcements.

Soon the names of Homer and Langley Collyer blazed into banner headlines all over the world. For inside, police found the body of Homer Collyer. Later, under another pile of junk, they found Langley Collyer, killed by a booby trap he had set up himself as a protection against prowlers.

After taking days to sift through tons of junk—including such items as 14 pianos, the chassis of a Model T Ford, sewing machines, a 15,000-volume medical library, a pipe organ and even the jawbone of a horse —police found 34 bank books. A family lawyer said later that the Collyers had money in ”six figures.”

Suddenly, a whole horde of long-lost friends and relatives converged on the scene. All came exuding sympathy—but it was a little too late for them to show the kindness they had previously forgotten.

Is there a moral to these stories?

Obviously, everyone who shows compassion toward an eccentric old man or woman won’t be rewarded with a $100,000 legacy. Nor does he expect it. But even if the recluse doesn’t turn out to be that one-in-a-million Santa in disguise, a reward will still be there—in the wealth of satisfaction derived from helping a fellow human being. •