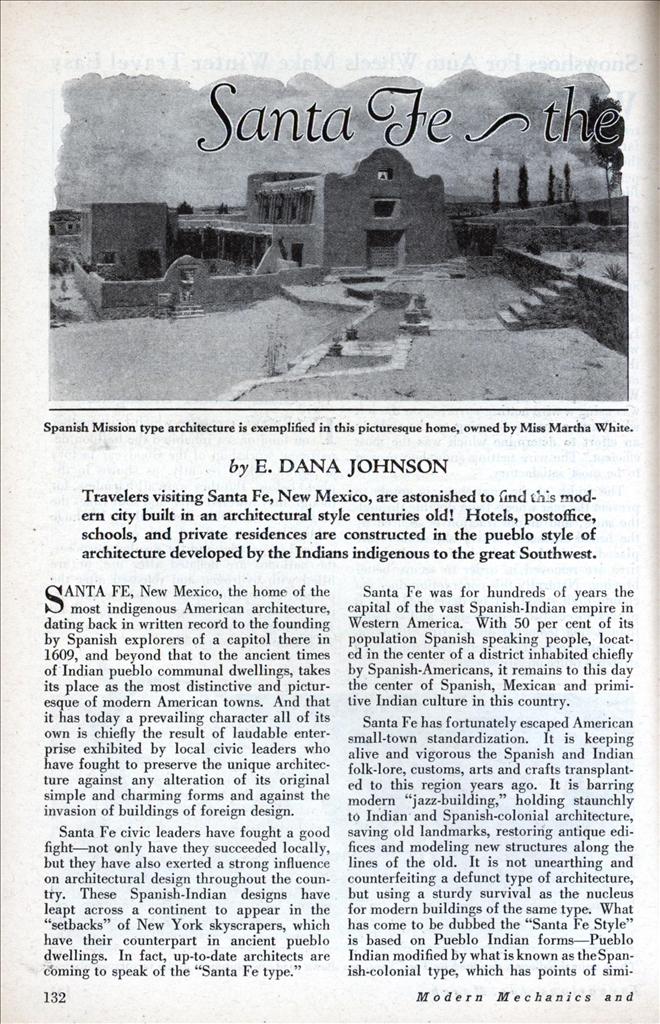 Travelers visiting Santa Fe, New Mexico, are astonished to find ibis modern city built in an architectural style centuries old! Hotels, postoffice, schools, and private residences are constructed in the pueblo style of architecture developed by the Indians indigenous to the great Southwest.

SANTA FE, New Mexico, the home of the most indigenous American architecture, dating back in written record to the founding by Spanish explorers of a capitol there in 1609, and beyond that to the ancient times of Indian pueblo communal dwellings, takes its place as the most distinctive and picturesque of modern American towns. And that it has today a prevailing character all of its own is chiefly the result of laudable enterprise exhibited by local civic leaders who have fought to preserve the unique architecture against any alteration of its original simple and charming forms and against the invasion of buildings of foreign design.

Santa Fe civic leaders have fought a good fight—not only have they succeeded locally, but they have also exerted a strong influence on architectural design throughout the country. These Spanish-Indian designs have leapt across a continent to appear in the “setbacks” of New York skyscrapers, which have their counterpart in ancient pueblo dwellings. In fact, up-to-date architects are coming to speak of the “Santa Fe type.”

Santa Fe was for hundreds of years the capital of the vast Spanish-Indian empire in Western America. With 50 per cent of its population Spanish speaking people, located in the center of a district inhabited chiefly by Spanish-Americans, it remains to this day the center of Spanish, Mexican and primitive Indian culture in this country.

Santa Fe has fortunately escaped American small-town standardization. It is keeping alive and vigorous the Spanish and Indian folk-lore, customs, arts and crafts transplanted to this region years ago. It is barring modern “jazz-building,” holding staunchly to Indian and Spanish-colonial architecture, saving old landmarks, restoring antique edifices and modeling new structures along the lines of the old. It is not unearthing and counterfeiting a defunct type of architecture, but using a sturdy survival as the nucleus for modern buildings of the same type. What has come to be dubbed the “Santa Fe Style” is based on Pueblo Indian forms—Pueblo Indian modified by what is known as the Spanish-colonial type, which has points of simi- larity with the English-colonial type of Eastern America. Continuation of these building designs in Santa Fe is made easy for the reason that dozens of Indian pueblos, unchanged for three centuries, lie close by, along with innumerable plazas, or villages, and haciendas, or farm-houses, of the Spanish speaking people in central and northern New Mexico. And in addition there are a great number of historical old buildings in the capital itself, centering around the plaza, partly modernized in the fashion of the nineties, facing along one whole side of the 300-year-old Palace of the Governor, which dates from the early seventeenth century.

Santa Fe now has 11,000 people, having doubled in population between 1920 and 1930. The greater part of the new buildings erected in that period have been constructed under the Indian-Spanish influence, and almost all of them been built with the utmost fidelity to the requirements of the model. Other attempts have strayed far from the pattern and have tried disastrously to combine modern “Jazz-plans” and ornamentation with the prototype. Fortunately, trial and error are gradually eliminating the failures and increasing the number of successes. Paradoxically, the chief difficulty in this renaissance lies in achieving simplicity; success lies in ability to restrain builders from adding inconsistent parts.

The most outstanding achievements in this building program are credited to more or less wealthy immigrants who have come to Santa Fe from eastern states, drawn by the beauty and picturesqueness of the city. These people have bought and restored or expanded century-old houses, incorporating ancient foundations or half ruined walls into new constructions, or have built rambling new dwellings which faithfully follow the ancient style.

The elasticity of the style when intelligently studied, provides adaptation to almost every kind of use. Without losing its character, it has been modified to meet the requirements of a federal post office building, blocks of business houses, filling stations, museums, sanitaria, schools, churches, municipal buildings, hospitals, state educational institutions, hotels, ranch resorts, theaters and garages. In short, it is suitable for almost “every modern need.

The prototype of the Santa Fe style evolved out of climatic and physical conditions, environment, and a quest for comfort, security and permanence in a dwelling place. The solid, massive Spanish mission churches of New Mexico, antedating those of California by two centuries, and entirely different, are exerting a strong influence on the renaissance.

The Santa Fe style has little in common either with the churrigueresque architecture of Mexico or the white, red-tile-roofed Spanish Californian, the latter being especially incongruous in this region, to which it never penetrated in early days. In turn, the attempts to transplant the New Mexican architectural tradition to the Pacific Coast or the East are likewise grotesque. Its ancestral home and proper setting is in New Mexico.

Essentially, the Santa Fe style goes back to the rudimentary proposition of building a house out of mud, stones, logs and sticks of wood. Coronado and Onate found the Pueblos, as now, using these materials — bricks of the native soil, sundried; for the roof, peeled pine and spruce trunks, laid crosswise from adobe wall to adobe wall, transected by smaller poles, thatched with sticks and covered with mud baked in the sun. The Indians found that these thick-walled, squat earthen cubicles kept out summer heat and winter cold. Built ordinarily around a square, with blank outside walls, they also served as a fortress against enemies, more effective when the walls rose two or more stories, with roofs stepped up from within the court. The upper stories were reached by rude wooden ladders. Floors, as today, were of dried mud, and the whole structure was plastered with adobe paste.

The Spaniards, coming on the scene, added “windows, wooden doors, raised adobe platform beds, corner fireplaces with raised hearths and squared chimneys, and to the exterior portales or porches with round wooden pillars surmounted by wooden corbels. And this is a picture of modern Pueblo building.

The buildings were marked by beautifully carved and painted doors and door-frames, window-frames, corbels, vigas, and railings, by carved wall cupboards, chests, chairs and tables, by candle sconces, chandeliers, mirror-frames and other fittings in tin, wood and iron, as well as handmade bed-covers or colchas, rugs and hangings. This same kind of equipment, consisting of old pieces, or new work done with the old genius by the native craftsmen, is entering into the furnishing of Santa Fe homes today. An organization called the Spanish-colonial Arts for some years past has conducted prize exhibitions and a permanent shop which have accelerated greatly the output of the Spanish-American weavers, carvers and metalworkers, renewing old-fashioned patterns and designs.

Flowing, molded lines characterize the Indian houses. Portales are flush with the walls, wooden rainspouts carry off the water, the ends of the round vigas or roof-timbers stick out of the plastered adobe wall just below the housetop. The pillars and corbels are still somewhat primitive.

The Spanish-colonial house of the later period is more angular, the beam-ends no longer protruding. There are wooden, brick or flagstone floors in corridor, portal or patio, the porch is deep and inviting, and there are many-paned windows. The large square nine-paned sashes familiar in eastern colonial houses are numerous.

Between the severely simple adobe residence of the Pueblo type and the more spacious, stately and ornamented Spanish-colonial home, lie intermediate types, examples of which may be found all through the region. Within this range, however, all the elements remain simple. Lintels plastered over become ornamentation when they are left bare. Beams for the ceiling may be plain round tree-boles, or, as in the case of the mission churches, they may be squared and carved and rest on exquisitely carved corbels projecting from the walls. Herring-bone thatching in the ceiling becomes highly decorative, but nothing is done without some relation to utility and structure—nothing tacked on or made superfluous.

Adhering to these simple rules, the individual builder nevertheless finds endless opportunity for modification, when constructing a house after his own taste. He is not limited as to the shape or size or relation of rooms, height of ceilings, number or location of fireplaces, and the style lends itself to any kind of terrain, flat or sloping. Indian and Spanish houses cling to the ground and climb over it. Various roofing materials can be used, and if one desires, brick or hollow tile can be camouflaged as adobe. Glaring colors are taboo. While the Santa Fe style building program has not been 100 per cent, the general aspect of Santa Fe displays masses or tiers of flat-roofed, earth-colored houses, one to two or three receding stories in height. One hotel has managed a set-back from one to five stories without being obtrusive.

The community movement imposes no restrictions on interior treatment and Santa Fe homes vary in furnishings and decoration according to the ideas of their owners.