I was very disappointed to learn that the rifle on the second page is not actually a toy. 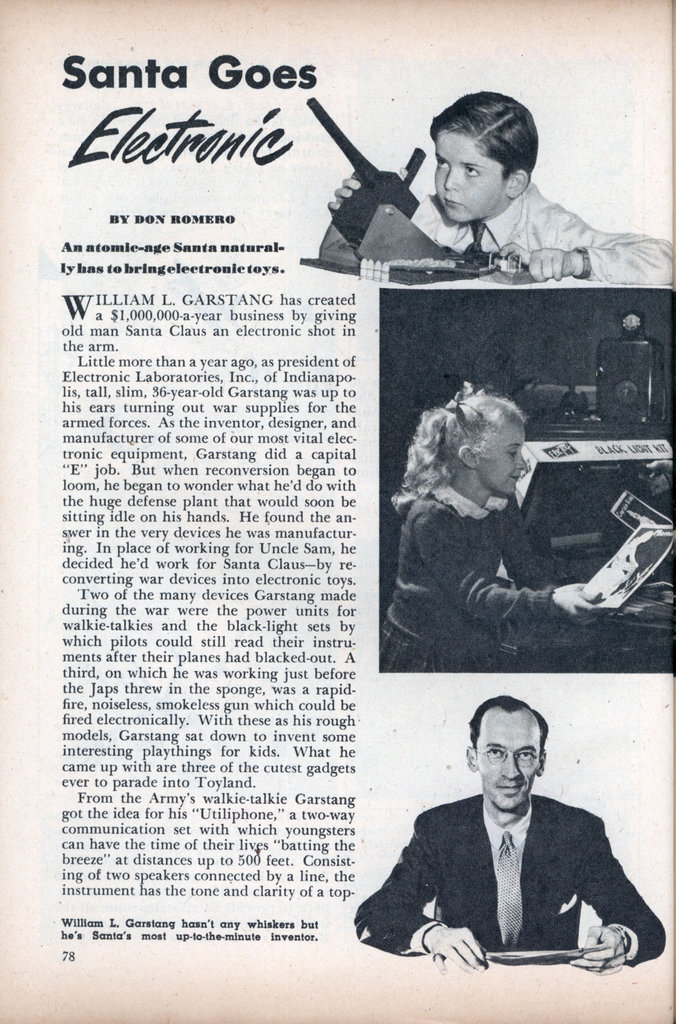 An atomic-age Santa naturally has to bring electronic toys.

WILLIAM L. GARSTANG has created a $l,000,000-a-year business by giving old man Santa Claus an electronic shot in the arm.

Little more than a year ago, as president of Electronic Laboratories, Inc., of Indianapolis, tall, slim, 36-year-old Garstang was up to his ears turning out war supplies for the armed forces. As the inventor, designer, and manufacturer of some of our most vital electronic equipment, Garstang did a capital “E” job. But when reconversion began to loom, he began to wonder what he’d do with the huge defense plant that would soon be sitting idle on his hands. He found the answer in the very devices he was manufacturing. In place of working for Uncle Sam, he decided he’d work for Santa Clausâ€”by reconverting war devices into electronic toys.

Two of the many devices Garstang made during the war were the power units for walkie-talkies and the black-light sets by which pilots could still read their instruments after their planes had blacked-out. A third, on which he was working just before the Japs threw in the sponge, was a rapid-fire, noiseless, smokeless gun which could be fired electronically. With these as his rough-models, Garstang sat down to invent some interesting playthings for kids. What he

came up with are three of the cutest gadgets ever to parade into Toyland.

From the Army’s walkie-talkie Garstang got the idea for his “Utiliphone,” a two-way communication set with which youngsters can have the time of their lives “batting the breeze” at distances up to 500 feet. Consisting of two speakers connected by a line, the instrument has the tone and clarity of a top-

notch radio, and is so sensitive that a user can stand 10 feet away from a speaker and still be heard at the other end of the line.

The Utiliphone is durable and portable. It operates on household current, and is equipped with controls by which either speaker can be turned on or off at will. From the black-light sets he made for planes, Garstang has come up with another interesting toyâ€”a black-light painting kit which, in addition to being

extremely instructive, is also a whale of a lot of fun. The kit consists of a black-light lamp, a few paint brushes, a variety of fluorescent paints and crayons, and a “shadow box.” Working inside the shadow box, which opens up to form a tiny, semi-dark workshop, the child makes a drawing with the paints or crayons. When he’s finally finished, he turns on the black-light lampâ€”and instantly his drawing springs to life in glowing fluorescent colors.

Like most of Garstang’s creations his black-light set is proving itself to be more than just a toy. Elementary school teachers, for instance, have found it an excellent means of cultivating the drawing talents of young pupils. And in Army psychiatric wards -where battle-shocked veterans sit staring vacantly into space day after day, the glowing colors of these sets seems to have a peculiar power to catch their attention and gradually rekindle their interest in doing something with their hands.

From the gun which he was tinkering with at the end of the war, Garstang has come up with a toy cannon which should just about blow the top off any kid’s Christmas. Modeled somewhat after the Army’s famous 133-mm. “Long Tom,” the cannon is mounted on wheels, has a movable barrel, recoils like a real gun, and has a magazine which holds nine wooden shells that can be hurled a distance of 30 feet in rapid-fire fashion. The gun operates on 110-volt AC current and is fired by means of a push-button which is attached to it by an electric cord. It hurls shells a good distance, but it has no more force than a small popgun.

In devising his next toy Garstang turned his back on war and went searching in the field of sport for a man-sized game which he could electronically whittle down to small-child size. He found it in bowling. The result is his “Buzz-Ball” game. It consists of a small metal ball suspended by a string over a board on which stand a number of small ten-pins. Beneath the board is an electronic magnetic device which is operated by two push-buttons, one for the hand of each of the two opposing players. By pushing his button, a player can set the ball to swinging and can direct the angle of its swing so as to knock down his opponent’s pins. The opposing player, however, by pressing his button, can partially counteract the magnetic pull the first player is exerting on the ball, and can, in turn, redirect the swing of the ball so as to knock down the first player’s pins. The trick, of, course, lies in magnetizing the ball at just the right point in its swing. In addition to bowling, the board has been designed so that eight other games, including a word game, a card game, and a baseball game, can also be played. Because it involves skill, split-second timing, and the ability to bluff your opponent as to just when you are going to push your button, Buzz-Ball becomes a last, tricky game which invariably works both young and adult players up into a fever pitch of competition.

In his latest creation, Garstang has produced a tiny electronic organ which, while possessing a keyboard of only two octaves, las the tone, clarity and accuracy of pitch of a full-sized console. Although still in process of being perfected, toy “critics” have prophesied that it will find its great-, est market with music schools and professional bands and orchestras. Garstang wants to keep it a toy, however, and is redesigning it for that purpose.

Garstang’s swift rise to his present position as the new wizard of electronic toys for children began not very long after he stopped being a child himself. Graduating from college when he was still barely 20, he got himself a job as a radio technician and promptly invented the dry electrolytic condenser which is used, in all radio sets today. A year later he was working as an electronic consultant. Two years later he and a friend each put up $500 and started Electronic Laboratories in a tiny building which had formerly been a garage, a church, and a jail.

When the Japs hit Pearl Harbor their tiny building blossomed into five huge plants and two enomous warehouses. For the next few years they worked day and night turning out such war devices as igniters for flame throwers, power megaphones for landing craft, portable beacons for airports, and friend-or-foe recognition lights for planes and tanks.

In the last 15 years Garstang has run up a total of about 50 inventions. It was he who created Monopoly, one of the most popular games ever to appear before the public. Three of the many devices which he created for the armed forces, and which are now being adapted for use by a number of law-enforcement agencies, are the Sniperscope, the Snooperscope, and the Metascope. The first was an infra-red spotlight which, attached to a Garand rifle, enabled our GI’s to pick off Japs attempting to infiltrate the American lines under cover of darkness. During the first seven days on Okinawa, Sniper-scopes alone accounted for over 30 percent of the Japs’ casualties. Similar to the Sniperscope is the Snooperscope, an infra-red lamp which is used primarily for patrolling dark areas and for signalling at night. And kid brother to both is the tiny Metascope, a hand-size instrument which is used for picking up beams of infra-red light.

Essentially a “shop man” who finds it uncomfortable being a big-business executive, Garstang can almost always find an excuse to duck out of a Board of Directors’ meeting and scurry off to a private workshop where he can tinker to his heart’s delight. The people who have been privileged to visit his private laboratory report that if only a traction of the devices incubating there ever come to light, old Santa will have to turn in his sleigh for a 10-ton truck.