Popular Science
Issue: Aug, 1931
Posted in: Architecture
5 Comments on SCHOOLHOUSE OF FUTURE TO BE LARGELY OF GLASS (Aug, 1931)

SCHOOLHOUSE OF FUTURE TO BE LARGELY OF GLASS (Aug, 1931) 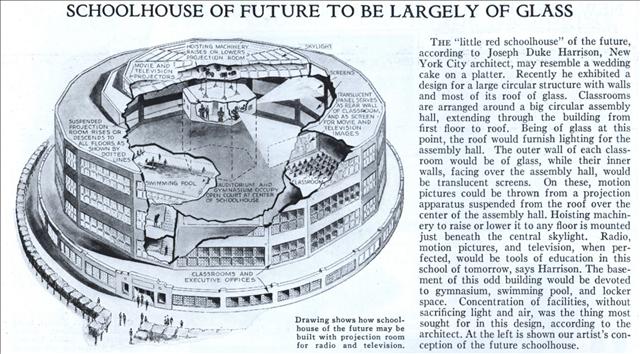 SCHOOLHOUSE OF FUTURE TO BE LARGELY OF GLASS
The “little reel schoolhouse” of the future, according to Joseph Duke Harrison, New York City architect, may resemble a wedding cake on a platter. Recently he exhibited a design for a large circular structure with walls and most of its roof of glass. Classrooms are arranged around a big circular assembly hall, extending through the building from first floor to roof. Being of glass at this point, the roof would furnish lighting for the assembly hall. The outer wall of each classroom would be of glass, while their inner walls, facing over the assembly hall, would be translucent screens. On these, motion pictures could be thrown from a projection apparatus suspended from the roof over the center of the assembly hall. Hoisting machinery to raise or lower it to any floor is mounted just beneath the central skylight. Radio, motion pictures, and television, when perfected, would be tools of education in this school of tomorrow, says Harrison. The basement of this odd building would be devoted to gymnasium, swimming pool, and locker space. Concentration of facilities, without sacrificing light and air, was the thing most sought for in this design, according to the architect. At the left is shown our artist’s conception of the future schoolhouse.