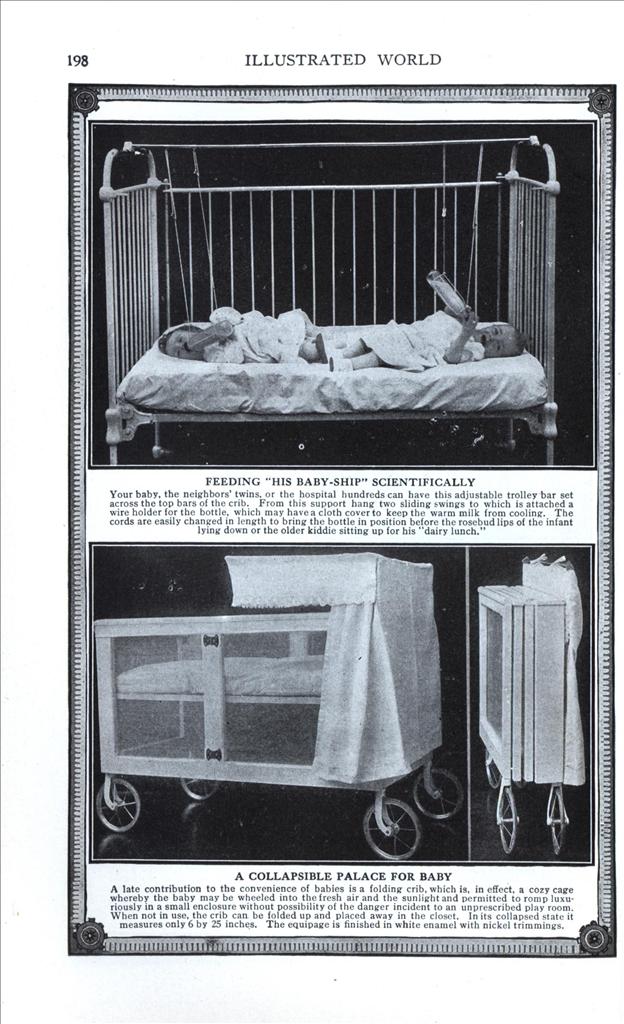 This dual purpose machine is the recent offering of a Minnesota inventor, and is now being used by the city of Minneapolis. The diagonally arranged scraper or plow blade may be raised or lowered by the hand levers. It also may be tilted to a slanting position for working on the side of an arched roadway. The improved supporting frame by which the scraper is pivotally supported in proper position when the machine frame is tilted prevents breakage of the parts.

The latest and most unusual construction in tractors is being operated at Grand Rapids, Michigan, by the inventors, Frederick K. Burch and Joseph West. It is designed for use over snow and ice and, in substance, is a rotary skate with powerful propulsion. The frame of the tractor is mounted on two drums, right and left, bisected transversely, and set on a heavy shafting. The drums are made of sheet iron, over a basswood frame, on which are set numerous pieces of channel iron. The left-hand drum rotates clockwise and the right-hand drum, counter-clockwise, thus neutralizing the power along the line of progression. One single runner in front, connected by steel cable through pulleys to the wheel, makes accurate steering possible.

FLUSHING WITH A TRAIN OF CARS

A train of cars, or carriages, flushes the streets of Buffalo and keeps the asphalt spotlessly clean. When the new device is being hauled up the street to a new location it looks the part of the fabled sea serpent, but it is in reality the most efficient means yet invented for scrubbing on a large scale. It is a means for moving the curb hydrants into almost any desired position, by means of an I attachable steel pipe line with many nozzles.

A Time-Clock for Machines

Factory machines can no longer loaf on the job, now that a mechanical “time-clock” has been perfected to record their operation. When a certain machine down in the factory is ‘ started up a calorite wire in the time-clock is heated to the scorching point by electricity, and a line starts instantly on the paper roll. When the circuit is broken by the stopping of the machine, the wire cools and the line ceases to be. Breaks of even one minute duration are read easily by the time keeper. As many “pens” can be used as desired, as the clock will easily keep tabs on a large factory of 375 machines. Only one small wire runs from the machine to the clock, all having a common return. With this little clock the superintendent can see at glance just how many machines are running in the plant. If a machine does not earn its “keep” it is easily detected and “fired”. Incidentally, it also prevents the machine operator from taking a rest during the working day!

A calendar attachment for clocks has been invented by William W. Bass, of Willernie, Minnesota. Each day the calendar is turned forward automatically by the clock so that the correct date always appears through a side opening in the lower portion of the clock. The calendar is contained on an endless roll run over two drums and operated by a ratchet mechanism, which in turn is operated by the hands of the clock. The indicating web bearing the calendar is successively shifted at the end of each twenty-four hour period. Once each year the calendar must be adjusted to provide for the odd or three hundred and sixty-fifth day.

Whole milk is getting far too valuable to use as cattle feed, so Purdue University is conducting a series of experiments to determine the effect of skimmed milk and milk substitutes. It’s easy to weigh the calves, but measuring their growth is quite another proposition. In order to accomplish this, the unruly little beasts are driven before this ruled board weekly, and photographed.

These New York City swine are rapidly living down the reputation that centuries have bestowed upon them. Instead of living in stinking sties, they have clean, comfortable quarters, and spend a great deal of their time cleaning their pink-white skins in this shower bath.

A Substitute for Metal Lath

A New Jersey inventor lately has put this cement wall board on the market. The device consists of a board or body member grouped with other boards, each being provided with anchor holes. The boards of one group are arranged in staggered relation to the boards of another group. It can be put on, and finished by spreading cement upon it, all from a swinging scaffold.

A novel device for painting golf balls has been invented by George H. Lambert of Asheville, North Carolina. The golf ball is slipped into place between wires projecting upward from the cover of the device. This cover then is inverted and the golf ball is dipped into the can of white paint. Then the cover is reversed and any excess paint drops down on to the cover and flows through an opening at its sloping central portion, to the paint can. The painting is done quickly and the hands are not soiled when this method is used.

Your baby, the neighbors’ twins, or the hospital hundreds can have this adjustable trolley bar set across the top bars of the crib. From this support hang two sliding swings to which is attached a wire holder for the bottle, which may have a cloth cover to keep the warm milk from cooling. The cords are easily changed in length to bring the bottle in position before the rosebud lips of the infant lying down or the older kiddie sitting up for his “dairy lunch.”

A COLLAPSIBLE PALACE FOR BABY

A late contribution to the convenience of babies is a folding crib, which is, in effect, a cozy cage whereby the baby may be wheeled into the fresh air and the sunlight and permitted to romp luxuriously in a small enclosure without possibility of the danger incident to an unprescribed play room. When not in use, the crib can be folded up and placed away in the closet. In its collapsed state it measures only 6 by 25 inches. The equipage is finished in white enamel with nickel trimmings.

This mill does not crush the bean as so many of the hand propelled machines do, but cuts it with tempered steel knives, to the proper size to get the best flavor. It is really an ornament to the kitchen. The size is thirteen inches by seven inches; it is made of white brass with nickel plate over it. It is simply attached in a convenient position on the kitchen wall anywhere within reach of the electric light socket and by the mere pressing of the switch the coffee is ground while other work is being attended to.

No longer need the day for laundering the “wig” be dependent upon warm days or even sunshiny ones. With this sheet metal elbow-shaped chimney placed over a burner of the gas range, the owner of wet locks can stand or sit comfortably before the warm blast of air and dry her “golden glory” or her “raven tresses” thoroughly in a few minutes. The dryer weighs only six pounds, is absolutely sanitary and will last until long after there are “silver threads among the gold.” It can serve also with an oil or gasoline stove.

The machine shown in the picture consists of a band saw operating over two narrow wheels, being driven by a small gasoline engine, the whole located on a movable platform. The machine thus is pulled from one stump to the next. The band saw swings on a pivot and is forced through a stump so rapidly that it is possible to cut off a three foot stump level with the ground in two or three minutes.

A MACHINE THAT CATCHES BOLL-WEEVILS Mounted on two wheels and pulled by one animal which walks between the furrows, this machine is designed to straddle the cotton row. The cotton stalk passes through a slit in the bottom of the machine, and thus inclosed between its sides, is agitated vigorously by a fan, which is moved by a cog arrangement. All insects, as well as the infected squares, are disengaged, and striking, of necessity, the sloping walls, fall into receptacles at the bottom of each wall. These receptacles contain kerosene oil, which kills the insects, and renders infected squares inflammable, so that they are burned easily when receptacles are full.

A clever contrivance has been patented which will permit an amateur photographer to change plates or develop exposed plates without using a dark room. The device is constructed in the shape of a large square. The sides fold up and the top and bottom sections are light-tight trays which fit over the sides when ready for use. An opening in front of the box contains a sheet of ruby glass which allows the entrance of enough light to discern all necessary movements. A curtain on the inside of the box regulates the light passing through the ruby glass. A peep hole is placed on the top section of the box toward the rear and is protected by an eye shade which is hinged so as to allow its being folded up flat on the top of the box.

PICTURING THE VOICES OF OPERA STARS

Delegates to the Congress of Scientists saw the voices of Caruso, Tetrazzini. and Amato dance before their eyes on the wall of a darkened room. The phonodeik—the device is shown above—consists of a supersensitive diaphragm of a gauze-like material, through which the sound waves pass, causing vibration. A series of highly polished mirrors reflects the vibrations to a revolving triangular mirror disc, which in turn reflects them upon a screen. The sound wave reflections appear upon the screen magnified 40,000 times the size of the vibrations upon the diaphragm. Caruso’s voice is pictured through the phonodeik, varied from a clearly outlined curved line to a shadowy blue as his voice rises from a low, natural note to a high burst of volume. The voice of Tetrazzini was as different from Caruso’s as day from night. The voices of four opera stars are charted on the wall back of the machine.