Mechanix Illustrated
Issue: May, 1954
Posted in: Movies
No Comments on Science Creates a Monster (May, 1954) 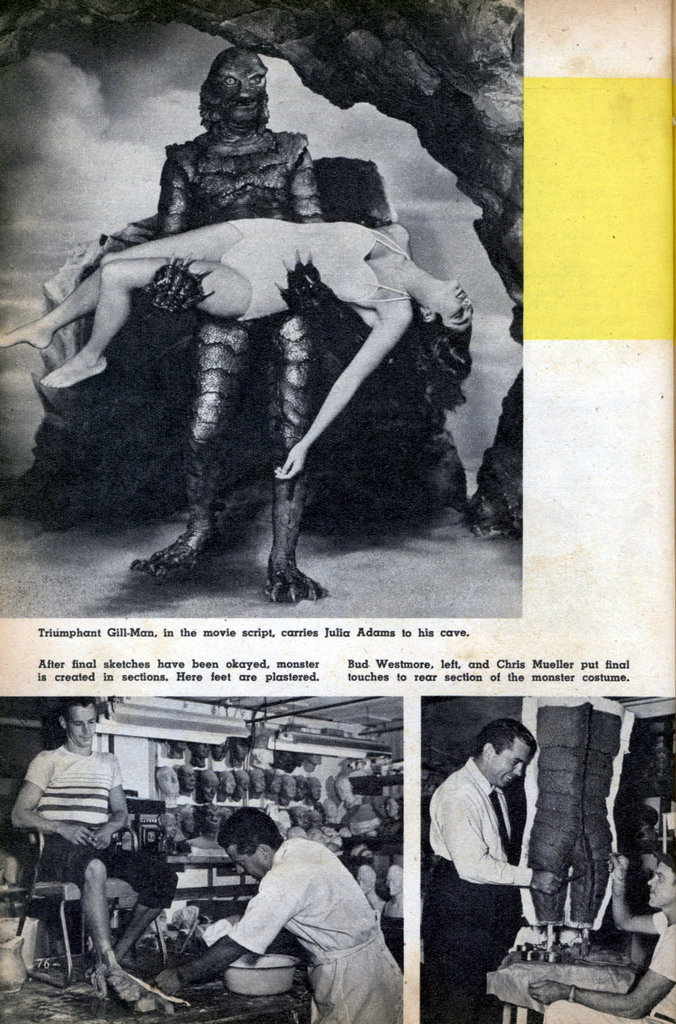 This is the monster from The Creature from the Black Lagoon. It’s 50th anniversary site is here.

Thanks to Stannous for the tip about the anniversary site.

Hollywood has produced some weird costumes but this $18,000 horror-suit tops them all. By Harvey B. Janes

AN ominous order rang through the studios of Universal-International pictures recently: “Gill-Manâ€”report to the underwater tank to test your three heads!”

Accordingly a horrible monster, half man and half fish, lumbered menacingly across the lot, stopped at the huge water tank, poised for an instant and then plunged into the murky depths.

To the casual observer it might have seemed as though the studio was being attacked by a frightful sub-human creature from out of the past but the camera and set crews, producer, directors, actors and script girls all held their ground bravely. Were they too frightened to move? Or did they all know it was a trained monster?

But if that were the case, where had it come from in the first place?

Actually the answer to all these questions is a bit simpler, and certainly less mind-shattering than you might imagine.

The Gill-Man is an ingenious and complicated costume created after eight-and-a-half months’ research by Universal-International makeup chief Bud Westmore and his staff. And the creature who lumbered around the lot dressed in this foam-rubber horror is an ex-Marine named Ben Chapman who plays the part of the Gill-Man in the new film, Creature From The Black Lagoon, a science-fiction thriller in 3-D.

The story deals with the search for a primitive gill-man, believed to be a living link with the dawn of time. When a claw is found near a lagoon in the jungles of South America, a group of scientists forms an expedition to see if they can find the rest of the remains. They are never able to locate the missing skeleton but they find a live specimen instead. It is no happy discovery, however, because the beast turns out to be so ferocious that they consider themselves quite lucky to get away with their lives.

The monster costume used for the title role in this film turned out to be the most involved and expensive horror-attire ever devised for a motion picture. When all the designing, modeling and experimentation had been completed, the total cost ran to $18,000.

Original designs for the weird costume were drawn by Milicent Patrick, a statuesque Hollywood beauty who is both artist and actress rolled up into one. After working for a while for Walt Disney as the first girl animator in history, she was hired to create monsters for Bud Westmore at Universal-International. Some of her horrifying handiwork has appeared in It Came From Outer Space, This Island Earth and Sign Of The Pagan. The Gill-Man is her masterpiece, however. She had to change his shape 76 times before he finally was approved and now, no matter how he scares people, she still thinks he’s cute.

But actual designs were just the first step. Once Bud Westmore and Jack Kevan, the well-known makeup artist, got hold of the sketches it was their problem to actually create the monster. In the first place, the costume had to be completely waterproof since most of the action involving the Gill-Man would take place under water. Then too, it had to be light and flexible enough so that the actor could move easily and with realism in his part. For these reasons it was decided that rubber was the most practical and workable material to use.

They made plaster-of-Paris molds of the actor, dividing this job into sections so that the head, arms, legs, hands, feet, front and back of the torso could be formed separately.

Even with the plaster molds, however, their task was a difficult one. For while they did have a pretty good idea of what their monster was supposed to look like, it was another thing to produce the various parts of the costume separately and still keep them realistic enough and workable at the same time. The webbed feet and hands, for instance, had to be made with special controls so that they would actually aid Chapman in his underwater swimming instead of weighing him down. And the head had to be horrible and prehistoric-looking but pliable enough to show facial expression and allow breathing, and also be watertight. In all, 32 different head models were made before one was finally accepted. Almost 200 lbs. of foam rubber were used in experimental stages before the Gill-Man suit was completed.

The end result of this prodigious labor was one of the most frightening costumes ever to appear on a movie screen. Complete with gills, fins, scales and huge claws, it stands ready and able to scare every youngster in the country, and most adults, out of 15 years growth. It’s an underwater Frankenstein in 3-D.

And there’s more than one of these monsters, too.

Chapman’s role in the picture was so strenuous that duplicate costumes had to be made â€” thus the order for him to come to the studio pool to test his three heads.

But while the Gill-Man may well prove to be the number one movie monster, he was just another actor to the guys and gals on the movie set. All the gals, that is, with the exception of Julia Adams, the only female in the picture. During the filming of a scene in which she was being abducted by the Gill-Man, Julia had her pretty head smacked against a rock when her over-anxious captor cut a corner too sharply while carrying her through an underwater cavern. She was knocked unconscious but the monster didn’t realize his own strength so he just kept walking and the cameras kept right on grinding. In fact no one noticed the damage at all until the whole scene had been filmed. Then Miss Adams was rushed to the studio hospital where she was treated for a minor concussion and skin abrasions. She recovered in a few days but from that point on the monster was treated with much more respect and care.