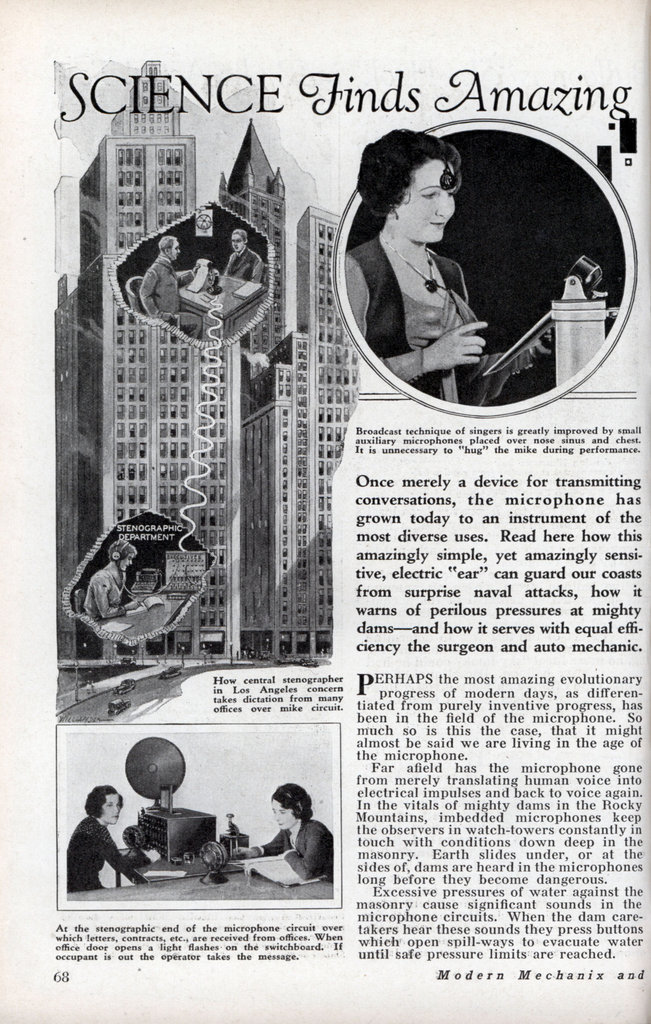 Once merely a device for transmitting conversations, the microphone has grown today to an instrument of the most diverse uses. Read here how this amazingly simple, yet amazingly sensitive, electric “ear” can guard our coasts from surprise naval attacks, how it warns of perilous pressures at mighty damsâ€”and how it serves with equal efficiency the surgeon and auto mechanic.

PERHAPS the most amazing evolutionary progress of modern days, as differentiated from purely inventive progress, has been in the field of the microphone. So much so is this the case, that it might almost be said we are living in the age of the microphone.

Far afield has the microphone gone from merely translating human voice into electrical impulses and back to voice again. In the vitals of mighty dams in the Rocky Mountains, imbedded microphones keep the observers in watch-towers constantly in touch with conditions down deep in the masonry. Earth slides under, or at the sides of, dams are heard in the microphones long before they become dangerous.

Excessive pressures of water against the masonry cause significant sounds in the microphone circuits. When the dam caretakers hear these sounds they press buttons which open spill-ways to evacuate water until safe pressure limits are reached.

In the surgical wards of a great hospital, surgeons and nurses bend tensely over an abdominal operation. Instead of the measured voice of the nurse calling off the condition of the heart, often distracting the attention of the chief surgeon, a pulse of low, soft sound spreads through the whole room. It is the sound of the heart itself, beating over a microphonic circuit.

If it slows dangerously, or otherwise weakens, the surgeon takes appropriate steps to restore it to normal. Thus he is not suddenly obliged to stop his careful work at a dangerous point. Instinctively, he listens to the beat as he proceeds with his work, guiding his work according to the heart’s condition. The sound of the heart could be amplified until it churned with the roar of Niagara. This, however, is never done, unless by internes or scientists experimenting with healthy persons.

Indeed, the day is not far distant when the doctor will entirely dispense with his stethoscope, so long the badge of the medical profession, and simply place a microphone over the patient’s heart and listen very comfortably for any significant sounds. For the examination of lungs, too, the microphone is proving an ideal instrument. All meaningful sounds can be picked up and accurately classified.

Plans have been prepared, in event of war, to place a first-line net of microphones all along the coasts, so that trained men ashore may read the sounds of all ships passing. With knowledge of where our own ships are cruising, we thus can tell whether or not enemy vessels are approaching our shores. Heavy ships, capable of carrying long-range guns, can always be thus announced long before their guns come within range of our shore, and appropriate measures taken to resist them.

The microphone thus eliminates thousands of scout vessels which would otherwise be necessary. The value of this expedient to a nation with a long coast line, such as our own, is manifest.

The new condenser and carbon type microphones, highly refined for use in the talkies and in modern radio transmission, have made possible truly amazing applications to many phases of modern life.

Ships at sea are now being equipped with a thermostat and a microphone in every compartment that lies along the keel and hull. If fire breaks out, the thermostat reports it automatically to the officers on the bridge. If the hull is injured and water begins pouring in, the microphone reports the noise loudly on the bridge. Thus ship’s officers know the condition of every compartment at all times. Any leak big enough to endanger the ship, conveys a significant microphonic sound to the bridge.

In future war, sapping and mining operations will be prevented by alert microphones buried in the earth, which will report all sounds of military digging.

Thanks to the “mike,” large concerns can speed up their stenographic departments. In a Los Angeles office building, a central stenographer takes dictation from many offices over a microphone circuit. A red light gleams if a door in one of the offices she serves is opened. If the man is out, she, many floors below, calls over the microphone, “Mr. Simmons is out; he will return at 3 o’clock. Will you wait, or shall I tell him you called?” The visitor speaks into the microphone and expresses his wishes. Thus one receptionist serves many offices.

We are familiar with the use of the microphone in automotive mechanics. Microphones placed alongside, or even inside, engines, report by sound to the expert automotive worker just what condition the engine is in.

Other microphones, placed at mechanical apparatus in factories, report to superintendents the activity of the machinery.

In California oil fields which have, been sealed in accordance with the new regulations governing conservation of oil, the movements of the oil deep in the earth are reported by microphone. If an adjacent field, lower in level, has not been closed in accordance with the regulations voluntarily accepted by the companies, the flow of oil to the field which is cheating can actually be heard over the microphone.

The new condenser microphone, operating over a dural diaphragm placed in front of a gas chamber, was considered the finest microphonic development, until good old carbon again came to the fore with improvements in its design. The two types are now running nip and tuck. The carbon, carefully selected granules of anthracite coal, is placed, like the gas chamber of the condenser microphone, behind a gold-plated dural diaphragm.