Science And Mechanics
Issue: Jan, 1934
Posted in: General
Tags: letters to the editor
No Comments on SCIENCE FORUM (Jan, 1934) 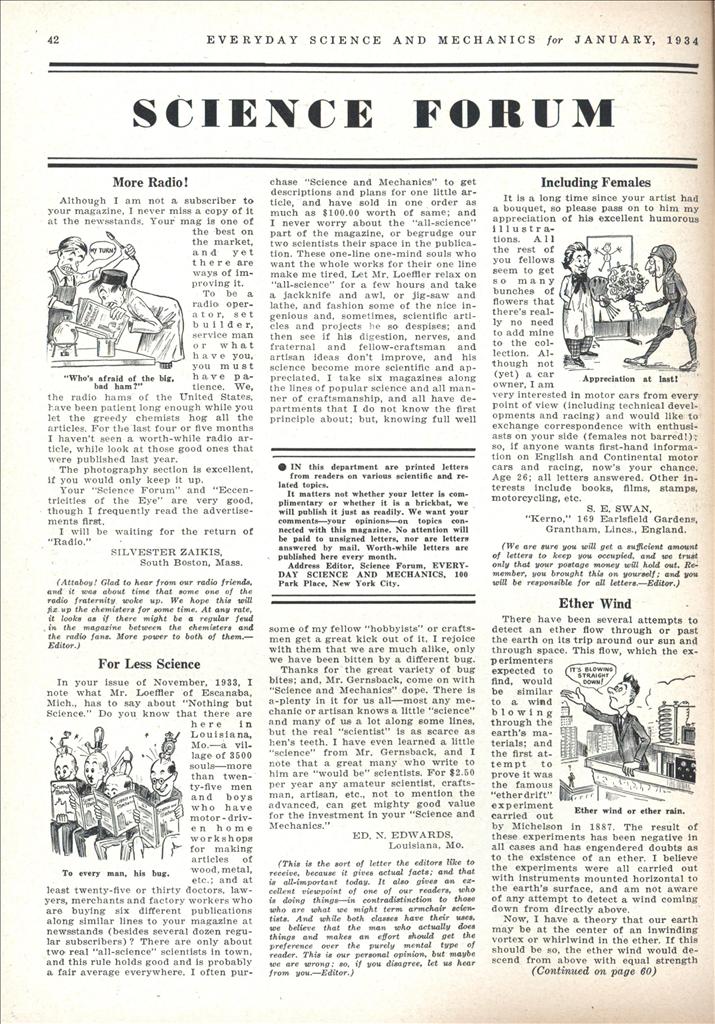 IN this department are printed letters from readers on various scientific and related topics.

It matters not whether your letter is complimentary or whether it is a brickbat, we will publish it just as readily. We want your comments—your opinions—on topics connected with this magazine. No attention will be paid to unsigned letters, nor are letters answered by mail. Worth-while letters are published here every month.

Although I am not a subscriber to your magazine, I never miss a copy of it at the newsstands. Your mag is one of the best on the market, and yet there are ways of improving it.

To be a radio operator, set builder, service man , or what have you, you must have patience, We, the radio hams of the United States, have been patient long enough while you let the greedy chemists hog all the articles. For the last four or five months I haven’t seen a worth-while radio article, while look at those good ones that were published last year.

The photography section is excellent, if you would only keep it up.

Your “Science Forum” and “Eccentricities of the Eye” are very good, though I frequently read the advertisements first.

I will be waiting for the return of “Radio.”

(Attaboy! Glad to hear from our radio friends, and it was about time that some one of the radio fraternity woke up. We hope this will fix up the chemisters for some time. At any rate, it looks as if there might be a regular feud in the magazine between the chemisters and the radio fans. More power to both of them.— Editor.)

In your issue of November, 1933, I note what Mr. Loeffler of Escanaba, Mich., has to say about “Nothing but Science.” Do you know that there are here in Louisiana, Mo.—a village of 3500 souls—more than twenty-five men and boys who have motor-driven home workshops for making articles of wood, metal, etc.; and at least twenty-five or thirty doctors, lawyers, merchants and factory workers who are buying six different publications along similar lines to your magazine at newsstands (besides several dozen regular subscribers) ? There are only about two> real “all-science” scientists in town, and this rule holds good and is probably a fair average everywhere. I often purchase “Science and Mechanics” to get descriptions and plans for one little article, and have sold in one order as much as $100.00 worth of same; and I never worry about the “all-science” part of the magazine, or begrudge our two scientists their space in the publication. These one-line one-mind souls who want the whole works for their one line make me tired. Let Mr. Loeffler relax on “all-science” for a few hours and take a jackknife and awl, or jig-saw and lathe, and fashion some of the nice ingenious and, sometimes, scientific articles and projects he so despises; and then see if his digestion, nerves, and fraternal and fellow-craftsman and artisan ideas don’t improve, and his science become more scientific and appreciated. I take six magazines along the lines of popular science and all manner of craftsmanship, and all have departments that I do not know the first principle about; but, knowing full well some of my fellow “hobbyists” or craftsmen get a great kick out of it, I rejoice with them that we are much alike, only we have been bitten by a different bug.

Thanks for the great variety of bug bites; and, Mr. Gernsback, come on with “Science and Mechanics” dope. There is a-plenty in it for us all—most any mechanic or artisan knows a little “science” and many of us a lot along some lines, but the real “scientist” is as scarce as hen’s teeth. I have even learned a little “science” from Mr. Gernsback, and I note that a great many who write to him are “would be” scientists. For $2.50 per year any amateur scientist, craftsman, artisan, etc., not to mention the advanced, can get mighty good value for the investment in your “Science and Mechanics.”

(This is the sort of letter the editors like to receive, because it gives actual facts; and that is all-important today. It also gives an excellent viewpoint of one of our readers, who is doing things—in contradistinction to those who are what we might term armchair scientists. And while both classes have their uses, we believe that the man who actually does things and makes an effort should get the preference over the purely mental type of reader. This is our personal opinion, but maybe we are wrong: so, if you disagree, let us hear from you.—Editor.)

It is a long time since your artist had a bouquet, so please pass on to him my appreciation of his excellent humorous illustrations. All the rest of you fellows seem to get so many bunches of flowers that there’s really no need to add mine to the collection. Although not (yet) a car owner, I am very interested in motor cars from every point of view (including technical developments and racing) and would like to exchange correspondence with enthusiasts on your side (females not barred!); so, if anyone wants first-hand information on English and Continental motor cars and racing, now’s your chance. Age 26; all letters answered. Other interests include books, films, stamps, motorcycling, etc.

(We are sure you will get a sufficient amount of letters to keep you occupied, and we trust only that your postage money will hold out. Remember, you brought this on yourself; and you will be responsible for all letters.—Editor.)

There have been several attempts to detect an ether flow through or past the earth on its trip around our sun and through space. This flow, which the experimenters expected to find, would be similar to a wind blowing through the earth’s materials; and the first attempt to prove it was the famous “etherdrift” experiment carried out by Michelson in 1887. The result of these experiments has been negative in all cases and has engendered doubts as to the existence of an ether. I believe the experiments were all carried out with instruments mounted horizontal to the earth’s surface, and am not aware of any attempt to detect a wind coming down from directly above.

Now, I have a theory that our earth may be at the center of an inwinding vortex or whirlwind in the ether. If this should be so, the ether wind would descend from above with equal strength at all points on the earth’s surface and penetrate through to a common local point at the center. The product resulting from this meeting is another story; but one of the effects would be a rotational push imparted to the earth, due to the spiral course of this inwhirling ether wind. Another effect would be what is known as gravitation, caused by all objects offering more or less obstruction to this wind and thereby being pressed to the earth’s surface; in a manner analogous to a Kansas wind which holds the farmer’s hat firmly on the side of the house for hours at a time. To detect a wind such as this it would be necessary to set the interferometer in a vertical position or nearly so, and I am desirous of having this tried or knowing if it has been tried.

In accordance with this theory, gravitation would, of necessity, be of two different forms; centripetal and centrifugal. The centripetal form mentioned above operates on the suns and planets, causing them to adhere firmly, and pressing loose objects and living creatures to the planet. The centrifugal form would operate to sustain the planets and solar systems in space and would make collisions forever impossible, due to the mutual tendency of the outer portions of these spirals to repel one another. This centrifugal form would also operate between the solar systems, causing them to keep their distance while the planets are held within the system by the tremendous force exerted in a centripetal manner by the gigantic inwhirling ether spiral belonging to the central sun of each system. The leverage in this latter case exerts a pressure so great as to raise the sun at the focal center to a point of incandescence. – THOMAS C. MOFFET, La Junta, Colorado

(The earth turns on its own axis, at the equator, roughly at a thousand miles an hour. In addition to this, the earth speeds in its orbit at the rate of some 65,000 miles an hour—a fairly good speed, as speeds go nowadays. In addition to this, the earth and the entire solar system are being transported in the direction of the star Vega at about twelve miles a second. Now then, physicists argue that, if there is such a thing as an all-pervading ether, it should be possible to get an indication of this wind as the earth ploughs through this ether at these various speeds, and it would make no difference whether you were located at the poles or at the equator. If there is such an ether, it should be possible with a suitable instrument to get an indication of it, though the difficulties of erecting a vertical system are great. Gravitation has nothing to do with “ether wind’ neither has centrifugal force. Neither can we agree with your idea as to the planets exerting much of a pressure in a centripetal manner on the Sun. The main reason for this is that all the planets rolled together would have mass rather small in proportion to the sun; in fact, only about one-fifth of one per cent. The effect on the Sun, therefore, at best, would be entirely negligible.—Editor.)