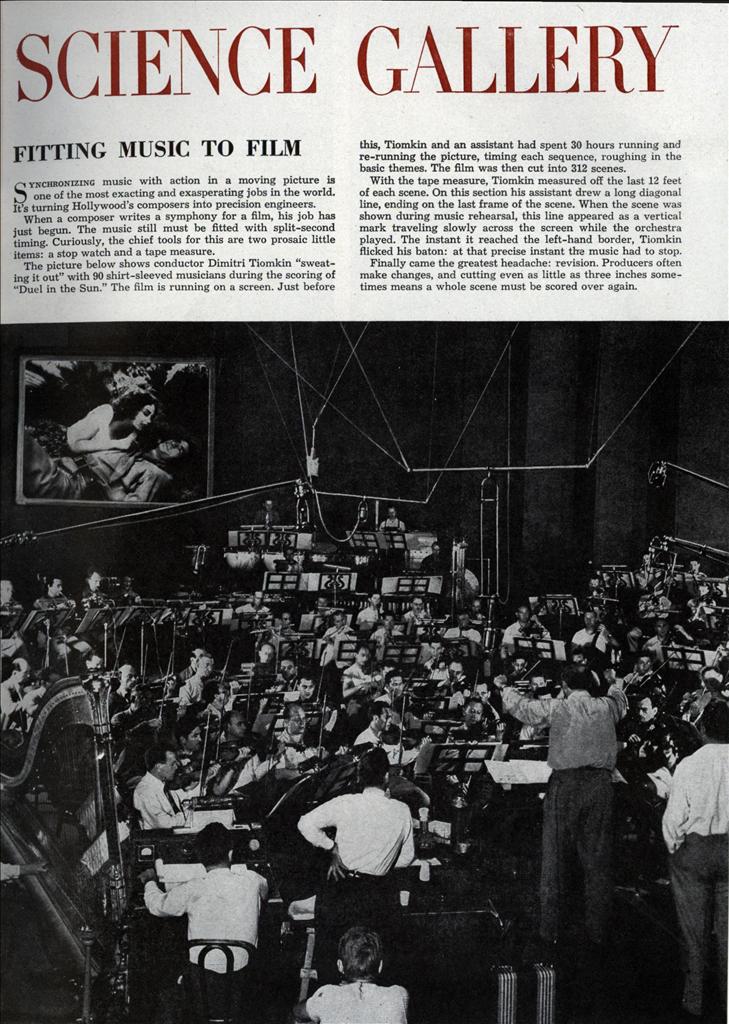 Synchronizing music with action in a moving picture is one of the most exacting and exasperating jobs in the world. It’s turning Hollywood’s composers into precision engineers.

When a composer writes a symphony for a film, his job has just begun. The music still must be fitted with split-second timing. Curiously, the chief tools for this are two prosaic little items: a stop watch and a tape measure.

The picture below shows conductor Dimitri Tiomkin “sweating it out” with 90 shirt-sleeved musicians during the scoring of “Duel in the Sun.” The film is running on a screen. Just before this, Tiomkin and an assistant had spent 30 hours running and re-running the picture, timing each sequence, roughing in the basic themes. The film was then cut into 312 scenes.

With the tape measure, Tiomkin measured off the last 12 feet of each scene. On this section his assistant drew a long diagonal line, ending on the last frame of the scene. When the scene was shown during music rehearsal, this line appeared as a vertical mark traveling slowly across the screen while the orchestra played. The instant it reached the left-hand border, Tiomkin flicked his baton: at that precise instant the music had to stop.

Finally came the greatest headache: revision. Producers often make changes, and cutting even as little as three inches sometimes means a whole scene must be scored over again.

HERCULES BEETLE is one of the world’s largest, reaching a length of a half foot and weighing more than two ounces. Males have these ferocious-looking pincers, which can take a bulldog grip on you, but won’t hurt. This is one of several specimens recently brought from Venezuela’s jungles to New York’s Bronx Zoo. The males fence with pincers until one grips the other, tosses him over his head, and walks away.

PLANES CAN BACK UP on the ground like trucks when the pitch on this three-bladed “butter-paddle” propeller is reversed. Designed by Curtiss, propeller is being tested on a Fairchild C-82 Packet at Hagerstown, Md. Engineers have found that the C-82, otherwise known as the “Flying Boxcar,” can be made to back up to a loading dock for freight. In landing, reverse pitch acts as brake, shortens distance of roll.

This is a storage unit in the Lago Oil and Transport Co.’s spheroid tank “farm” on Aruba, a small island in the Dutch West Indies. A tremendous wartime refinery on Aruba was one of the Allies’ greatest secrets. Once shelled by a U-boat, it was later secretly developed, became largest in the world. Aruba’s refinery, now a big peacetime producer, recently turned out its billionth barrel of oil.

HORSE-RACING GOGGLES are being tried at the Hipodromo track in Mexico City. Purpose is to help horse by protecting its eyes from clods of flying dirt, stones, and dust. A regular set of blinkers is used, but a transparent piece of plastic covers each eye opening in hood. First horse to wear] the device is Royal Rustle, trained by Mrs. George Ellis, who believes that goggles can improve racing performance.

MAGNETIC FLIGHT. This plane model flies in a vertical air stream in a test tunnel at Wright Field, Ohio. Photo was made looking up through tunnel, which is encircled by cur-rent-carrying cables. These create a field which operates the model’s controls. Observers toss the model into the airstream, which supports it. When a test is over, airstream is cut off; plane drops into net and is retrieved with a long-handled hook.

ANTI-EXPOSURE SUIT just developed by the Army Air Forces Air Rescue Service will provide protection for a ditched airman for as long as two weeks on a life raft, or up to an hour in extremely cold water (below). It can be donned in 30 seconds. Use of hood is optional; with suit drawstring pulled up tightly around the neck, an almost-watertight sealed suit is produced. Worn over flying gear, suit provides high ROUGHNESS IS MEASURED by an invention called a rugosimeter, which measures resistance to passage of a stream of compressed air between the surface being tested and a smooth, weighted plate resting on it. If the surface is rough air passes easily through the “valleys.” U. S. Rubber Co. uses the rugosimeter to detect and measure roughness in sheets ot rubber rolled out for production of footwear and other products.

degree of buoyancy. Mittens worn with the suit have warm woolen liners and are covered with a watertight, heat-sealed outer shell. They will keep hands warm, yet allow freedom. When suit is worn by a man in the water, the air within it rises to give a pillowing effect, helping to protect his head when seas are running. Hood, if used, can be laced tightly around the face. Entire equipment is made of lightweight, waterproof fabric.