Science Illustrated
Issue: Feb, 1947
Posted in: Sign of the Times, War
2 Comments on SCIENCE HAS NO NATIONALITY (Feb, 1947)

It’s true that science has no nationality, however I’m pretty sure that scientists do. It wasn’t just Nazi scientists the US gave safe harbor to. There were much worse people as well. 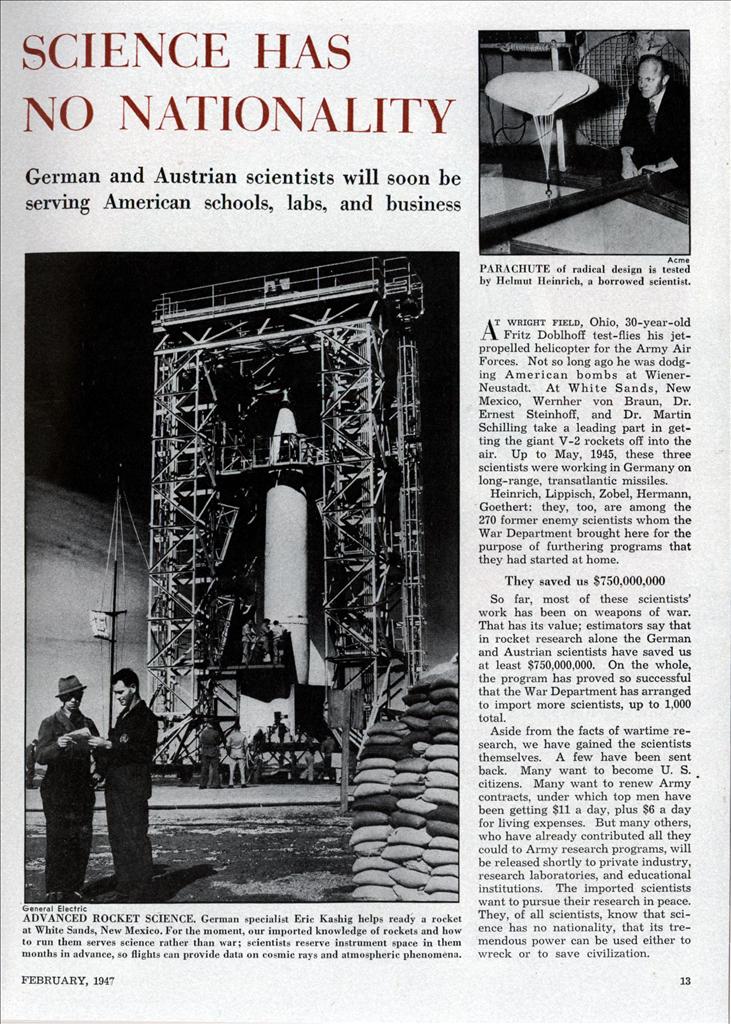 SCIENCE HAS NO NATIONALITY

German and Austrian scientists will soon be serving American schools, labs, and business At Wright field, Ohio, 30-year-old Fritz Doblhoff test-flies his jet-propelled helicopter for the Army Air Forces. Not so long ago he was dodging American bombs at Wiener-Neustadt. At White Sands, New Mexico, Wernher von Braun, Dr. Ernest Steinhoff, and Dr. Martin Schilling take a leading part in getting the giant V-2 rockets off into the air. Up to May, 1945, these three scientists were working in Germany on long-range, transatlantic missiles.

Heinrich, Lippisch, Zobel, Hermann, Goethert: they, too, are among the 270 former enemy scientists whom the War Department brought here for the purpose of furthering programs that they had started at home.

They saved us $750,000,000 So far, most of these scientists’ work has been on weapons of war. That has its value; estimators say that in rocket research alone the German and Austrian scientists have saved us at least $750,000,000. On the whole, the program has proved so successful that the War Department has arranged to import more scientists, up to 1,000 total.

Aside from the facts of wartime research, we have gained the scientists themselves. A few have been sent back. Many want to become U. S. citizens. Many want to renew Army contracts, under which top men have been getting $11 a day, plus $6 a day for living expenses. But many others, who have already contributed all they could to Army research programs, will be released shortly to private industry, research laboratories, and educational institutions. The imported scientists want to pursue their research in peace. They, of all scientists, know that science has no nationality, that its tremendous power can be used either to wreck or to save civilization.