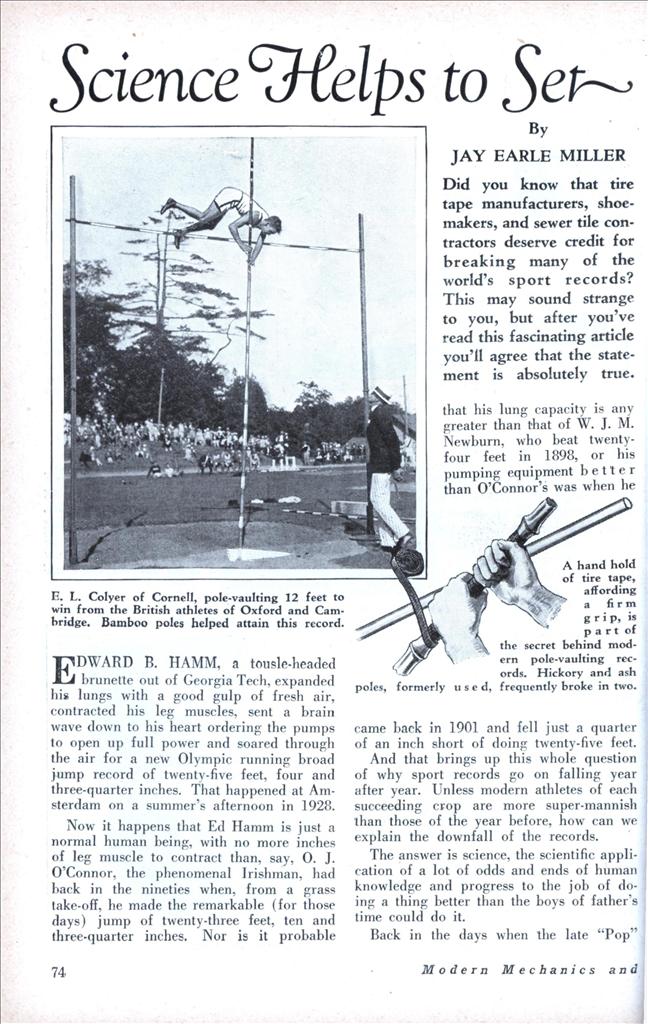 Did you know that tire tape manufacturers, shoemakers, and sewer tile contractors deserve credit for breaking many of the world’s sport records? This may sound strange to you, but after you’ve read this fascinating article you’ll agree that the statement is absolutely true.

EDWARD B. HAMM, a tousle-headed brunette out of Georgia Tech, expanded his lungs with a good gulp of fresh air, contracted his leg muscles, sent a brain wave down to his heart ordering the pumps to open up full power and soared through the air for a new Olympic running broad jump record of twenty-five feet, four and three-quarter inches. That happened at Amsterdam on a summer’s afternoon in 1928.

Now it happens that Ed Hamm is just a normal human being, with no more inches of leg muscle to contract than, say, 0. J. O’Connor, the phenomenal Irishman, had back in the nineties when, from a grass take-off, be made the remarkable (for those days) jump of twenty-three feet, ten and three-quarter inches. Nor is it probable that his lung capacity is any greater than that of W. J. M. Newburn, who beat twenty-four feet in 1898, or his pumping equipment better than O’Connor’s was when he came back in 1901 and fell just a quarter of an inch short of doing twenty-five feet.

And that brings up this whole question of why sport records go on falling year after year. Unless modern athletes of each succeeding crop are more super-mannish than those of the year before, how can we explain the downfall of the records.

The answer is science, the scientific application of a lot of odds and ends of human knowledge and progress to the job of doing a thing better than the boys of father’s time could do it.

Back in the days when the late “Pop”

then drive every furlong to a predetermined schedule as exact as the time card of the Twentieth Century Limited. Then one day, out of Finland, came Paavo Nurmi, the remarkable Finn, the greatest distance runner produced to date, with a stop watch strapped to his wrist, his race planned in advance, rating himself along at a predetermined speed that he knew would bring him in first. He checked off his laps as exactly as an engineer checks time at each wayside station, and ignored the rest of the field.

The lumber industry up in Finland broke the world’s and Olympic records in a couple of track meet branches. The combination of a product of Japan and an American tire tape manufacturer broke another. Shoemakers have made possible feats your father never dreamed of, and sewer contractors and graders have set many other new marks in the world of sport. Does that sound strange? Listen—! Back in 1908, when the Olympic games were held in London, javelins were made from English ash and the world’s record stood somewhat short of 180 feet. From the lumber industry the Finns learned that a stiff-shafted javelin made from the outer layer of wood on the sunny side of a birch tree grown in the far northern forests would travel farther than any English ash shaft ever went. The world’s record today is 229 feet, three and one-eighth inches. The straight-grained, sun-cured wood from the cold north doesn’t vibrate when it is thrown, so none of the energy put into it is wasted, but all goes to produce distance. That discovery won the Finnish team first, second, third and fourth places in the javelin contest at the 1920 Olympic games.

The same method of cutting wood produced the modern discus, which has replaced the old, unwieldy, heavy ringed affair of twenty years ago, and stepped the. world’s record up to 158 feet 1% inches.

Pole vaulting, in which Americans now excel, was originally a purely British sport, and a distressing one to watch, for hickory and ash poles had a habit of breaking off transversely and impaling their users in mid-air. An American conceived the idea of using light-weight bamboo, which may splinter but never breaks transversely because of its long, tough fiber, and to overcome the handicap of the slippery surface wound a hand-hold with tire tape. As a result Sabin W. Carr is the Olympic champion at 13 feet 9-3/8 inches and holds a world’s record of 14 feet.

Throwing the Hammer Farther In the early days the hammer throw, as its name indicates, consisted of heaving a blacksmith’s twelve-pound sledge, but the stiff shaft proved a decided handicap, and the distance gained was not especially impressive. Flexible cane handles were tried, with somewhat better results, but it remained for an American to attach a stirrup-shaped hand grip to a round iron ball with a length of piano wire and jump the record from just over seventy-eight feet to 189 feet 6-1/2; inches.

Fellows like Charlie Paddock, the California flash, have clipped the running records time and again partly because they have developed marvelous coordination of mind and muscle, and partly because sewer and grading contractors are producing better tracks, and shoemakers more scientifically designed track shoes. An English coach turned out a one-piece shoe that gave both sprinters and jumpers a prehensile grip on the ground, and the Finns invented a wide shoe with slightly curved soles to improve their javelin and discus throwers by providing a firm foundation, and yet one that would turn easily.

The perfect coordination of mind and muscle is largely a development of training methods, so far as the rank and file of athletes go, but every now and then there comes along a man whose system conforms to no known rules, and yet he may equal or excel all the rest. Ted Meredith was a shining example of scientific training, and Paddock and Nurmi represent the unconventional. Yet, each in his own way, is as scientific as the best, and because of that each man has done his share in breaking records.

Getting back to the field events, Harold Osborne, as a 24-year-old farmer boy school teacher, cleared the bar in the high jump at six feet 8-1/4 inches, and that record has stood for several years. His record was made possible by the so-called “western roll” developed by George Horine, which, incidentally, isn’t a roll at all, as was proved to the judges at the Olympic games in 1924, when they watched Osborne with eagle eyes, ready to disqualify him if he violated the rules by rolling or diving over the bar. In this style of jumping the jumper takes off at an angle of thirty-seven degrees from the line of the cross bar, gives his feet twice the momentum of his head, crosses the bar with his body lying horizontally and parallel to the bar, then drops his lower, or left arm down, bends the under leg at the knee, and extends the right, or upper leg. The body gives a violent twist and describes a half revolution, turning the jumper face downward, and he has apparently, though not actually, rolled over the bar. The secret is to keep the head up all the time and you can’t be disqualified for diving over head first. The knack isn’t difficult to acquire.

Ed Hamm’s sensational broad jumping has been mentioned. Two American negroes, Hubbard and Gourdin, solved the problem of getting past the 25-foot mark, where O’Connor had failed. They introduced a running step in mid-air, and both did better than twenty-five feet. Another American, LeGendre, in the pentathlon at the Paris games in 1924, added the trick of leaning backward just prior to the mid-air step, then whipping the body violently upward during the leg movement, and he jumped 25 feet 6 inches, but, as that was not in the official broad jump competition the mark was not recognized as an Olympic record, and the world’s mark has since been boosted to 25 feet 10% inches.

One could go on and cite similar scientific achievements in every branch of sport.

“Babe” Ruth is a great natural batter, but I he so-called “lively” ball helped him a lot, and gave the batter an advantage over the pitcher, whereas scientific study of curves had given the pitcher the edge for years.