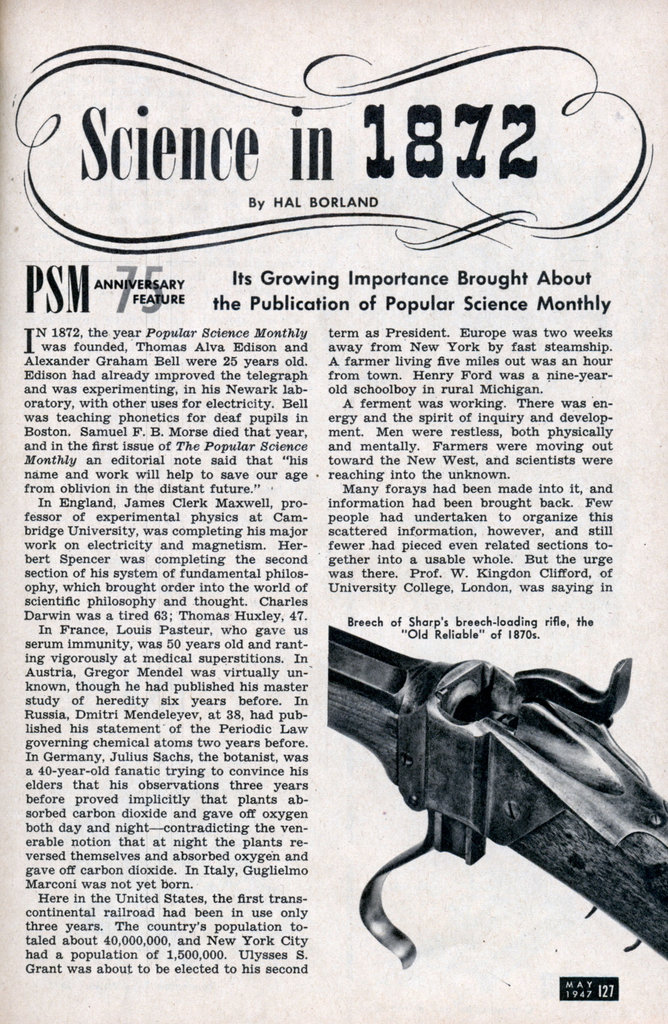 In England, James Clerk Maxwell, professor of experimental physics at Cambridge University, was completing his major work on electricity and magnetism. Herbert Spencer was completing the second section of his system of fundamental philosophy, which brought order into the world of scientific philosophy and thought. Charles Darwin was a tired 63; Thomas Huxley, 47.

In France, Louis Pasteur, who gave us serum immunity, was 50 years old and ranting vigorously at medical superstitions. In Austria, Gregor Mendel was virtually un-known, though he had published his master study of heredity six years before. In Russia, Dmitri Mendeleyev, at 38, had published his statement of the Periodic Law governing chemical atoms two years before. In Germany, Julius Sachs, the botanist, was a 40-year-old fanatic trying to convince his elders that his observations three years before proved implicitly that plants absorbed carbon dioxide and gave off oxygen both day and nightâ€”contradicting the venerable notion that at night the plants reversed themselves and absorbed oxygen and gave off carbon dioxide. In Italy, Guglielmo Marconi was not yet born.

Here in the United States, the first transcontinental railroad had been in use only three years. The country’s population totaled about 40,000,000, and New York City had a population of 1,500,000. Ulysses S. Grant was about to be elected to his second term as President. Europe was two weeks away from New York by fast steamship. A farmer living five miles out was an hour from town. Henry Ford was a nine-year-old schoolboy in rural Michigan.

A ferment was working. There was energy and the spirit of inquiry and development. Men were restless, both physically and mentally. Farmers were moving out toward the New West, and scientists were reaching into the unknown.

Many forays had been made into it, and information had been brought back. Few people had undertaken to organize this scattered information, however, and still fewer had pieced even related sections together into a usable whole. But the urge was there. Prof. W. Kingdon Clifford, of University College, London, was saying in 1872: “The subject of science is the human universe; that is to say, everything that is, or has been, or may be, related to man” (PSM, Nov. ’72, p. 94).

The 19th century brought a rush of discovery. Dalton published the first table of atomic weights and founded the atomic theory. Prout theorized that all elements were built of the same ultimate material. Berzelius set forth the electrochemical theory. Oersted discovered magnetism, and Ampere related it to electricity; Faraday 1 discovered electromagnetic inductionâ€”the foundation of the dynamoâ€”and Daniell and Grove invented the electric battery. Cook, Wheatstone and Morse put electricity to work in the telegraph.

In almost every field of science we had new and swiftly increasing knowledge. We had developed a scientific method of inquiry and investigation. Pure science, the accumulation of factual knowledge and scientific speculation, was pretty well advanced. We were ready to put it to wide use.

First of all, we had power. Man’s first source of power outside himself was in domesticated animals. Then he developed the water wheel, which was his major source of power until the 18th century, when steam was put to work pumping water from mines. Watt put steam pressure behind the piston; and steam wrought the Industrial Revolution. It was still the principal source of power in 1872. The principles of the electric generator were known, but it was Thomas Edison who was to apply those principles efficiently and make ours an age of electric power.

Power made it possible for man to develop tools, machines that could do heavier work and more of it than could be done by hand. Basic machine tools were in use before 1872â€”the lathe, the drill, the grinder, the milling machine, the die press, and the jig. And we had good steel in quantity. Bessemer in England and Kelly in America had invented in 1857 what is now known as the Bessemer process, and the Siemens brothers had invented the open-hearth method nine years later. We were beginning to make and use alloy steels.

We had compact high-power steam engines in locomotives, and we had thousands of miles of railroads. The telegraph had been in use since 1844. Steamships plied the oceans. We had the basis of an excellent system of communication. We had the camera, the telescope, the microscope.

Industrially, we had petroleumâ€”but limited uses for itâ€”illuminating gas, machines for making lead pencils and screws and horseshoes, the typewriter, the sewing machine, the rock drill, the rotary printing press, the electroplating process, and the knowledge of how to vulcanize rubber. We had the carbon arc lamp, and an inefficient electric locomotive had been built and run.

We had an industrial system and a market for its products, a swiftly increasing population, a rapidly expanding country, and new wealth from gold and silver mines, from timber, from industry itself. The Civil War so recently ended had marked the turn from an essentially rural economy to an urban industrial economy, from slave labor in the fields to paid labor in the factories. Industry needed science and all the practical knowledge science could muster. ‘ Science itself was ready to come out of the cloisters and take its place in the world.

In 1872, we had reached that point in time and development when a reservoir of knowledge was ready to pour its stream over the spillway onto the water wheel of practical application.

From this point on it would be impossible ever again completely to separate pure science from applied science. Back of applied science always would stand pure science, the search for fundamental truth and the establishment of scientific principles; but that truth and those principles would be interlocked henceforth. For man now had the most important tool of allâ€” the scientific approach to his problems. From here on he would question, investigate, and base his answer on honest inquiry.

Herbert Spencer was the philosopher-prophet of this new era. He saw, with more clarity than any other man writing at the time, the scope of science and the necessity of organizing scientific knowledge and applying it to all phases of life. He knew and followed the work of the major scientists of the day. He had practical experience as an engineer and an economist. He had written a book on education that laid the foundations for modern schooling. In the 1860s he began the series of scientific-philosophical works that mark a turning point in science itself. Darwin challenged venerable ideas and offered new ones. Spencer, starting from Darwin’s theories, integrated the sciences, pointed out the common goal of all scientists, and pioneered the modern scientific approach to life and its problems. More, he made scientific knowledge and the scientific method understandable to the layman.

Three volumes of Spencer’s major work had been published by 1872. The fourth volume, “Principles of Sociology,” was published in America in The Popular Science Monthly. This publicity gave Spencer’s philosophy of universal science its first widespread public. It stirred bitter controversy, being Darwinian. But it brought science out of the musty laboratories.

Rereading Spencer now is like reviewing well-known fundamentals, so completely have his ideas been accepted and woven into our basic knowledge. As recently as December 1946, James B. Conant restated one of Spencer’s principles in his address to the American Association for the Advancement of Science, when he said, “The test of a new idea is not only its success in correlating the then-known facts, but much more its success or failure in stimulating further experimentation or observation which in turn is fruitful. This dynamic quality of science viewed not as a practical undertaking but as development of conceptual schemes seems to me to be close to the heart of the best definition (of science.)”