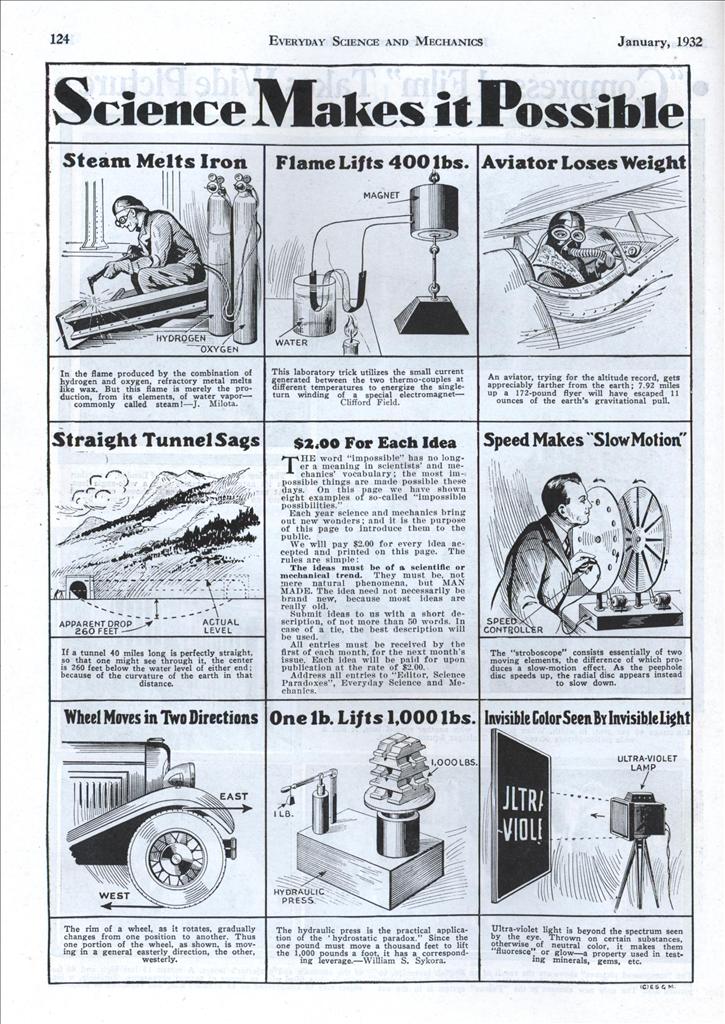 In the flame produced by the combination of hydrogen and oxygen, refractory metal melts like wax. But this flame is merely the production, from its elements, of water vapor— commonly called steam!—J. Milota.

If a tunnel 40 miles long is perfectly straight, so that one might see through it, the center is 260 feet below the water level of either end; because of the curvature of the earth in that distance.

The rim of a wheel, as it rotates, gradually changes from one position to another. Thus one portion of the wheel, as shown, is moving in a general easterly direction, the other, westerly.

This laboratory trick utilizes the small current generated between the two thermo-couples at different temperatures to energize the single-turn winding of a special electromagnet— Clifford Field.

The hydraulic press is the practical application of the “hydrostatic paradox.” Since the one pound must move a thousand feet to lift the 1,000 pounds a foot, it has a corresponding leverage.—William S. Sykora.

An aviator, trying for the altitude record, gets appreciably farther from the earth; 7.92 miles up a 172-pound flyer will have escaped 11 ounces of the earth’s gravitational pull.

The “stroboscope” consists essentially of two moving elements, the difference of which produces a slow-motion effect. As the peephole disc speeds up, the radial disc appears instead to slow down.

Ultra-Violet light is beyond the spectrum seen by the eye. Thrown on certain substances, otherwise of neutral color, it makes them fluoresce. or glow—a property used in testing minerals, gems, etc.

THE word “impossible” has no longer a meaning in scientists’ and mechanics’ vocabulary; the most impossible things are made possible these days. On this page we have shown eight examples of so-called “impossible possibilities.”

Each year science and mechanics bring out new wonders; and it is the purpose of this page to introduce them to the public.

We will pay $2.00 for every idea accepted and printed on this page. The rules are simple: The ideas must be of a scientific or mechanical trend. They must be. not mere natural phenomena, but MAN MADE. The idea need not necessarily lie brand new, because most ideas are really old.

Submit ideas to us with a short description, of not more than 50 words. In case of a tie, the best description will be used.

All entries must be received by the first of each month, for the next month’s issue. Each idea will be paid for upon publication at the rate of $2.00.