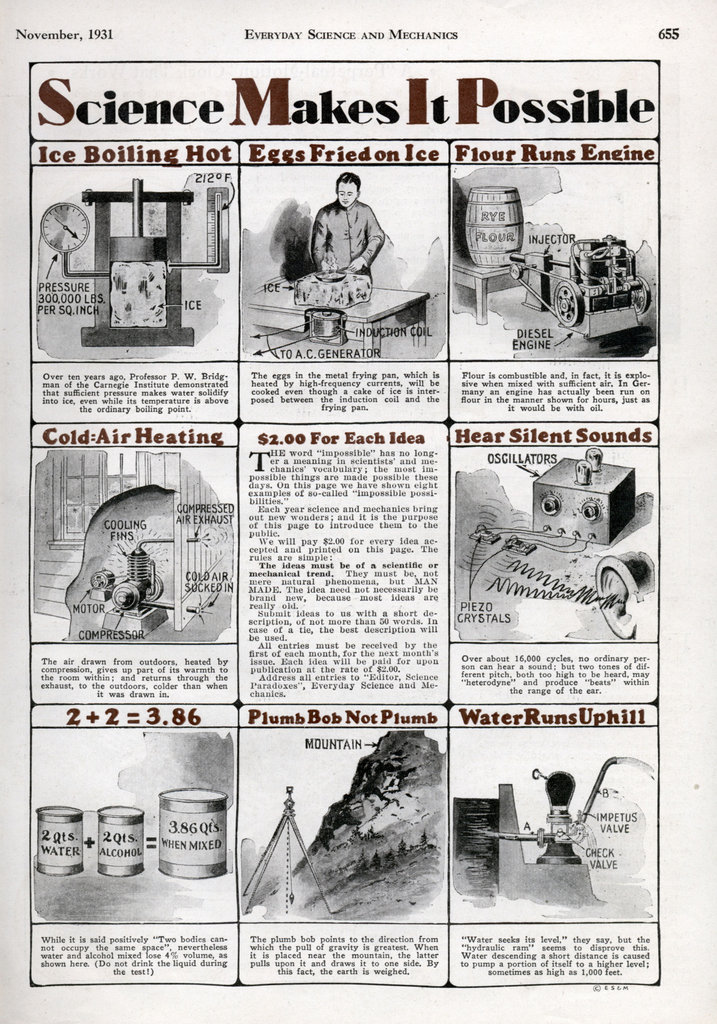 $2.00 For Each Idea THE word “impossible” has no longer a meaning in scientists’ and mechanics’ vocabulary; the most impossible things are made possible these days. On this page we have shown eight examples of so-called “impossible possibilities.”

Each year science and mechanics bring out new wonders and it is the purpose of this page to introduce them to the public.

We will pay $2.00 for every idea accepted and printed on this page. The rules are simple: The ideas must be of a scientific or mechanical trend. They must be, not mere natural phenomena, but MAN MADE. The idea need not necessarily be brand new, because most ideas are really old.

Submit ideas to us with a short description, of not more than 50 words. In case of a tie, the best description will be used.

All entries must be received by the first of each month, for the next month’s issue. Each idea will be paid for upon publication at the rate of $2.00.

Ice Boiling Hot.
Over ten years ago, Professor P. W. Bridgman of the Carnegie Institute demonstrated that sufficient pressure makes water solidify into ice, even while its temperature is above the ordinary boiling point.

Eggs Fried on Ice.
The eggs in the metal frying pan, which is heated by high-frequency currents, will be cooked even though a cake of ice is interposed between the induction coil and the frying pan.

Flour Runs Engine.
Flour is combustible and, in fact, it is explosive when mixed with sufficient air. In Germany an engine has actually been run on flour in the manner shown for hours, just as it would be with oil.

Cold = Air Heating.
The air drawn from outdoors, heated by compression, gives up part of its warmth to the room within; and returns through the exhaust, to the outdoors, colder than when it was drawn in.

Hear Silent Sounds.
Over about 16,000 cycles, no ordinary person can hear a sound; but two tones of different pitch, both too high to be heard, may “heterodyne” and produce “beats” within the range of the ear.

2 + 2 = 3.86.
While it is said positively “Two bodies cannot occupy the same space”, nevertheless water and alcohol mixed lose 4% volume as shown here. (Do not drink the liquid during the test!)

Plumb Bob Not Plumb.
The plumb bob points to the direction from which the pull of gravity is greatest. When it is placed near the mountain, the latter pulls upon it and draws it to one side. By this fact, the earth is weighed.

Water Runs Uphill.
“Water seeks its level,” they say, but the “hydraulic ram” seems to disprove this. Water descending a short distance is caused to pump a portion of itself to a higher level; sometimes as high as 1,000 feet.