There is a lot of really interesting, important science on this one page. We have cosmic expansion, nuclear fission, Kaluza–Klein theory, proto-computing, the advancement of fluoroscopy, an incorrect model of planetary formation, and um… a way to identify criminals by their sinuses. 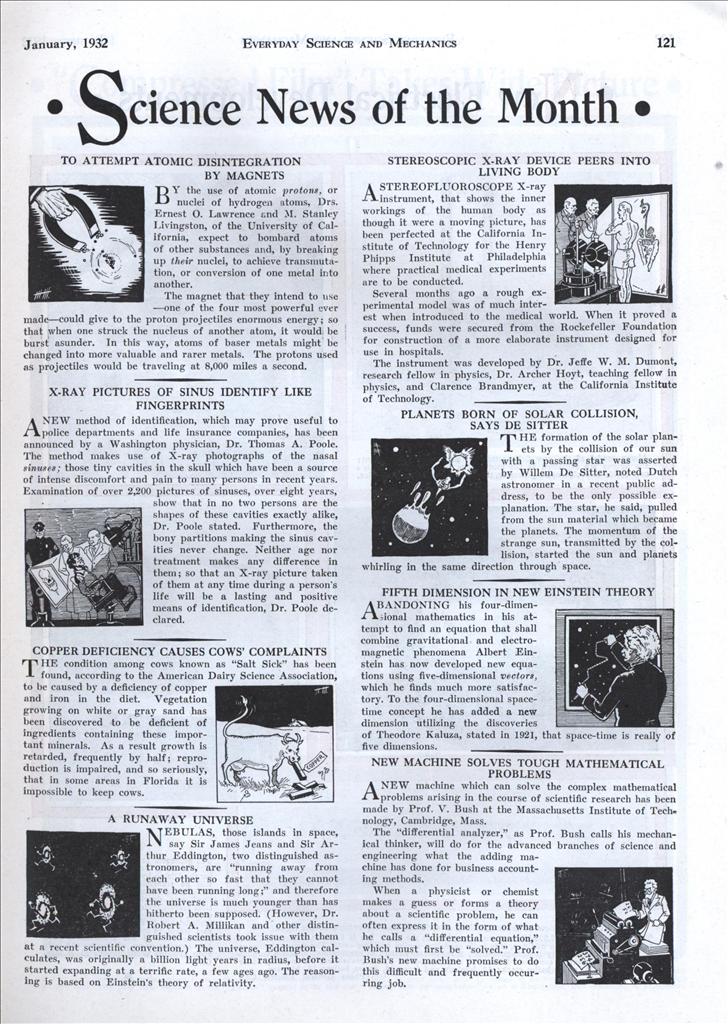 Science News of the Month

TO ATTEMPT ATOMIC DISINTEGRATION BY MAGNETS
BY the use of atomic protons, or nuclei of hydrogen atoms, Drs. Ernest O. Lawrence and M. Stanley Livingston, of the University of California, expect to bombard atoms of other substances and, by breaking up their nuclei, to achieve transmutation, or conversion of one metal into another.

The magnet that they intend to use —one of the four most powerful ever made—could give to the proton projectiles enormous energy; so that when one struck the nucleus of another atom, it would, be burst asunder. In this way, atoms of baser metals might be changed into more valuable and rarer metals. The protons used as projectiles would be traveling at 8,000 miles a second.

X-RAY PICTURES OF SINUS IDENTIFY LIKE FINGERPRINTS
A NEW method of identification, which may prove useful to police departments and life insurance companies, has been announced by a Washington physician, Dr. Thomas A. Poole. The method makes use of x-ray photographs of the nasal sinuses; those tiny cavities in the skull which have been a source of intense discomfort and pain to many persons in recent years. Examination of over 2,200 pictures of sinuses, over eight years, show that in no two persons are the shapes of these cavities exactly alike, Dr. Poole stated. Furthermore, the bony partitions making the sinus cavities never change. Neither age nor treatment makes any difference in them; so that an X-ray picture taken of them at any time during a person’s life will be a lasting and positive means of identification, Dr. Poole declared.

COPPER DEFICIENCY CAUSES COWS’ COMPLAINTS
THE condition among cows known as “Salt Sick” has been found, according to the American Dairy Science Association, to be caused by a deficiency of copper and iron in the diet. Vegetation growing on white or gray sand has been discovered to be deficient of ingredients containing these important minerals. As a result growth is retarded, frequently by half; reproduction is impaired, and so seriously, that in some areas in Florida it is impossible to keep cows.

A RUNAWAY UNIVERSE
NEBULAS, those islands in space, say Sir James Jeans and Sir Arthur Eddington, two distinguished astronomers, are “running away from each other so fast that they cannot have been running long;” and therefore the universe is much younger than has hitherto been supposed. (However, Dr. Robert A. Millikan and other distinguished scientists took issue with them at a recent scientific convention.) The universe, Eddington calculates, was originally a billion light years in radius, before it started expanding at a terrific rate, a few ages ago. The reasoning is based on Einstein’s theory of relativity.

STEREOSCOPIC X-RAY DEVICE PEERS INTO LIVING BODY
A STEREOFLUOROSCOPE X-ray instrument, that shows the inner workings of the human body as though it were a moving picture, has been perfected at the California Institute of Technology for the Henry Phipps Institute at Philadelphia where practical medical experiments are to be conducted.

Several months ago a rough experimental model was of much interest when introduced to the medical world. When it proved a success, funds were secured from the Rockefeller Foundation for construction of a more elaborate instrument designed for use in hospitals.

PLANETS BORN OF SOLAR COLLISION, SAYS DE SITTER
THE formation of the solar planets by the collision of our sun with a passing star was asserted by Willem De Sitter, noted Dutch astronomer in a recent public address, to be the only possible explanation. The star, he said, pulled from the sun material which became the planets. The momentum of the strange sun, transmitted by the collision, started the sun and planets whirling in the same direction through space.

FIFTH DIMENSION IN NEW EINSTEIN THEORY
Abandoning his four-dimensional mathematics in his attempt to find an equation that shall combine gravitational and electromagnetic phenomena Albert Einstein has now developed new equations using five-dimensional vectors, which he finds much more satisfactory. To the four-dimensional space-time concept he has added a new dimension utilizing the discoveries of Theodore Kaluza, stated in 1921, that space-time is really of five dimensions.

NEW MACHINE SOLVES TOUGH MATHEMATICAL PROBLEMS
A NEW machine which can solve the complex mathematical problems arising in the course of scientific research has been made by Prof. v. Bush at the Massachusetts Institute of Technology, Cambridge, Mass.

The “differential analyzer,” as Prof. Bush calls his mechanical thinker, will do for the advanced branches of science and engineering what the adding machine has done for business accounting methods.

When a physicist or chemist makes a guess or forms a theory about a scientific problem, he can often express it in the form of what he calls a “differential equation,” which must first be “solved.” Prof. Bush’s new machine promises to do this difficult and frequently occurring job.