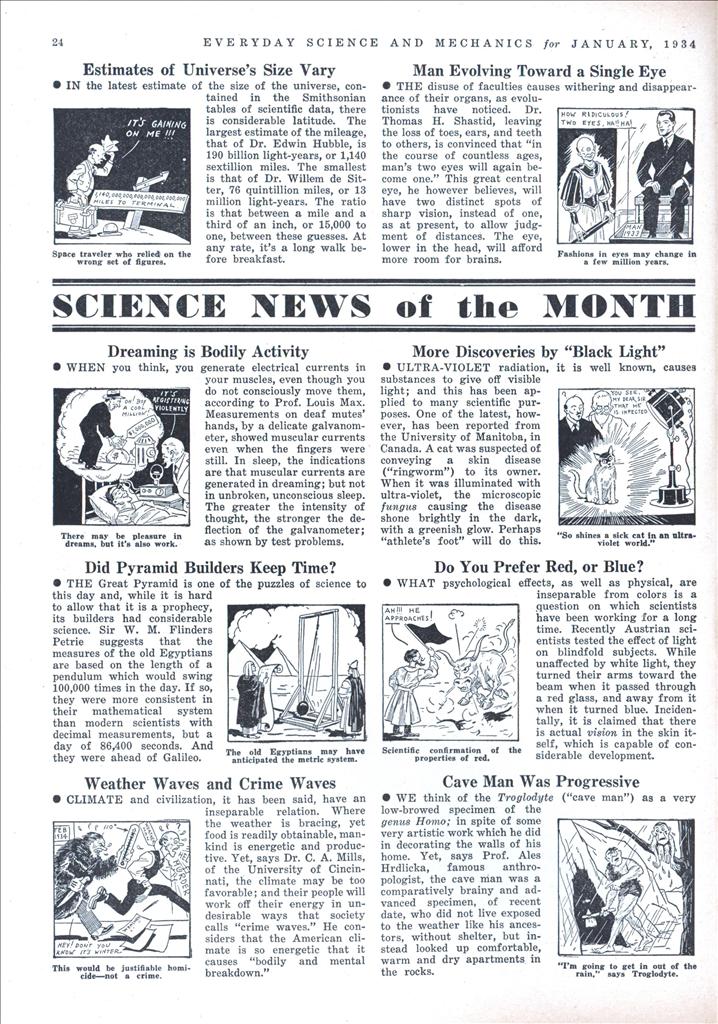 •IN the latest estimate of the size of the universe, contained in the Smithsonian tables of scientific data, there is considerable latitude. The largest estimate of the mileage, that of Dr. Edwin Hubble, is 190 billion light-years, or 1,140 sextillion miles. The smallest is that of Dr. Willem de Sitter, 76 quintillion miles, or 13 million light-years. The ratio is that between a mile and a third of an inch, or 15,000 to one, between these guesses. At any rate, it’s a long walk before breakfast.

Man Evolving Toward a Single Eye

• THE disuse of faculties causes withering and disappearance of their organs, as evolutionists have noticed. Dr. Thomas H. Shastid, leaving the loss of toes, ears, and teeth to others, is convinced that “in the course of countless ages, man’s two eyes will again become one.” This great central eye, he however believes, will have two distinct spots of sharp vision, instead of one, as at present, to allow judgment of distances. The eye, lower in the head, will afford more room for brains.

• WHEN you think, you generate electrical currents in your muscles, even though you do not consciously move them, according to Prof. Louis Max. Measurements on deaf mutes’ hands, by a delicate galvanometer, showed muscular currents even when the fingers were still. In sleep, the indications are that muscular currents are generated in dreaming; but not in unbroken, unconscious sleep. The greater the intensity of thought, the stronger the deflection of the galvanometer; as shown by test problems.

• ULTRA-VIOLET radiation, it is well known, causes substances to give off visible light; and this has been applied to many scientific purposes. One of the latest, however, has been reported from the University of Manitoba, in Canada. A cat was suspected of conveying a skin disease (“ringworm”) to its owner. When it was illuminated with ultra-violet, the microscopic fungus causing the disease shone brightly in the dark, with a greenish glow. Perhaps “athlete’s foot” will do this.

• THE Great Pyramid is one of the puzzles of science to this day and, while it is hard to allow that it is a prophecy, its builders had considerable science. Sir W. M. Flinders Petrie suggests that the measures of the old Egyptians are based on the length of a pendulum which would swing 100,000 times in the day. If so, they were more consistent in their mathematical system than modern scientists with decimal measurements, but a day of 86,400 seconds. And they were ahead of Galileo.

• CLIMATE and civilization, it has been said, have an inseparable relation. Where the weather is bracing, yet food is readily obtainable, mankind is energetic and productive. Yet, says Dr. C. A. Mills, of the University of Cincinnati, the climate may be too favorable; and their people will work off their energy in undesirable ways that society calls “crime waves.” He considers that the American climate is so energetic that it causes “bodily and mental breakdown.”

Do You Prefer Red, or Blue?

• WHAT psychological effects, as well as physical, are inseparable from colors is a .question on which scientists have been working for a long time. Recently Austrian scientists tested the effect of light on blindfold subjects. While unaffected by white light, they turned their arms toward the beam when it passed through a red glass, and away from it when it turned blue. Incidentally, it is claimed that there is actual vision in the skin itself, which is capable of considerable development.

• WE think of the Troglodyte (“cave man”) as a very low-browed specimen of the genus Homo; in spite of some very artistic work which he did in decorating the walls of his home. Yet, says Prof. Ales Hrdlicka, famous anthropologist, the cave man was a comparatively brainy and advanced specimen, of recent date, who did not live exposed to the weather like his ancestors, without shelter, but instead looked up comfortable, warm and dry apartments in the rocks.