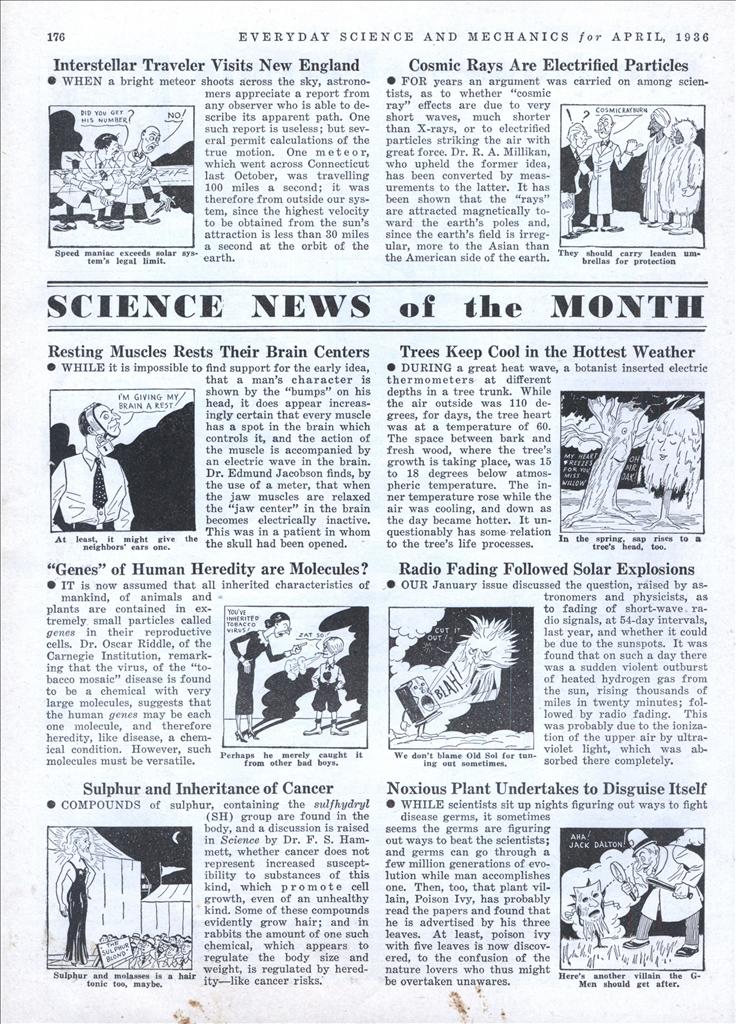 Interstellar Traveler Visits New England
• WHEN a bright meteor shoots across the sky, astronomers appreciate a report from any observer who is able to describe its apparent path. One such report is useless; but several permit calculations of the true motion. One meteor, which went across Connecticut last October, was travelling 100 miles a second; it was therefore from outside our system, since the highest velocity to be obtained from the sun’s attraction is less than 30 miles a second at the orbit of the earth.

Resting Muscles Rests Their Brain Centers
• WHILE it is impossible to find support for the early idea, that a man’s character is shown by the “bumps” on his head, it does appear increasingly certain that every muscle has a spot in the brain which controls it, and the action of the muscle is accompanied by an electric wave in the brain. Dr. Edmund Jacobson finds, by the use of a meter, that when the jaw muscles are relaxed the “jaw center” in the brain becomes electrically inactive. This was in a patient in whom the skull had been opened.

“Genes” of Human Heredity are Molecules?
• IT is now assumed that all inherited characteristics of mankind, of animals and plants are contained in extremely small particles called genes in their reproductive cells. Dr. Oscar Riddle, of the Carnegie Institution, remarking that the virus, of the “tobacco mosaic” disease is found to be a chemical with very large molecules, suggests that the human genes may be each one molecule, and therefore heredity, like disease, a chemical condition. However, such molecules must be versatile.

Sulphur and Inheritance of Cancer
• COMPOUNDS of sulphur, containing the sulfhydryl (SH) group are found in the body, and a discussion is raised in Science by Dr. F. S. Hammett, whether cancer does not represent increased susceptibility to substances of this kind, which promote cell growth, even of an unhealthy kind. Some of these compounds evidently grow hair; and in rabbits the amount of one such chemical, which appears to regulate the body size and weight, is regulated by heredity—like cancer risks.’

Cosmic Rays Are Electrified Particles
• FOR years an argument was carried on among scientists, as to whether “cosmic ray” effects are due to very short waves, much shorter than X-rays, or to electrified particles striking the air with great force. Dr. R. A. Millikan, who upheld the former idea, has been converted by measurements to the latter. It has been shown that the “rays” are attracted magnetically toward the earth’s poles and, since the earth’s field is irregular, more to the Asian than the American side of the earth.

Trees Keep Cool in the Hottest Weather
• DURING a great heat wave, a botanist inserted electric thermometers at different depths in a tree trunk. While the air outside was 110 degrees, for days, the tree heart was at a temperature of 60. The space between bark and fresh wood, where the tree’s growth is taking place, was 15 to 18 degrees below atmospheric temperature. The inner temperature rose while the air was cooling, and down as the day became hotter. It unquestionably has some relation to the tree’s life processes.

Radio Fading Followed Solar Explosions
• OUR January issue discussed the question, raised by astronomers and physicists, as to fading of short-wave radio signals, at 54-day intervals, last year, and whether it could be due to the sunspots. It was found that on such a day there was a sudden violent outburst of heated hydrogen gas from the sun, rising thousands of miles in twenty minutes; followed by radio fading. This was probably due to the ionization of the upper air by ultraviolet light, which was absorbed there completely.

Noxious Plant Undertakes to Disguise Itself
• WHILE scientists sit up nights figuring out ways to fight disease germs, it sometimes seems the germs are figuring out ways to beat the scientists; and germs can go through a few million generations of evolution while man accomplishes one. Then, too, that plant villain, Poison Ivy, has probably read the papers and found that he is advertised by his three leaves. At least, poison ivy with five leaves is now discovered, to the confusion of the nature lovers who thus might be overtaken unawares.