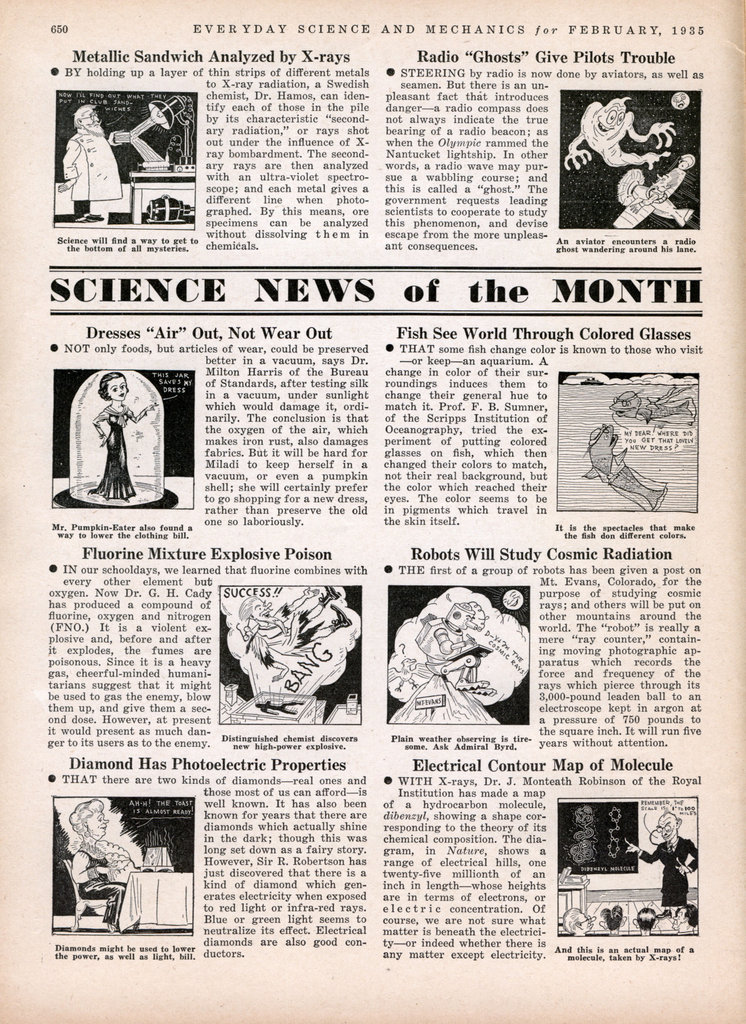 Metallic Sandwich Analyzed by X-rays
• BY holding up a layer of thin strips of different metals to X-ray radiation, a Swedish chemist, Dr. Hamos, can identify each of those in the pile by its characteristic “secondary radiation,” or rays shot out under the influence of X-ray bombardment. The secondary rays are then analyzed with an ultra-violet spectroscope; and each metal gives a different line when photographed. By this means, ore specimens can be analyzed without dissolving them in chemicals.

Dresses “Air” Out, Not Wear Out
• NOT only foods, but articles of wear, could be preserved better in a vacuum, says Dr. Milton Harris of the Bureau of Standards, after testing silk in a vacuum, under sunlight which would damage it, ordinarily. The conclusion is that the oxygen of the air, which makes iron rust, also damages fabrics. But it will be hard for Miladi to keep herself in a vacuum, or even a pumpkin shell; she will certainly prefer to go shopping for a new dress, rather than preserve the old one so laboriously.

Fluorine Mixture Explosive Poison
• IN our schooldays, we learned that fluorine combines with every other element but oxygen. Now Dr. G. H. Cady has produced a compound of fluorine, oxygen and nitrogen (FNO.) It is a violent explosive and, before and after it explodes, the fumes are poisonous. Since it is a heavy gas, cheerful-minded humanitarians suggest that it might be used to gas the enemy, blow them up, and give them a second dose. However, at present it would present as much danger to its users as to the enemy.

Diamond Has Photoelectric Properties
* THAT there are two kinds of diamonds—real ones and those most of us can afford—is well known. It has also been known for years that there are diamonds which actually shine in the dark; though this was long set down as a fairy story. However, Sir R. Robertson has just discovered that there is a kind of diamond which generates electricity when exposed to red light or infra-red rays. Blue or green light seems to neutralize its effect. Electrical diamonds are also good conductors.

Radio “Ghosts” Give Pilots Trouble
• STEERING by radio is now done by aviators, as well as seamen. But there is an unpleasant fact that introduces danger—a radio compass does not always indicate the true bearing of a radio beacon; as when the Olympic rammed the Nantucket lightship. In other words, a radio wave may pursue a wabbling course; and this is called a “ghost.” The government requests leading scientists to cooperate to study this phenomenon, and devise escape from the more unpleasant consequences.

Fish See World Through Colored Glasses
• THAT some fish change color is known to those who visit—or keep—an aquarium. A change in color of their surroundings induces them to change their general hue to match it. Prof. F. B. Sumner, of the Scripps Institution of Oceanography, tried the experiment of putting colored glasses on fish, which then changed their colors to match, not their real background, but the color which reached their eyes. The color seems to be in pigments which travel in the skin itself.

Robots Will Study Cosmic Radiation
• THE first of a group of robots has been given a post on Mt. Evans, Colorado, for the purpose of studying cosmic rays; and others will be put on other mountains around the world. The “robot” is really a mere “ray counter,” containing moving photographic apparatus which records the force and frequency of the rays which pierce through its 3,000-pound leaden ball to an electroscope kept in argon at a pressure of 750 pounds to the square inch. It will run five years without attention.

Electrical Contour Map of Molecule
• WITH X-rays, Dr. J. Monteath Robinson of the Royal Institution has made a map of a hydrocarbon molecule, dibenzyl, showing a shape corresponding to the theory of its chemical composition. The diagram, in Nature, shows a range of electrical hills, one twenty-five millionth of an inch in length—whose heights are in terms of electrons, or electric concentration. Of course, we are not sure what matter is beneath the electricity—or indeed whether there is any matter except electricity.