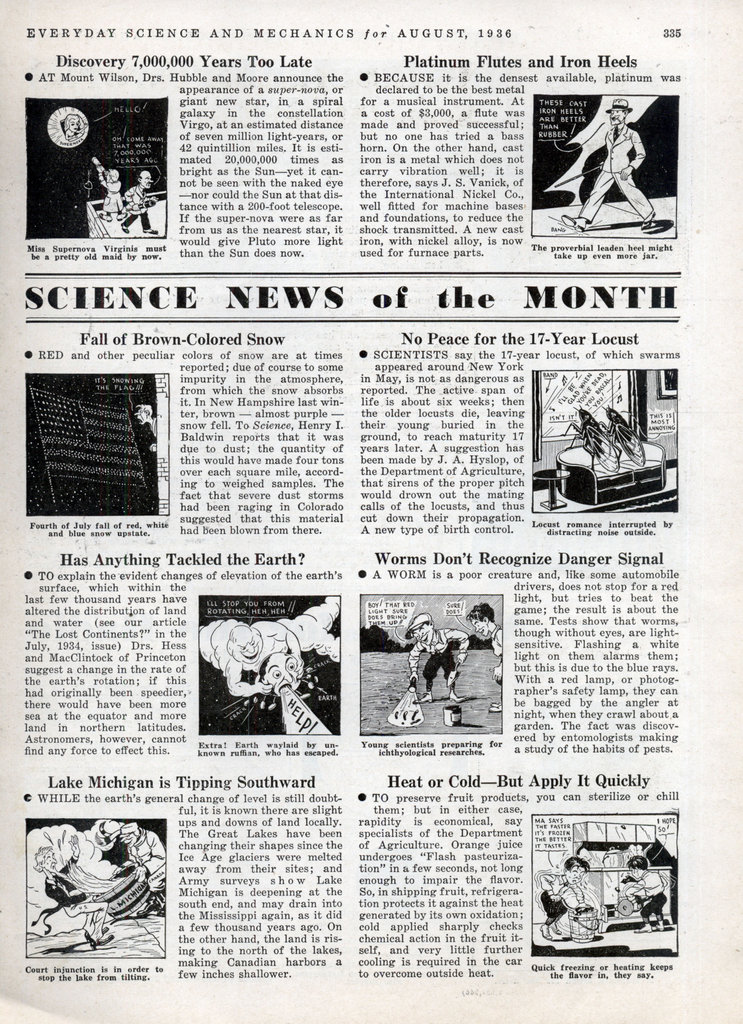 AT Mount Wilson, Drs. Hubble and Moore announce the appearance of a super-nova, or giant new star, in a spiral galaxy in the constellation Virgo, at an estimated distance of seven million light-years, or 42 quintillion miles. It is estimated 20,000,000 times as bright as the Sunâ€”yet it cannot be seen with the naked eye â€”nor could the Sun at that distance with a 200-foot telescope. If the super-nova were as far from us as the nearest star, it would give Pluto more light than the Sun does now.

BECAUSE it is the densest available, platinum was declared to be the best metal for a musical instrument. At a cost of $3,000, a flute was made and proved successful; but no one has tried a bass horn. On the other hand, cast iron is a metal which does not carry vibration well; it is therefore, says J. S. Vanick, of the International Nickel Co., well fitted for machine bases and foundations, to reduce the shock transmitted. A new cast iron, with nickel alloy, is now used for furnace parts.

RED and other peculiar colors of snow are at times reported; due of course to some impurity in the atmosphere, from which the snow absorbs it. In New Hampshire last winter, brown â€” almost purple â€” snow fell. To Science, Henry I. Baldwin reports that it was due to dust; the quantity of this would have made four tons over each square mile, according to weighed samples. The fact that severe dust storms had been raging in Colorado suggested that this material had been blown from there.

Has Anything Tackled the Earth?

TO explain the evident changes of elevation of the earth’s surface, which within the last few thousand years have altered the distribution of land and water (see our article “The Lost Continents?” in the July, 1934, issue) Drs. Hess and MacClintock of Princeton suggest a change in the rate of the earth’s rotation; if this had originally been speedier, there would have been more sea at the equator and more land in northern latitudes. Astronomers, however, cannot find any force to effect this.

No Peace for the 17-Year Locust

SCIENTISTS say the 17-year locust, of which swarms appeared around New York in May, is not as dangerous as reported. The active span of life is about six weeks; then the older locusts die, leaving their young buried in the ground, to reach maturity 17 years later. A suggestion has been made by J. A. Hyslop, of the Department of Agriculture, that sirens of the proper pitch would drown out the mating calls of the locusts, and thus cut down their propagation. A new type of birth control.

A WORM is a poor creature and, like some automobile drivers, does not stop for a red light, but tries to beat the game; the result is about the same. Tests show that worms, though without eyes, are light-sensitive. Flashing a, white light on them alarms them; but this is due to the blue rays. With a red lamp, or photographer’s safety lamp, they can be bagged by the angler at night, when they crawl about a garden. The fact was discovered by entomologists making a study of the habits of pests.

WHILE the earth’s general change of level is still doubtful, it is known there are slight ups and downs of land locally. The Great Lakes have been changing their shapes since the Ice Age glaciers were melted away from their sites; and Army surveys show Lake Michigan is deepening at the south end, and may drain into the Mississippi again, as it did a few thousand years ago. On the other hand, the land is rising to the north of the lakes, making Canadian harbors a few inches shallower.

Heat or Coldâ€”But Apply It Quickly

TO preserve fruit products, you can sterilize or chill them; but in either case, rapidity is economical, say specialists of the Department of Agriculture. Orange juice undergoes “Flash pasteurization” in a few seconds, not long enough to impair the flavor. So, in shipping fruit, refrigeration protects it against the heat generated by its own oxidation; cold applied sharply checks chemical action in the fruit itself, and very little further cooling is required in the car to overcome outside heat.