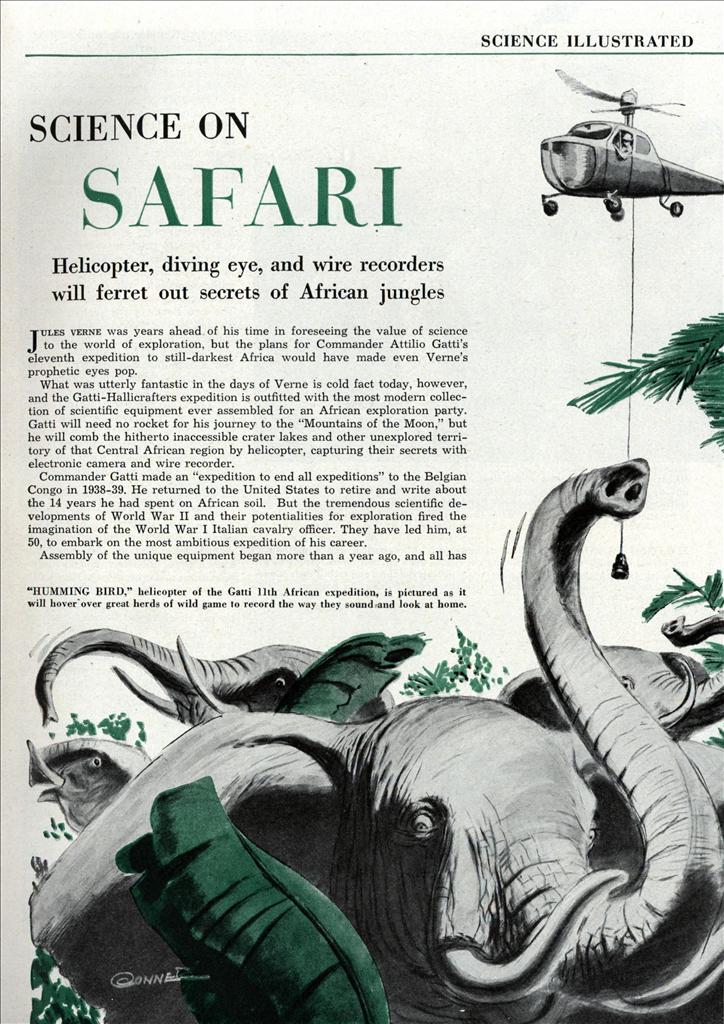 Helicopter, diving eye, and wire recorders will ferret out secrets of African jungles Jules Verne was years ahead of his time in foreseeing the value of science to the world of exploration, but the plans for Commander Attilio Gatti’s eleventh expedition to still-darkest Africa would have made even Verne’s prophetic eyes pop.

What was utterly fantastic in the days of Verne is cold fact today, however, and the Gatti-Hallicrafters expedition is outfitted with the most modern collection of scientific equipment ever assembled for an African exploration party. Gatti will need no rocket for his journey to the “Mountains of the Moon,” but he will comb the hitherto inaccessible crater lakes and other unexplored territory of that Central African region by helicopter, capturing their secrets with electronic camera and wire recorder.

Commander Gatti made an “expedition to end all expeditions’, to the Belgian Congo in 1938-39. He returned to the United States to retire and write about the 14 years he had spent on African soil. But the tremendous scientific developments of World War II and their potentialities for exploration fired the imagination of the World War I Italian cavalry officer. They have led him, at 50, to embark on the most ambitious expedition of his career.

Assembly of the unique equipment began more than a year ago, and all has been tested under tropical conditions. An advance party will leave early this summer for Uganda to build a base camp 6,500 feet up on the slope of Mount Ruwenzori, whose 16,798-foot Peak Margherita is highest of the Mountains of the Moon and right on the Equator. The rest of the party will fly to Africa in September, and the explorations will continue until April, 1948. Special mobile units will reach into the least-known regions of Uganda, Kenya, Tanganyika, Belgian Congo, and Zanzibar.

Explorers aboard a “Floating Island” will glide silently down lakes and rivers to catch in sound and film the slyest, most timid animals and birds. This silent craft, camouflaged with vegetation, will be armed with wire recorders and electronic cameras. The two floats of the device can be divided into sections for transport by trailer. A platform that folds in the middle, an electric outboard motor, two wheel-less bicycles with which natives can propel the craft, and heavy-duty storage batteries complete the craft. In addition, like all other mobile units employed by the expedition, it is fitted with two-way Frequency Modulation radio to maintain communications with the base camp and other traveling parties.

Spying on underwater life No less fascinating is the “Diving Eye,” a device that will be lowered to a depth of 30 feet in tropical waters to record sound and appearance of unknown water monsters, and of hippopotamuses and crocodiles as they battle for their prey. The Eye will be lowered from a floating platform of planks attached to eight or 10 native canoes. Three sections of the Eye form a 24-foot passage just big enough to let a man squeeze up or down a metal ladder. In the bottom section, three feet in diameter and six feet, two inches high, two persons can observe underwater life, or two cameras can be operated. Stroboscopic speedlight photography will “freeze” the fastest movement of underwater life.

Two “Eyebrows” have fittings for giant electric bulbs, arc bulbs, or stroboscopic speedlights, with glass placed at an angle to eliminate refraction and assure adequate lighting for underwater photography. Waterproof microphones will pick up sound for transmission to a wire recorder on the platform, and observers can send a running account of events to another recorder. They can even watch the bottom of lake or river through a central hole in heavy weights or metal doughnuts fitted to the base of the Eye.

Any belligerent crocodile or hippo that resents this prying into his private life will be attended to by riflemen stationed in canoes alongside the floating platform.

A new weapon of defense, the “Shriek-Gun,” is mounted on the expedition’s Bell 47-B helicopter for use if the aircraft is attacked while hovering low over big game in the jungles. This is a siren, pitched so high that no wild animal could stand it. The explorers couldn’t stand it, either, except that special protection has been devised for their ears.

The helicopter, christened Humming Bird, will carry cameras to take monotone, infrared, and full-color pictures of migrations of herds of elephants, buffaloes, and antelopes.

“Magic Eyes,” electronically controlled cameras that can be set anywhere, will be used to film unapproachable animals and birds. When anything appears in their fields, the cameras automatically take a picture every few seconds. “Magic Ears,” soundless, weatherproof recorders controlled by radio, will automatically pick up and preserve animal and human sounds from any distance up to a mile. The combination of Eyes and Ears is expected to gather a startling, intimate record of the life, speech, and hunting feats of the natives.

Reaching beyond the jungle, the expedition will explore the invisible air waves over it to establish a pattern of behavior for radio in the tropics. Radio noise measurements will be made daily, and test signals will be transmitted every day to determine the amount of selective fading and multi-path transmission common at the Equator. A main station at the base camp will maintain a regular schedule of short-wave transmissions to amateurs from four directional antennas that will blanket the world. One of the aerial towers is visible through the radio-shack window in the photograph at the right.

A mobile unit, the “Shack-on-Wheels,” will carry the most powerful mobile transmitter ever built.

Another unit, the “Rolling Lab,” will process film daily to prevent deterioration and allow a running check on photographic results.

No sport for pikers There will be 11 to 15 persons in the expedition: Gatti, his wife, a pilot and mechanic for the helicopter, a scientist, electrical engineers, and radio operators. The cost of such an expedition is staggering. Base camp and equipment alone run into hundreds of thousands of dollars. Each member of the expedition represents an expenditure of $10,000 in addition to salary—air transportation from the United States to Uganda and return, tropical clothing and camp equipment, cost of native boys (cooks, tent boys, table boys, wash boys, safari porters, and multitudinous other boys). Food is no small item, including much that must be taken to Africa from the United States. Other heavy expenditures include Lloyd’s insurance for the duration of the expedition, medical tests, injections preparatory to departure, and medical care for the party in Africa.

In 1940, Commander Gatti wrote about his adventures with the Jungle Yachts, concluding: “The moment had arrived when our long jungle career was closing.”

Today he takes back that statement, with pleasure.