Modern Mechanix
Issue: Oct, 1930
Posted in: Crime and Police, Origins
8 Comments on SCIENCE on the Trail of Crime (Oct, 1930) 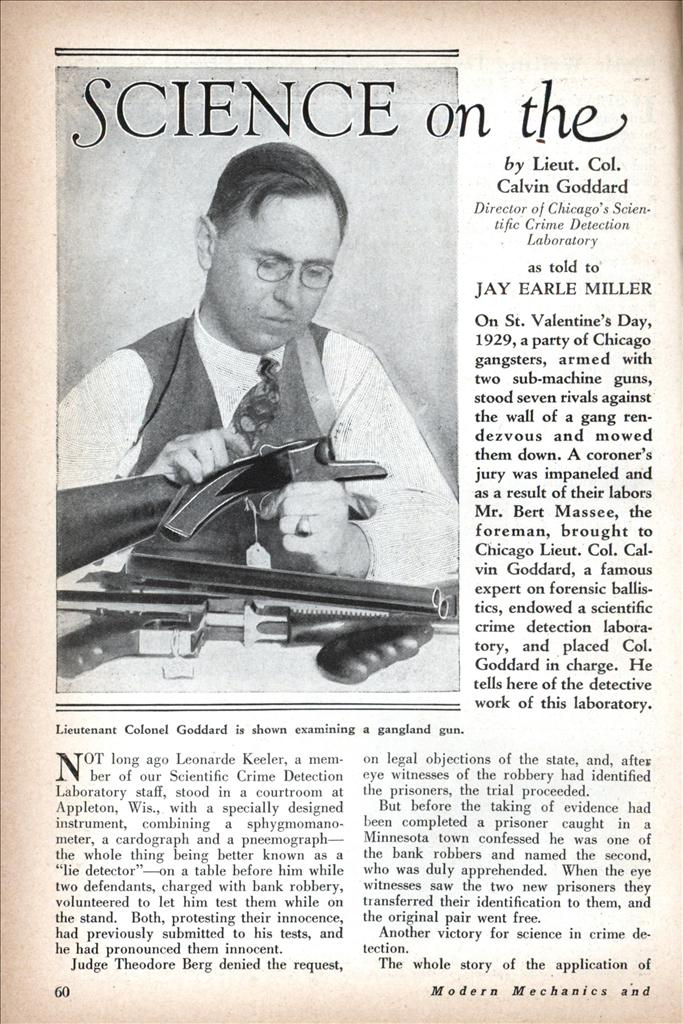 SCIENCE on the Trail of Crime

On St. Valentine’s Day, 1929, a party of Chicago gangsters, armed with two sub-machine guns, stood seven rivals against the wall of a gang rendezvous and mowed them down. A coroner’s jury was impaneled and as a result of their labors Mr. Bert Mas see, the foreman, brought to Chicago Lieut. Col. Calvin Goddard, a famous expert on forensic ballistics, endowed a scientific crime detection laboratory, and placed Col. Goddard in charge. He tells here of the detective work of this laboratory.

NOT long ago Leonarde Keeler, a member of our Scientific Crime Detection Laboratory staff, stood in a courtroom at Appleton, Wis., with a specially designed instrument, combining a sphygmomanometer, a cardograph and a pneemograph— the whole thing being better known as a “lie detector”—on a table before him while two defendants, charged with bank robbery, volunteered to let him test them while on the stand. Both, protesting their innocence, had previously submitted to his tests, and he had pronounced them innocent.

Judge Theodore Berg denied the request, on legal objections of the state, and, after eye witnesses of the robbery had identified the prisoners, the trial proceeded.

But before the taking of evidence had been completed a prisoner caught in a Minnesota town confessed he was one of the bank robbers and named the second, who was duly apprehended. When the eye witnesses saw the two new prisoners they transferred their identification to them, and the original pair went free.

Another victory for science in crime detection.

The whole story of the application of science in crime detection—except as it applies to fingerprint identification-—is practically a closed book to most American judges, lawyers, police, and juries. Fingerprints won recognition after a hard fight, but the “lie detector” is still frowned on by courts as a violation of the constitutional provision that a man cannot be forced to give evidence against himself.

The principle of the lie detector is quite simple, in fact, in various forms the machine is in daily use by physicians to measure blood pressure. In Keeler’s development of the instrument for the determination of the difference between truth and lies the changes in the subject’s blood pressure and respiration—which always accompany attempted deception—are charted by pens on a strip of moving paper.

The machine is not a third degree device, since it requires the consent and cooperation of the subject, at least to the extent of sitting quietly and holding one arm still. Denied the right to use the testimony of the machine in court, we use the detector as a substitute for the third degree. The suspect is first tested with his back to the machine, and, if the hills and dales of the chart indicate he is lying, he is then turned around and permitted to see the pen pointing out his lies as he repeats them. In seventy-five per cent of the cases where a suspect has watched the pen jump up and draw a peak on the paper every time he tells a lie a confession, which could be used in evidence, has resulted.

The lie detector did get court recognition in a rather amusing way just last week. A Chicago policeman was fined $50 in probate court for the theft of a valuable canary from the estate of a deceased person. With another officer he had been assigned to guard the effects of the wonman, a suicide. The pet canary disappeared and there was a hue and a cry. A few days later a dead canary was found in the house. The officers claimed the bird had escaped, then flew back and dropped dead, but a friend of the owner insisted the dead bird was not the missing one.

The lie detector indicated that one officer knew nothing about the missing bird, but that the other did. On the strength of this, the court ordered the man to pay $50 to the estate.

Chicago is a particularly good center for my own specialty — forensic ballistics, or the legal identification of guns and bullets. While some seventeen other American cities have larger murder ratios than Chicago, few receive the unfortunate publicity in connection with homicides by firearms that Chicago does, due to the gang wars. In the case which brought me to Chicago, the St. Valentine’s day massacre, seventy shells, many bullets and other evidence was found at the scene. Examination under the microscope showed the bullets had been fired from two different guns, for every gun leaves different markings on both shells and bullets. The markings on both bullets and shells showed further that both weapons were Thompson sub-machine guns.

Nearly a year later a man involved in a trivial traffic accident in a Michigan town killed a policeman who attempted to question him, and then fled. In his home an arsenal was found, including two machine guns. We fired test bullets from the weapons, and proved they were the guns used in the St. Valentine’s day affair.

Forensic ballistics is an exact science, and is so recognized by our courts. I have testified in many cases in the past several years, usually starting with a talk to the jury on gun making, showing the impossibility of making two guns which will leave identical marks on shells and bullets.

I think the most interesting case I ever had was one in Newark, N. J., some years ago. There had been a series of burglaries, all committed in the same way, by a man who entered homes while the family was away, breaking in through a basement window.

In one robbery a man and his sister were sitting in a shaded room on the top floor when they heard a noise downstairs. The man went to investigate, was shot, and died later in the hospital.

A week later a woman was found in possession of some jewelry stolen in another of the robbery series. She confessed she had received the stuff from her husband, and also admitted that in the same robbery he had stolen a gun, which he had spent some time in cleaning. On the night of the murder he had gone out with the gun, had returned breathless, with blood on his overcoat, and claimed the police had chased him and he had thrown the weapon away.

The police questioned the owner of the revolver, and he finally recalled having shot one bullet into a flower bed on New Year’s eve two years before. The flower bed was dug up and screened, and the bullet found. With that bullet, and the one taken from, the murdered man, they came to me.

Within a few hours I determined that both bullets had been made by the Peters Cartridge Company, that both were of 38 calibre, that both had been fired from a Smith & Wesson revolver, one from a dirty gun and the other from a gun after it had been cleaned, and that the same gun was used in both cases.

With this evidence, and despite the fact the missing weapon was never found, we obtained a first degree murder conviction.

Our laboratory is a research institution entirely, and, while we are affiliated with Northwestern University, we do not as yet teach methods of crime detection, aside from lectures to police lieutenants, detectives, and assistant state’s attorneys. We are subject to call at any time to investigate any case in Chicago or Cook county, without charge to the government, and also send men frequently to other cities, for which a fee is charged.

The latest addition to our staff is Inspector Ferdinand Watzek, a famous “moulage” expert of twenty years’ service on the detective force of Vienna, Austria. Moulage is the art of preserving exact casts of any object. If a burglar pauses to take a bite from an apple on the sideboard while collecting the family silver, we can reproduce the apple in an exact wax cast, permanently preserving his teeth marks for comparison with teeth casts of suspects. A burglar’s jimmy mark on a door or window can be preserved for comparison, under a microscope, with a jimmy; foot prints cast for future comparison with shoes, or any part of the body, or the entire body, permanently copied. In Europe these life-like casts of murdered persons are often made for future identification, or use in courts. They are so perfectly made and colored it is impossible without close examination to detect them from a real body.

Besides making casts, Watzek also is an expert on finger-printing, identification of handwriting, and the microscopic study of hair, dust, textiles, etc. Dust particles found in the cuff of a suspect’s trousers, on his clothes, or in the wax of his ear has often been sufficient to solve baffling mysteries abroad, and now we are prepared to do the same thing here. We also have our own expert on poisons and chemical analysis, Dr. C. W. Muehlberger, assistant director of the laboratory and former state toxicologist of Wisconsin, where for seven years he made scores of analyses in autopsy cases and obtained numerous convictions.

He is just now introducing in America a chemical test for intoxication which has been used for some time in England. Eye witness testimony about the degree of a person’s state of intoxication or testimony as to the amount of liquor consumed, is seldom satisfactory—the first because witnesses differ, and the second because ability to “carry one’s liquor” varies so widely. In the chemical test a portion of the chemical is mixed with a sample of kidney secretion, and the mixture turns color in proportion to the amount of alcohol in the blood, and therefore circulating to the brain. A man who becomes drunk on one drink, and one who gets equally drunk on a quart, will both show the same amount of alcohol in the blood stream, so this is an exact index of the degree of drunkenness.

In our lie detector we have one instrument which no European police department as yet has, but it will take at least a generation to get scientific crime detection established in America on a footing comparable to that practiced in London, Paris, Lyons, Madrid, Vienna, Rome and other foreign cities, and to get the courts and law makers to recognize the validity of scientific evidence.