Spraying Mantis is a fantastic name for a crop duster. 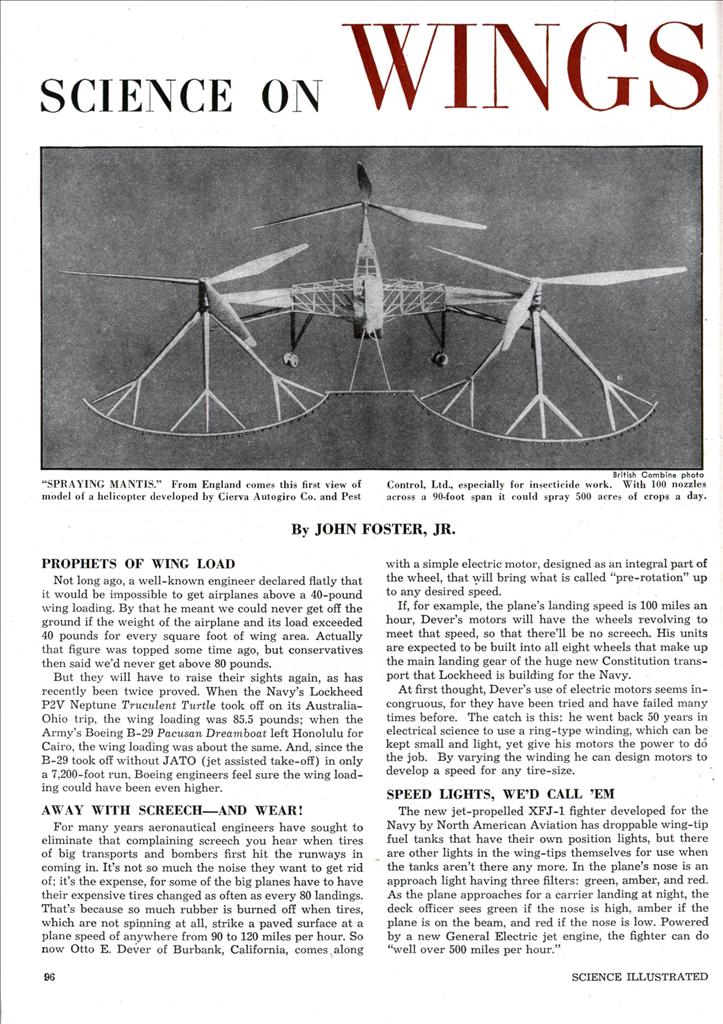 PROPHETS OF WING LOAD Not long ago, a well-known engineer declared flatly that it would be impossible to get airplanes above a 40-pound wing loading. By that he meant we could never get off the ground if the weight of the airplane and its load exceeded 40 pounds for every square foot of wing area. Actually that figure was topped some time ago, but conservatives then said we’d never get above 80 pounds.

But they will have to raise their sights again, as has recently been twice proved. When the Navy’s Lockheed P2V Neptune Truculent Turtle took off on its Australia-Ohio trip, the wing loading was 85.5 pounds; when the Army’s Boeing B-29 Pacusan Dreamboat left Honolulu for Cairo, the wing loading was about the same. And, since the B-29 took off without JATO (jet assisted take-off) in only a 7,200-foot run, Boeing engineers feel sure the wing loading could have been even higher.

For many years aeronautical engineers have sought to eliminate that complaining screech you hear when tires of big transports and bombers first hit the runways in coming in. It’s not so much the noise they want to get rid of; it’s the expense, for some of the big planes have to have their expensive tires changed as often as every 80 landings. That’s because so much rubber is burned off when tires, which are not spinning at all, strike a paved surface at a plane speed of anywhere from 90 to 120 miles per hour. So now Otto E. Dever of Burbank, California, comes along with a simple electric motor, designed as an integral part of the wheel, that will bring what is called “pre-rotation” up to any desired speed.

If, for example, the plane’s landing speed is 100 miles an hour, Dever’s motors will have the wheels revolving to meet that speed, so that there’ll be no screech. His units are expected to be built into all eight wheels that make up the main landing gear of the huge new Constitution transport that Lockheed is building for the Navy.

At first thought, Dever’s use of electric motors seems incongruous, for they have been tried and have failed many times before. The catch is this: he went back 50 years in electrical science to use a ring-type winding, which can be kept small and light, yet give his motors the power to do the job. By varying the winding he can design motors to develop a speed for any tire-size.

The new jet-propelled XFJ-1 fighter developed for the Navy by North American Aviation has droppable wing-tip fuel tanks that have their own position lights, but there are other lights in the wing-tips themselves for use when the tanks aren’t there any more. In the plane’s nose is an approach light having three filters: green, amber, and red. As the plane approaches for a carrier landing at night, the deck officer sees green if the nose is high, amber if the plane is on the beam, and red if the nose is low. Powered by a new General Electric jet engine, the fighter can do “well over 500 miles per hour.”